When musicians are asked to describe their band’s sound, some answers come to be expected. They might list their influences, maybe some genres they like to blend to create their signature musical concoction. But something you don’t expect to hear? 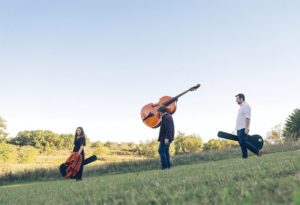 Solomon said “mom rock” — though he originally brought it up jokingly — seems to describe his band’s easygoing, rock-meets-country style, especially considering the impact his mother’s music taste had on his own preferences growing up. Another term, according to Solomon, that might describe The Empty Pockets is “Ya’llternative.”

Jokes aside, The Empty Pockets have a sound that’s attracted national praise, having been described by Rolling Stone as “polished yet rootsy.” It’s easy to see why, as Solomon (guitar, vocals), Nate Bellon (bass, vocals), Adam Balasco (drums) and Erika Brett (keyboard, vocals) combine story and sound to create a carefree roots-rock feel.

This is especially true for the band’s latest release, “Tanglewoods,” which showcases The Empty Pockets’ signature harmonies, highlighted by Brett’s memorable powerhouse pipes. Solomon said the album’s strength lies in its simplicity.

“It’s a freer album than anything we’ve ever made, and that made us write better,” he said. “(Tanglewoods) goes against the grain of so much pop music. We didn’t use any of the tools and the tricks of modern day.”

The Empty Pockets have also found success serving as a band for famous frontmen like Kenny Loggins, Al Stewart and Simon Kirke (the drummer for Bad Company). Solomon said he always admired The Band, which got its start backing up the likes of Bob Dylan and Van Morrison.

“I always loved that idea so we embraced that,” Solomon said, adding that while the modern music industry is so competitive, The Empty Pockets uphold a philosophy of support. “We feel very strongly that a rising tide raises all ships.”

Bonners Ferry is the latest stop for a band that’s been touring for 12 years. Even though it’s not always easy, Solomon he and the rest of The Empty Pockets genuinely look forward to hitting the road and playing venues off the beaten path.

“It’s a really hard life. There’s an element of our name that’s just dead serious. So if you don’t love it — being on the road, meeting tons of different people — it’s a stupid idea to do and not love,” Solomon said. “There are a lot of cool elements about what we do. We embrace all the parts. We love it.”

Tickets to the April 13 Pearl Theater show are $12 in advance, $15 at the door and $5 for students. Get tickets in advance at Mountain Mike’s, Bonners Books or www.thepearltheater.org. The doors and cafe open at 6 p.m., and music begins with opener Shiloh Rising at 7 p.m.

Learn more about The Empty Pockets and hear the band’s tunes at www.theemptypockets.com.