An ode to the finest flat-bottomed craft on Pend Oreille

When I brought my then-girlfriend (now-wife of almost 14 years) to Sandpoint for the first time in 2002 or thereabouts, she said that my childhood must have been like something out of Huckleberry Finn or Tom Sawyer. Fair enough, she said that while I had her standing on a raft that my dad, brother and I built back in the mid-1990s, and I was poling/paddling us up Fry Creek. 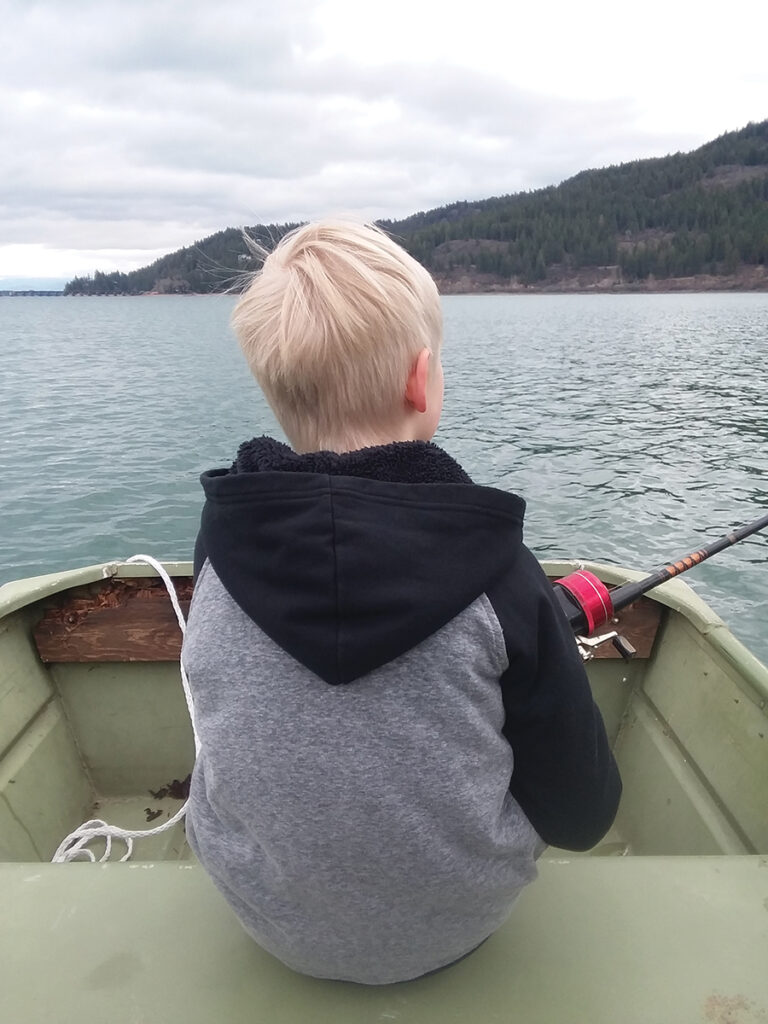 There are more dramatic bodies of water than Fry Creek, but few that I know better — at least I did in the old days before it was banked up with McMansions. As it is, I’ve been mucking around on Fry Creek for my whole life — one time while ice skating we found a beaver frozen dead in the ice, then chipped it out like Ötzi the Iceman, only to let it rot in a comedy of errors in a sink over the summer at Sagle Elementary School. But that’s another story.

My grandmother, whom I miss daily, lived for my whole life in a little lakeside house with access to Fry Creek, and my brother and I and sometimes our assorted friends spent every summer from the 1980s onward messing around there. We’d swim, fish and float various watercraft on the creek, chucking goose-poop-filled balls of mud at each other and intentionally sinking our favorite plaything: the Duck Boat.

Yes, the Duck Boat. An old olive-drab, three-seat, flat-bottomed aluminum skiff that my dad bought when he was a kid and, apparently at some point, used to hunt ducks. Hence its name, though none of us have ever hunted ducks from it nor ever saw my dad do so.

My brother and I used to take the Duck Boat out during ferocious storms that blew in from the north, seemingly off the very peak of Roman Nose, and ram its square bow into the huge white caps. You’d look over your shoulder, drenched in rain and wash and heaving against the oars, and see the train bridge wrench up and down as the boat guttered out in the waves, only to be thrown high atop the next swell. Our grandma was not amused — especially when there was lightning.

Anyway, we never got sizzled.

The best feature of the Duck Boat, at least according to a bunch of grubby 10- to 13-year-olds, was that you could pull out the stern plug and sit in it while it slowly sank. And believe me, the Duck Boat was not built to sink. It took some doing.

The fun of that, of course, was letting it go down, then swimming to the bottom to haul it up. One time, my brother and one of his buddies sank it so deep in the mire of Fry Creek that there was some speculation about whether we could ever get it up again. We stood on the busted boards of our old family dock on Fry Creek and scratched our heads for a long time. We considered the probability of getting tangled in the weeds down there and never coming up again. I considered whether the bass in there would eat a corpse. More important, we thought about how pissed off grandma would be that we lost the Duck Boat in the middle of Fry Creek and how hard it would be to dig it out of that stinking mud come drawdown in the fall.

Undaunted, my brother’s friend — a beast of a man even then — sucked in a Viking-sized lungful of air and muscled the Duck Boat up from the muck after what seemed like an impossible amount of time underwater. We joked for years that he might have gotten the bends.

Another time, I took a very young Paul Gunter — music teacher, musician and Festival Big Boss — on a short jaunt up Fry Creek only to strand him in the Duck Boat with no plug. It was a dirty trick, and I feel bad about it to this day. Yet, no one got hurt. Though a Canada goose bit me on the bank opposite the dock, so maybe someone did get hurt.

Then there was the time my friend, Brandon Johnson, and I — then-middle-schoolers — rowed up to the little island past the Lignite Road bridge and, midstream, bumped into a veritable yacht loaded with cute girls. Stunned, and sitting in the least sexy of watercraft, we tried to play it cool. At least, I did. Brandon stood up as if possessed, a glaze on his eyes, and raised his hand in a seeming effort to throw a jaunty wave. Instead, he made a motion like turning a doorknob.

The raucous bikini-clad yacht loungers, who had up to that point been waving and hooting at us, fell silent. I fell silent, too. Brandon was in a trance, so who knows what he was thinking. He made his doorknob move and slowly sat down. We rarely spoke of it afterward.

Not too long ago, I forced my kids to take a trip up and down Fry Creek with me on the Duck Boat. We fished, ate sandwiches and candy bars, and didn’t catch a darn thing (maybe a nibble or two, but most likely bumping bottom). Still, we saw an osprey take a fish, picked up some trash, scored a half-inflated float tube and those poor children had to listen to all of the aforementioned stories.

Sitting on the Duck Boat with my kids, I felt a bit of what I felt back when I was a kid, too — especially when my son wanted to row us to shore. Some people feel true independence when they get their driver’s license. I felt that way with the Duck Boat. It has always been my direct line to Lake Pend Oreille and, by extension, the motive power of myself.

After being away from Sandpoint for the better part of 10 years, when my family and I moved back in 2019 one of the first things I did was rush to the old cabin and haul out the Duck Boat. Each Thursday, in the pre-coronavirus days, I would end my Reader delivery route with a visit to the family patch and sit by the water. This past winter, I wrestled the Duck Boat down from its traditional perch atop a couple of old logs and hauled it across the rocks to the then-very low waterline.

It was a rough day on the water but sunny. Snow everywhere on the surrounding mountains. I pushed out, pulling the oars against the waves and puffing through my pounds of wintertime beer fat. I rowed to a point equivalent with the center of the Long Bridge and sat for a long time, letting the inevitable current draw me back to shore. There, I thought, you really can go home again.