For a provocateur, Scott Herndon is unexpectedly calm and articulate.

Sporting a long beard and speaking in a measured tone, he communicates philosophical ideas that, if overheard piecemeal, might sound like standard coffee shop conversation. It’s surprising, then, that these ideas form the foundation of the Abolitionist Society of North Idaho movement, a group that has aroused more local anger than perhaps any other in the past several years.

“It’s a free country, but it’s totally obnoxious that [this protester] is doing this,” said Steve Rookey, a bystander at a recent protest by abolitionist Chris Hutto. “He just wants to do his diatribe. He’s not willing to quote Jesus.”

While Herndon is cool and collected in conversation, abolitionist protests are anything but. The protesters’ aim is to be confrontational, an end achieved through images of dismembered fetuses and loud street preaching in locations with high foot traffic. The graphic imagery and aggressive approach are often quick to flair bystanders’ tempers, sometimes leading to shoving or fights.

“One time, someone grabbed our signs and tried to rip it out of our hands,” said Hutto. “One followed us and began howling and tried to unplug my microphone. Three people were making a ruckus and trying to drown out the noise we were making.”

Confrontations are all the more likely during protests at the Sandpoint Farmers’ Market. According to market president Kelsey Racicot, the graphic signs and use of voice amplification are hurting market turnout, limiting vendor sales and upsetting attendees. Now city officials are caught in a tricky dilemma: How can they protect the livelihoods and well-being of the majority while still respecting the First Amendment rights of the protesters?

A portrait of a movement 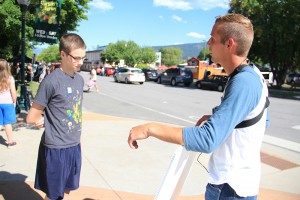 According to Herndon, a contractor who owns Herndon Homes in Sagle, the abolitionist movement sees no problem in comparing abortion to historical atrocities like American slavery or the Holocaust. For abolitionists, being opposed to abortion isn’t enough—they see the mere toleration of its legality as a moral failing.

“If people don’t recognize this as a gross injustice, I have to force it on people,” said Herndon.

The use of the term “abolitionist” is a deliberate reference to the likes of William Lloyd Garrison, a public agitator and social reformer who railed against American slavery in his newspaper, The Liberator. To Herndon and his cohorts, abortion is an evil equal to or even worse than slavery, an injustice so profound that the only moral response is to unsettle society until it is banned.

“When you’re trying to turn a culture around 180 degrees, it’s going to necessarily be disruptive,” Herndon said.

This ethos of confrontation manifests in the now-familiar anti-abortion trappings: the shouted scripture, the pamphleteering, the megaphones, the GoPro cameras capturing confrontations and altercations. The defining image is undoubtedly the gory photos that abolitionists often wave around children.

“I hope children see these images,” said Hutto. “I hope they have compassion to do what parents have failed to do—which is to abolish abortion.”

Within the broadly accepted strategy is room for improvisation. Based on Herndon’s extensive YouTube channel, his preferred approach is streetside sermonizing punctuated by one-on-one debates. Others, like abolitionist YouTuber Todd Bullis, are more aggressive, calling out passersby as murderers, evildoers and cowards.

The abolitionist movement is rooted in a literalist interpretation of evangelical Christianity. But surprisingly, the group’s targets are often fellow Christians, who Herndon believes should be rising en masse to demand the prohibition of abortion. And Herndon has nothing but disdain for the mainstream pro-life movement, which he calls “wrong, compromised and evil.”

Abolitionists frequently stage protests at churches before and after Sunday services, inevitably resulting in emotional families and impromptu theological debates. The point is to convict pro-lifers of their inadequate response to abortion, Herndon said.

The protests are by nature designed to elicit reactions, which Herndon said vary from day to day. Some people thank the abolitionists for their activism, but anger and frustration rule the more typical response. That’s particularly true of protests targeting youth outside high schools or high-attendance family events. Either way, Herndon isn’t worried that his extremism is hurting the anti-abortion movement.

“I’m so confident in the righteousness of my ideology that I’m convinced it will persuade upon [people] in the end,” he said.

While Herndon is confident in the justice of his cause, many of Sandpoint’s faith leaders are less convinced. In a letter sent to the Sandpoint Reader and the Bonner County Daily Bee, Pastor Eric Rust of Cedar Hills Church said that while he respects protesters’ zeal for the unborn, he sees their tactics as an act of cruelty to everyone else, including post-abortive individuals.

“I have a hard time wrapping my head around how the love and grace of Jesus Christ can be adequately communicated on poster board through pixelated images and words in red,” he wrote.

Likewise, Dan McDonald, an outspoken conservative and politician, is frustrated by the hawkish behavior. Although he is opposed to abortion, he believes the abolitionists’ methods are irresponsible and harmful.

“[One of the things] that bothers me is they make Christians and people opposed to abortion look bad,” McDonald said. “They’re leaving out the compassion and forgiveness that’s a part of Christianity. It’s all judgment.”

McDonald formed Citizens for Common Sense of Sandpoint, Idaho, a group of locals that primarily operates through a 369-member Facebook page. He took inspiration from citizens who thwarted the infamous Westboro Baptist Church by holding up sheets to block their messages from view at military funerals. The biggest obstacle is finding people who can mobilize on the spot when the protesters show up, McDonald said.

“Part of the problem we have is you get a lot of people that are angry, but when it comes time to show up, you only get a handful of people,” he added.

Nevertheless, the response team charted several successful counter demonstrations throughout 2015. They also protested Vern Spencer of Vern’s Veggies, a market vendor who McDonald said was an abolitionist supporter. When Spencer caught wind of the protest, he stopped selling produce at the market, McDonald added.

Despite the community response, farmers’ market vendors are increasingly frustrated by the diminished sales and turnout due to abolitionist protests this year. Last week, market vendors and officials asked the Sandpoint City Council for some kind of solution.

My rights versus yours

The city is in an awkward position when it comes to curbing abolitionist activity. While city officials want to protect local livelihoods and the cherished farmers’ market tradition, the First Amendment and Supreme Court precedent protects the abolitionists’ right to demonstrate on public ground.

According to Scot Campbell, Sandpoint city attorney, earlier efforts to keep protesters out of farmers’ market ended with Herndon threatening a lawsuit. The city paid to settle the matter without litigation in May 2015.

Following last week’s council meeting, Herndon fired another warning shot. In a letter to Mayor Shelby Rognstad, he claimed many of the reported complaints, including children being told they were going to hell, were inaccurate.

“… I will continue to encourage abolitionists at all times to wear body cameras in the event of false allegations against them, and we’ll make sure to tell our attorneys to keep their pencils sharp,” he wrote.

Even so, council members proposed adding aggressive handbilling to the city’s solicitation ordinance, a measure they passed at a special council meeting Wednesday night. Campbell said he’s also working on a noise ordinance, which will limit the abolitionists’ ability to amplify their message. At their meeting, council members speculated on other ordinances that might be used to protect the public.

“I feel like we’re so hesitant to even step in that direction, to question behaviors that are, in my personal opinion, absolutely abhorrent,” said Councilwoman Shannon Williamson.

As with the previous week, residents offered up emotional testimony about their frightened children and damaged business. Brenda Paddack argued that the public had a right to be protected from obscene images.

“They’re standing behind their freedom of speech, but they’re infringing on some of our rights as well, and our rights are being ignored,” she said

Herndon also offered testimony. While he said he wasn’t involved with recent farmers’ market protests, he had spoken to those involved and was told the voice amplification would stop. Nevertheless, he was concerned about the handbilling ordinance, saying the language was too vague to effectively protect First Amendment rights.

It remains to be seen whether the city will pursue additional measures beyond the handbilling and noise ordinances. As the popular adage goes, “My right to swing my fist ends where your nose begins.” The problem the city faces is legally determining how far the abolitionists can swing before they bloody the public.