84-unit development is a ‘huge win’ for employees, potential boon for Ponderay

When Schweitzer announced its Hemlock House employee housing project in Sandpoint last December, mountain officials hinted that there were “bigger projects” in the works. That turns out to have been an understatement, as Schweitzer unveiled plans for another workforce housing development on May 3, consisting of an 84-unit apartment complex in Ponderay that could provide a mix of seasonal and year-round accommodations for upwards of 200 of its employees.

And that’s just the first phase. The second phase will include even more housing — whether apartments or a mix of townhomes and apartments — additional open space and recreational areas, workout facilities and full-service daycare for employees’ children. 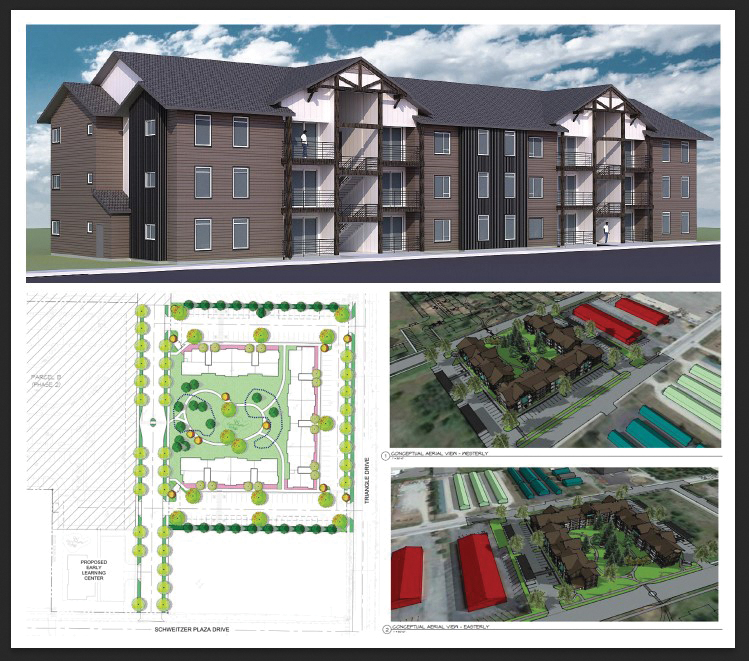 “I think it’s great that we have some of these larger employers looking at this model,” Ponderay Mayor Steve Geiger told the Reader.

Schweitzer Human Resources Director Scot Auld said the plan has been coming together for more than a year, as the housing affordability crunch has only gotten more dire.

“It was becoming a serious obstacle for our employees and even just our business operations,” he said. “We even lost managers over it as the housing boom started to drive people out.”

The Hemlock House project was a first step, Auld said, providing temporary housing for as many as 16 employees. That facility was full all winter long and “a great success, albeit small.”

“It was a great pilot project for us and to have the confidence that, yes, this is something we can do and need to do more of,” he added.

The Ponderay development took shape when developer Eastmark Capital approached Schweitzer about pursuing some projects on the mountain itself. Over the course of several conversations, the developer and Schweitzer officials came to the conclusion that partnering on workforce housing would benefit both parties. When Eastmark Capital told Schweitzer that it had an opportunity to make an offer on three parcels of undeveloped land covering three acres west of the intersection of Triangle Drive and Schweitzer Plaza Drive, it all came together.

According to Auld, the partners closed on the land last week and have lined up a contractor, with architectural renderings and plans going through the bid process. The Ponderay Planning and Zoning Department told the Reader that the project has already been awarded its special use permit and site plan approval, with the next step being the building permit, which should take a couple of weeks.

Auld said once the paperwork is in order and the site dries out, “we’re hoping to hit the ground running.”

The overall project is estimated at $22 million and completion of both phases is anticipated in at least 12 months. Employees may be taking up residence as early as summer 2023.

“Being able to offer our dedicated staff and their families a place to call home is a huge win for them and for us,” Schweitzer President and CEO Tom Chasse stated in a May 3 news release. “Our managers and frontline staff are the people who make Schweitzer, Schweitzer and being able to help them continue living in the heart of our community is extremely important to all of us.”

The apartments in Phase 1 will feature a mix of nine one-bedroom, 63 two-bedroom and 12 three-bedroom units, ranging in size from 600 to 1,100 square feet. Auld said that the plan is also to build in gear storage, provide walkways and green spaces, as well as emphasize pet-friendliness.

“Knowing our staff, ski people are dog people, so our goal is to make as many of these units pet friendly as possible,” he said.

Moving into Phase 2, one of the high priorities for the development is the inclusion of a full-service on-site daycare center — a critical need for employees not only at Schweitzer, but throughout the community.

As Auld explained, that expense or lack of availability — or both — functions to hinder employees from being able to work certain days or hours, or even work at all.

“It’s really keeping a lot of parents on the sidelines from joining the workforce,” he said, later adding, “Finding people who are able to work 40-plus hours a week is a challenge right now, so the goal here is to help people work more days and really be more full-time summer, winter and year round.”

While providing a much-needed on-ramp to affordable housing for Schweitzer employees — of which there are about 100 year-round and 750 during the winter peak season — the development is also expected to have a big impact on Ponderay itself.

Noting that the property is located immediately south of Walmart and north of Laughing Dog Brewing, as well as within walking distance of Yoke’s grocery store and Bonner Mall area retailers, Geiger said that, “As far as Ponderay is concerned I think it’s a great fit — right in the middle of all that shopping and easy access to Schweitzer, so it only makes sense.”

An influx of 200 or more new centrally located residents in the near-term — and potentially double that in the long-term — will almost certainly drive demand for amenities and redevelopment surrounding the project.

Geiger said that while Ponderay doesn’t have a downtown core, in the traditional sense, ongoing growth may well spur one to develop.

“That one project there, if it were to bring on 300 people that would be 25% of the population right there,” he said. “There’s so much opportunity out there right now.”

Schweitzer’s project isn’t the only signal of longer-term growth in Ponderay, as Geiger said the city issued more than 110 building permits last year and there are 450 housing units currently going through the process.

“We’ve never done that before,” he said. “Our town will practically double its population within three or four years once these things are all built.”

That would be a boon to the city, which with its population of 1,200 residents is also the workplace for 3,500 employees providing the basis for a $400 million-plus economy that contributes $24 million per year in taxes to Boise. However, because the revenue sharing model is based on population, Ponderay only receives back $125,000 per year.

All of that makes Schweitzer’s timing particularly important, said Geiger, who as a mayor has worked on issues of employee housing and as a business owner has struggled to find and retain workers. He said what Schweitzer and Eastmark Capital are doing in Ponderay is exactly what more employers need to be doing throughout the area, but they need to act fast to get ahead of the growth curve.

“Can you imagine the cost of living here in 20 to 30 years? This is what companies are going to have to do just to survive,” he said, later adding, “It’s going to be unattainable in another decade for some of these companies to do these things because of the cost. … And we’re going to be in serious trouble if we don’t do something.”

Auld agreed that time is of the essence — not only to serve the immediate needs of employees who are strapped by everything from sky-high rents to the cost of commuting long distances, but to help ensure some future stability for Schweitzer and its workers.

“We feel really confident in this. With the trend we’ve seen in the housing affordability or lack thereof in our area over the past couple of years, we may see some fluctuations or plateaus in pricing or availability over time, but I don’t anticipate us seeing a big reversal in the housing market,” he said. “It’s going to continue to make it difficult for working families to access affordable housing here, and I’m proud that Schweitzer has the ability and the willingness to take this big step that’s going to really benefit our employees.”