‘The city of our dreams,’ one school at a time

She lay in bed, musing about the churches, schools and civic centers that would one day replace the wild land that surrounded her cabin in every direction. She would be there to see it all happen, side by side with L.D. Someday she would get to see more of her husband, but for now she needed to sleep.

They traded shifts at the Northern Pacific depot at dawn. Her eyelids had just closed when the three taps came again at the dark window, tap, tap, tap… tap, tap, tap. She leapt up, threw on some clothing and went outside to investigate, searching the grounds with a revolver in her hand. Never knowing fear, she yelled out, “You can’t scare me!” 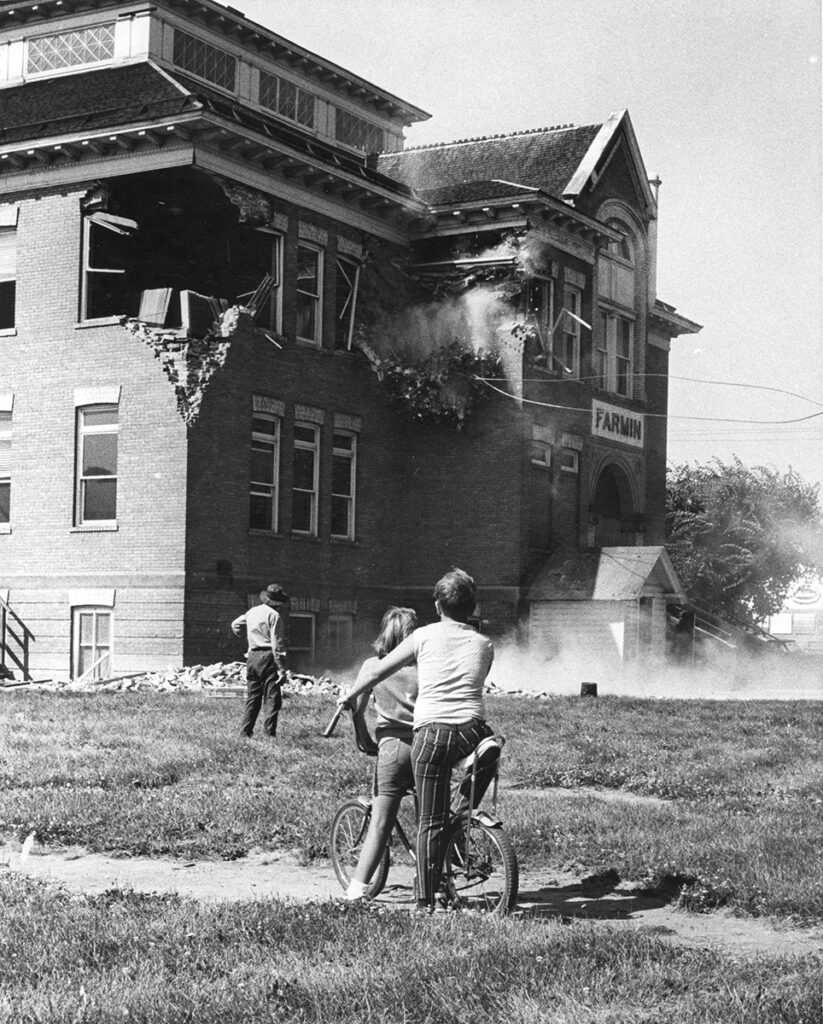 Photo of Farmin School being torn down. Photo first published in the Pend Oreille Review.

Ella Mae Farmin’s husband, L.D., worked nights as stationmaster of the depot, and she faced nightly harassment by a would-be “jumper” who tried to spook her off the land. That’s who’d been tapping at her window.

Considered by many as the civic mother of Sandpoint, Ella Mae, L.D. and their young son moved to Sandpoint so she and her husband could pursue opportunities with the Northern Pacific railroad. At the time, they could still apply for land in Bonner County through the Homestead Act, so the Farmins claimed 160 acres just west of Sand Creek for their own. If they worked the land for five years, it would be granted to them fair and square, so long as it wasn’t “jumped” by a squatter.

Back before Sandpoint was a town, it was merely a spur the railroad used to get sand for their locomotives. Then it became a Wild West depot stop on the new Northern Pacific railroad once the company completed the bridge across the lake. The entire town fit on the east side of Sand Creek. Restless and rootless men came and went in search of work or adventure. The railroad-leased land provided a hotel and other places to stay, hot meals, various dry goods, groceries and, of course, saloons. But no schools.

Eventually, workers for the railroad and the blossoming lumber industry poured in and now included settlers with families eager to put down roots. The Farmins were among the loudest voices demanding that children be educated and that saloon-goers go to church, but at that time there were no established schoolhouses or churches.

Sandpoint’s earliest known teacher, Pappy Smith, had been taking advantage of unused space around the railroad town (including a former saloon and dance hall) to lead several children in the “rudiments of education” as early as 1885. Now it was time to make a lasting commitment to education by building a proper schoolhouse.

After guarding it fiercely for years, the Farmins formalized their land claim and platted large portions of it as a town site on the west side of Sand Creek. In 1894, the community built the first schoolhouse on donated Farmin property at the corner of First Avenue and Church Street. The one-room structure served as the heart of town gatherings, with everyone looking forward to Christmas pageants and the yearly end-of-school picnic. Shortly thereafter, a four-room school named Central was built beside it. Many considered it an extravagant waste of money, saying that a building so large would “not be needed for years, if ever.” 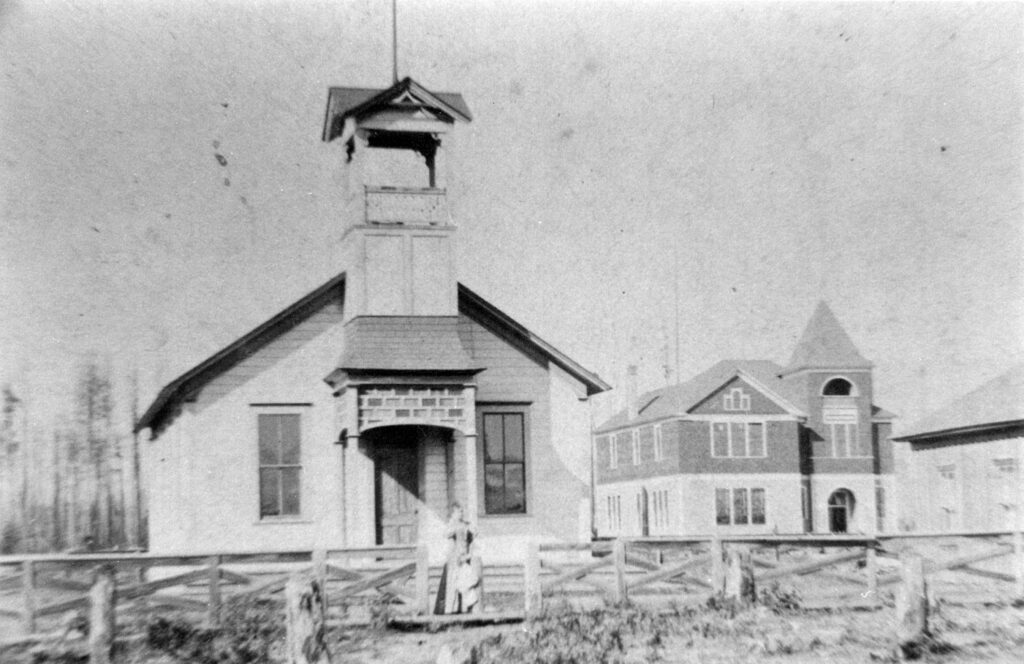 Sandpoint School, the first school building built for a school, as seen in 1898-1899. It was located at the northwest corner of First Avenue and Churcb Street. The building to the right is Central or Defenbach School, and the building in the corner is the teachers cottage. Donated by Lucille Brisboy.

Yet with the arrival of the Great Northern Railway in 1892 and Spokane International Railroad in 1906, Sandpoint had grown enough by 1907 to erect the grandest school building in the area — the three-story Farmin School.

The Farmin family intended to donate the large plot of land, but they had to raise funds for the building by selling another property. Always civic minded, Ella Mae thought the property should go to a local church, but they needed to raise $500 to purchase it. In her effort to help them fundraise, Ella Mae’s iron will was once more put to the test. After campaigning for donations, she was still $50 short when a wealthy saloon owner offered to make up the difference. As a teetotaler, Ella Mae was morally affronted, but “the temptation was too strong” and she conceded that “with the understanding that we are going to put you out of business just as quickly as we can, I will take the money, and thank you.”

With multiple schools in town, a formal school district was created — complete with a school board and superintendent, Henry T. Irion. Henry’s wife, Nell K. Irion, taught first grade at the new Farmin School and was regarded with awe, respect and a touch of fear by her students.

As Catherine Moon Littlefield remembered, “There were no exceptions to the rule of disciplining one’s bladder to coincide with recess.”

The Humbird school was one of the three, built in 1909 by the Humbird Lumber Company to accommodate the 80 families who worked at the mill and lived in “Milltown.” The beautiful brick building was eventually renamed Lincoln. It remains standing as Lake Pend Oreille High School.

The beautiful brick building on Euclid — today known as the Sandpoint Business and Events Center — started serving high-school students in 1922, graduating 36 seniors. Its last graduates enjoyed pomp and circumstance in 1954, numbering 121 — the largest senior class in its history. Happily, it still stands, mostly because it landed on the National Historic Buildings list for Idaho, and Baker Construction and Development had the vision to restore it to its grandeur.

Unfortunately, the same can’t be said for the iconic Farmin School. Despite its imposing façade, it seemed to suffer from structural deterioration. L.G. “Bud” Moon remembered playing basketball in the third-story gymnasium, that “it was shaking the whole building apart.” Conditions became so bad that, in the late ’60s, a hoax photo was published showing the school on fire while children waved from the windows. The effort to incite action (and perhaps alarm) worked, and the building was shortly thereafter sold and demolished.

Nothing remains of the grandest school of Sandpoint’s history, but Ella Mae’s vision can still be seen throughout the city and across the county. In her city of dreams, education is valued highly by the students, the parents, the teachers and the community members — even the saloon keepers.