Fifty years along the shore

The past and future of Edgewater resort

Since its donation to the city of Sandpoint by the Northern Pacific Railroad in 1922, City Beach has drawn tourists from around the world.

The Edgewater Resort has housed those tourists for about half of those nearly 100 years. Perched on the shoreline of Lake Pend Oreille near the gateway to City Beach, the hotel continues its long tradition as a family owned and operated business to this day. 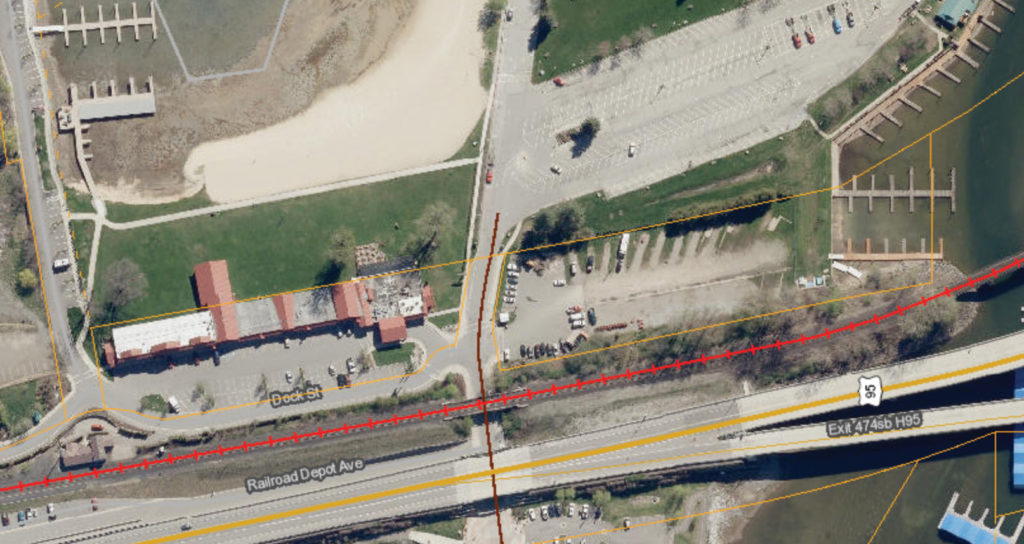 A map of the area in question, with property lines included. The byway is along the bottom of the photo and the lake is to the top. Courtesy city of Sandpoint.

But times are changing. The Sandpoint Parks and Recreation Department has big plans for expanding services and amenities at the beach. Meanwhile, the Cox family, which runs the Edgewater Best Western through its company Sand-Ida, plans to renovate the hotel and double its occupancy. A proposed land swap, slated for a final decision by the Sandpoint City Council later this year, could be the key to unlocking both potential futures.

“This deal works from the spirit of [a leasing agreement] we have with the city,” said Adrian Cox, one of the family members behind Sand-Ida. “It changes things up a fair bit, but functionally, it’s not so different from what we’ve had going on for decades.”

The early days of Sandpoint tourism

Almost as long as City Beach has attracted tourists, there has been a hotel on the land now occupied by the Edgewater. Before the Edgewater came along, travelers in need of shelter sought out the Lakeshore Tourist Park.

In the 1940s, tourism to Lake Pend Oreille was expanding rapidly. Several factors contributed to its heightened popularity. Beginning with widespread popularity of the Model T between 1908 and 1927, Americans were increasingly mobile. But it wasn’t until the 1930s when the modern U.S. Highway 95 provided a safe, comfortable route to Sandpoint for the car-owning population. A slew of magazine articles — including features in TIME and Life — boosted Lake Pend Oreille’s fame as an ideal fishing, boating and swimming destination. Events like the growing K&K Fishing Derby contributed to that reputation — especially after a Lake Pend Oreille angler bagged a record-setting, 37-pound Kamloops rainbow trout in 1947.

According to the Bonner County History Museum, the Lakeshore Tourist Park was among 27 resorts and hotels that popped up along the Lake Pend Oreille shoreline by the late 1940s. With its convenient location within Sandpoint next to City Beach, it soon became one of the most popular local lodging options.

“The park featured eight completely modern cabins with toilet and wash bowls, kitchens and a good mattress on every bed,” Hannah Combs and Chris Corpus of the Bonner County Historical Society wrote in a July 2020 article for the Reader. “It boasted a fine bathing beach and bath house. It helped that civic leaders solved the problem of the annual spring floods by cleaning up driftwood debris and raising the level of the beach.”

After the Lakeshore Tourist Park came the Northshore, a hotel that existed for only a few years. According to Adrian Cox, his grandfather, Bob Cox, purchased the bankrupt enterprise in the late 1960s, expanding it by 30 rooms and laying the foundation for what it is today.

Bob Cox served as a pivotal figure in Sandpoint during the ’50s and ’60s. A businessman whose influence grew with the town’s burgeoning reputation as a tourist destination, he was a player in the early days of Schweitzer Mountain Resort and the local hospitality industry. The elder Cox established Sand-Ida in the late 1950s, initially to manage the Travelers Motel.

“He was a pretty influential dude around town,” said Adrian.

After Bob Cox’s death in the 1980s, his son Allen — Adrian’s father — and his brother took over management of Sand-Ida. Adrian recalls being immersed in the hotels and convenience stores under the Sand-Ida umbrella.

“We definitely grew up filling pop machines and sweeping parking lots and things like that,” he said.

Shortly after Allen Cox died in a car accident in 1995, the business passed to Adrian and his four siblings, all of whom have an equal stake. In 1998, after years of running an in-house restaurant at the Edgewater, the Cox family leased out their dining and kitchen space to prominent local restaurateurs Jim Lippi and Barney Ballard. In 1999, Sand-Ida struck a franchise deal with Best Western to operate under the international brand’s banner.

Looking to the future

The Cox family sees continued great potential in the Edgewater and, over the past decade, they’ve aligned their business interests to pursue that potential. Two years ago, Sand-Ida sold the Quality Inn to invest resources in a planned expansion from the Edgewater’s existing 54 rooms.

“That’s quite small by hotel standards,” Cox said. “So that’s the main goal: Expand it, make it bigger.”

But where to expand? That’s where the land swap with the city of Sandpoint comes in. Under the terms of the proposed deal, the two entities would exchange the 2.15-acre Edgewater RV park property south of City Beach for the 1.5-acre green space that lies between the hotel and the waterfront. 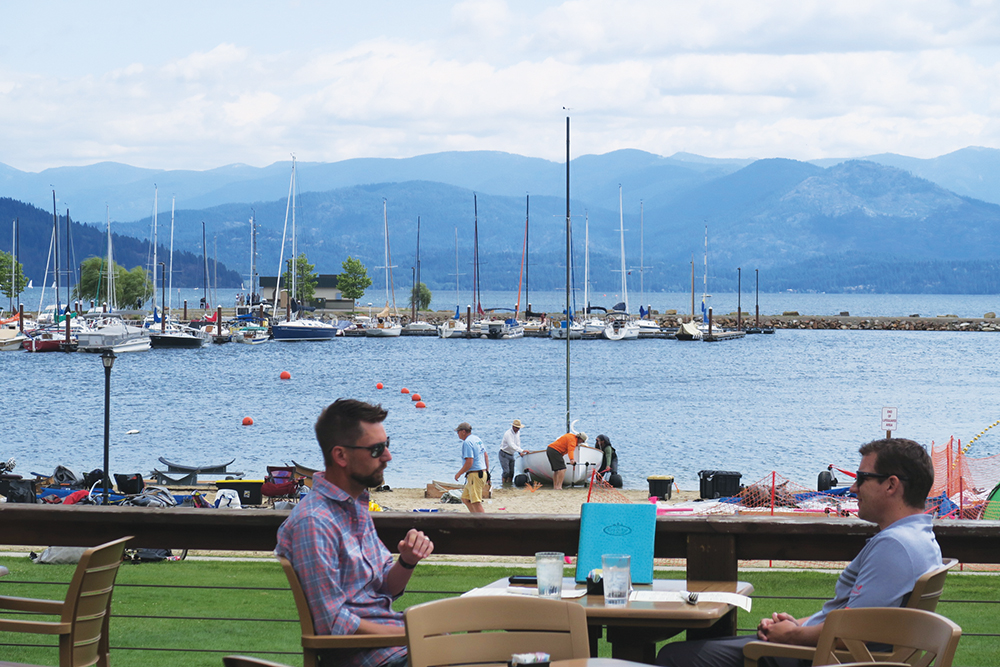 A table on the deck at Trinity at City Beach restaurant. Photo by Ben Olson.

“From an economic development perspective, the swap will support construction of a brand new vibrant, thriving hotel and restaurant that offers in-demand meeting and event space and contributes to our overall economy,” said Sandpoint City Administrator Jennifer Stapleton. “It is anticipated that the current structure will be demolished in September 2021 and the new hotel and restaurant will open 18 months later.”

“From a public park perspective, the land swap will allow the city to begin engineering and design to begin Phase 1 of the City Beach concept, which will likely be the new boat launch and parking area,” Stapleton added. “We have already identified potential grant funding that will support the project.”

The deal would give the Edgewater the space it needs to add rooms and, among other things, it allows the city to introduce dedicated boat trailer parking on Sand Creek — a move that would help alleviate much of City Beach’s parking congestion.

“That’s really one of the biggest problems at City Beach — the parking — so this works for everyone,” Cox said.

It also allows the Edgewater to expand without displacing popular local restaurant Trinity at City Beach. In fact, that’s the main reason Sand-Ida has pursued this particular route toward expansion, Cox said.

“We are very mindful that we want this to be an asset to the town,” he added.

Trinity owner Justin Dick said the swap will open many improvements for his restaurant. These include a new kitchen and expanded dining area with ADA compliance, expanded parking, energy-efficient heating and air conditioning and more.

“[This is] a great example of a public-private partnership for the benefit of our community, the city of Sandpoint and many local businesses besides Trinity and the hotel,” Dick said.

Yet, not everyone believes the land swap is in the best interest of all parties. Former Sandpoint Public Works Director Kody Van Dyk said the benefits of the land swap are weighted toward Sand-Ida, putting the city’s valuable green space in the hands of a private entity.

“The proposed City Beach Master Plan and Land Trade envision utilizing the RV Park for a boat launch and trailer parking,” Van Dyk said. “Access in and out of the RV Park is difficult and often blind to traffic entering City Beach from the west. In my opinion, the proposed RV Park utilization is dangerous and unnecessary. Moving the boat ramp is a sound idea, but moving it to the west end of existing city property at the beach is safer and less rife to conflict at the [railroad] bridge.”

Furthermore, Van Dyk said there are legal ambiguities built into the original donation of the green space to the city from Northern Pacific Railway. A corrected deed from May 1975 states: “should the premises cease to be used for park purposes … this instrument shall become null and void, and the premises immediately revert to the grantor, who may forthwith resume possession.”

Van Dyk said it’s unclear what this means for the proposed deal, and BNSF, the company that supplanted Northern Pacific, hasn’t returned his requests for comment.

According to Stapleton, the public will have a chance to share its thoughts on the proposed deal soon enough.

Should the deal go through, it will be the next big milestone for a hotel that has seen nearly 50 years of sunrises and sunsets along the waters of Lake Pend Oreille. Cox said he looks forward to watching how it all unfolds.

“That’s a pretty darn good compromise when you have a situation where everyone wins,” he said.