The 3/4-Minus Cykeltur: A wild ride through Idaho’s back roads

If you’re a bike enthusiast, there is no shortage of rides and races available in the west. Whether it’s road races like the CHAFE 150 Gran Fondo or closed-course hybrid events like cyclo-cross, there have never been as many opportunities for North Idaho bicyclists to gather in the name of two wheels. 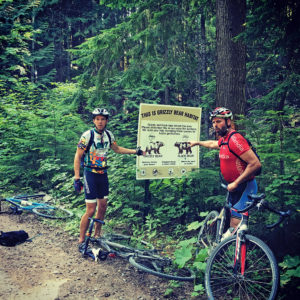 David Barth and Jason Meshberg stop to learn about bears on the “two-humper” route of the 3/4-Minus Cykeltur. Photo courtesy Syringa Cyclery.

Now there’s one more option to choose from. This one takes participants off the beaten path to some of the greatest back roads of Bonner County.

In its inaugural year, the 3/4-Minus Cykeltur (which is Danish for “bike ride”) hopes to satisfy a niche somewhere between road races and dirt circuit rides.

“It’s like a cross country cousin of a road ride,” said Charles Mortensen, whose shop Syringa Cyclery is an event organizer. “It’s actually one of the most popular cycling events going on right now. It’s like cyclo-cross, but if you let the riders loose on the populace instead of a closed course.”

“A lot of people will use gravel bikes, which are like a road bike with knobby tires,” he said. “It’s a happy medium between a cyclo-cross and a road bike – but people can do it on any bike they want. A lot of people just ride their mountain bikes for this event.”

The ride starts (and finishes) on Oak Street between Syringa Cyclery and Matchwood Brewing. From there, riders will wind out of town via Boyer Avenue to Selle Road where they will jump the highway and head toward Selle Valley, hitting “every gravel road we can,” Mortensen said.

From there, it will meander throughout Selle Valley toward Rapid Lightning Road, back through Ponderay and across the Popsicle Bridge, through the CycloCross course and back to Oak Street. The total length of the “two-humper” will be 65 miles with two climbs. The “single-humper” is a route with slightly less distance at 48 miles and only one incline.

“We are still a rural society here …  there are a lot of these underutilized gravel roads,” said Jason Meshberg, who assisted Mortensen in planning for the event. “It’s become quite popular over the last few years to take on the identity of the region you’re in and run riders over these old farm and agricultural roads.”

Meshberg said another draw for these rides are the ever-changing terrain of these little-traveled back roads.

“Some are well-kept, some are under-kept,” Meshberg said. “It reminds me of, just this last weekend, the Paris-Roubex (bike race) was running and they ride over all these old Roman roads and cobblestones, some that have been bombed out over wartimes, and it becomes the personality of the ride. It requires a bit more of a special setup to get over those roads. It requires you to pilot your machine, to get it across whatever road we’re putting you on.”

There will be commercial chip timing and awards for men’s and women’s divisions for each leg, but Mortensen said that it wasn’t a race, but a ride. There will be a more casual atmosphere with rest stops at Western Pleasure Guest Ranch, Pack River Store and another at a private residence on Grouse Creek Rd.

The best part? All proceeds after event costs will benefit the Pend Oreille Pedalers, a trail-building volunteer group in Bonner County.

“It takes a lot of work and money to build trails, especially in alpine regions like the Watershed Crest Trail,” Mortensen said.

“At the heart of it, we’re just trying to find a good excuse to raise a few dollars for the Pedalers,” Meshberg said. “I’m hoping that some of these locals will get put on roads they’ve never ridden before.”

Mortensen said events like these aren’t just a good time, they are a boost to a town’s economy.

“We already have 75 people signed up, and we more than a 100 by ride day,” he said. “We have people already registered from Canada, Montana, Washington and Idaho. These people will spend the weekend here, visit shops and restaurants, stay in hotels and campgrounds. It really shines a light on the town for people that haven’t been here before.”

While this is the inaugural event, Mortensen said he plans to make this ride an annual thing.

“It’s a good time of year for this,” he said. “The city brought up that they really liked we were doing it in the shoulder season when not a lot is going on. And as far as the cycling community goes, this is a great training ride for upcoming races, like CHAFE and the STOKR ride in Libby the weekend after ours.”

“We’ve also gotten great support from the city of Sandpoint, who will provide a police escort for the start all the way to the fairgrounds, and the county for helping with the encroachment permit,” Mortensen said.

Packet pick-ups and registration will take place at Matchwood Brewing Co. on Friday, May 3, from 4-6 p.m. and again Saturday, May 4, from 8:30-9:30 a.m. The race will start at 10 a.m. on May 4 and will finish with a party and awards ceremony at Matchwood Brewing Co. with live music, food and drink, as well as a raffle for an All-City Cosmic Stallion, an all road/gravel bike worth over $2,000. Tickets are only $5 each or five for $20.