Teacher runs marathon for her students

When the going gets tough, the tough go running

Ask any teacher what the most difficult part of the lockdown has been and invariably they’ll respond that they miss their students.

When Sandpoint Waldorf School teacher Clare Stansberry first saw school and events canceled across the region in March, she said she spent a lot of sleepless nights wondering what was going to happen.

“There was this cascading feeling of ‘everything has been canceled,’” Stansberry told the Reader. 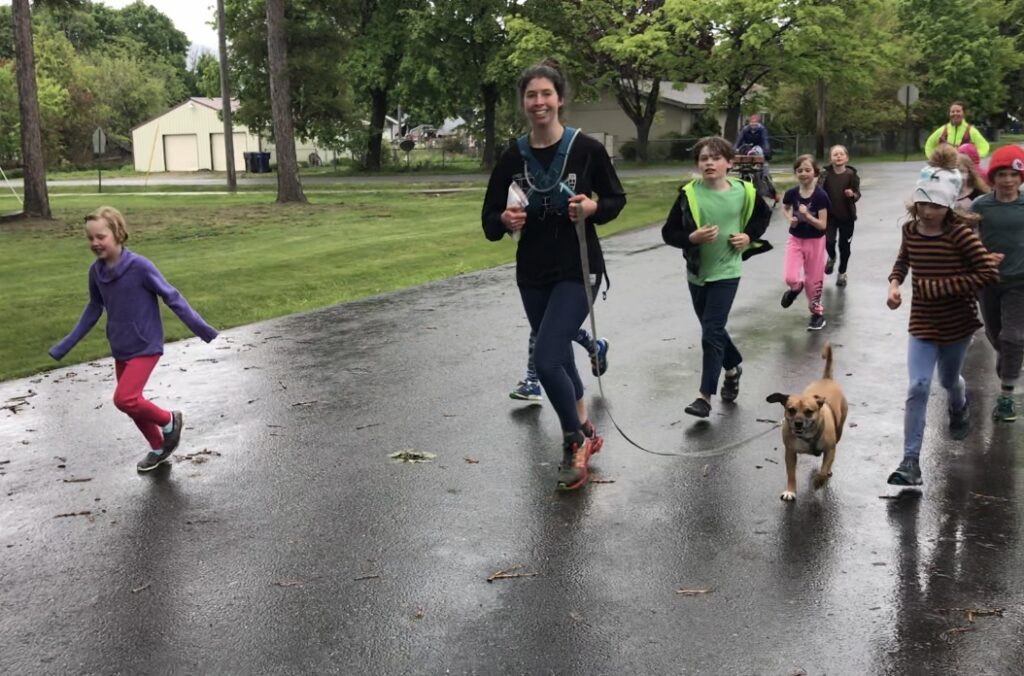 Clare Stansberry (in black) and Renee Nigon (in yellow/green) run a marathon May 22 past all of Stansberry’s students’ homes. Photo by Kirsten Hollan.

At one point, she awoke one night and formulated an idea that could give her students something positive in which to take part: she would run a marathon throughout Bonner County and plan the route to pass by every one of her students’ homes so she could say hello to them. More important, she wanted to give them something to look forward to.

“I wondered if I could go to everybody’s house in one run,” Stansberry said. “In the morning, I started mapping things on my computer and realized it was remarkably close to a marathon to go past everyone’s house.”

The next morning, Stansberry mentioned the plan to her running buddy — Renee Nigon, who teaches sixth grade at Farmin-Stidwell Elementary School — and was pleased when Nigon agreed to accompany her on the cross-county trek.

“We had a goal now,” Stansberry said. “There was something on the calendar that couldn’t get canceled.”

Working with a seven-week preparation timeline was a bit rushed, Stansberry said, but since the route was on flat ground and they wouldn’t be in a hurry, they felt it was enough to prepare. Stansberry said she ran her first marathon last summer with Nigon, which turned out to be a challenging experience. This route was destined to be much kinder, despite a chance of rain showers in the forecast.

Stansberry planned a route to pass all 16 of her students’ houses and informed them and their families that the marathon was on for Friday, May 22. Only one students’ home was located too far outside of Sandpoint to be plausible, so Stansberry asked them if they wouldn’t mind driving into Sandpoint along the route so that she could visit them, too. The student’s family happily obliged. 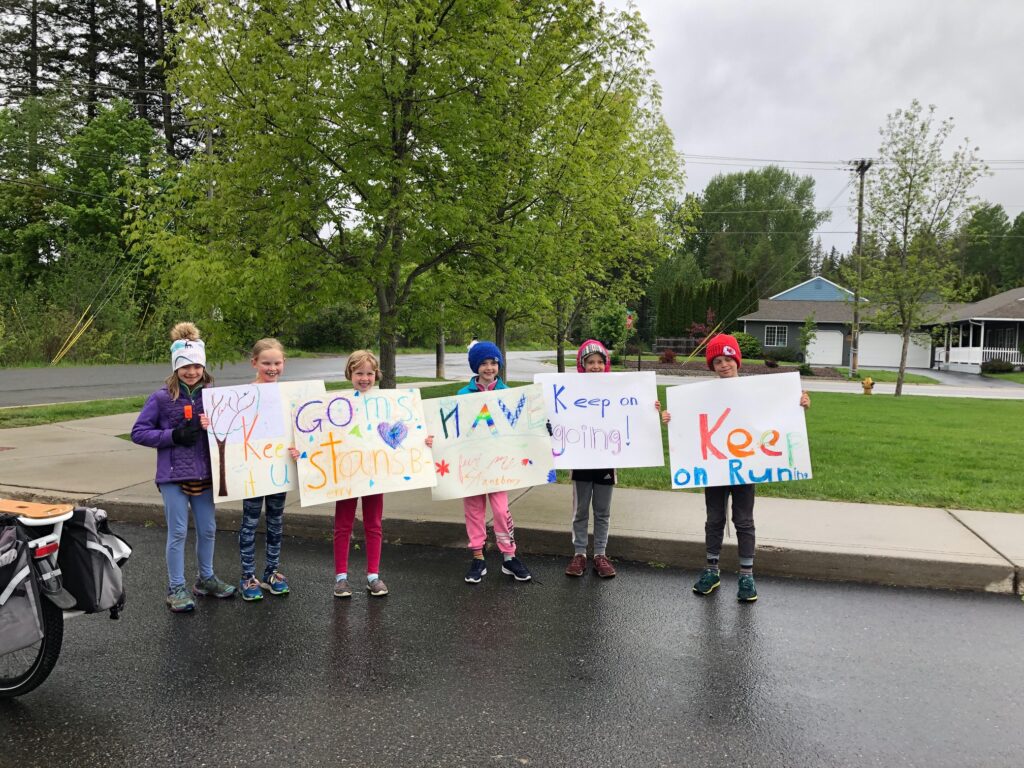 Stansberry’s route began in Sagle, just past Sagle Elementary School, then wound north along the Long Bridge past Memorial Field, onto Ontario Street and back over Lincoln Street through Sandpoint and out toward Schweitzer. From there, she cut across into Kootenai and went toward her last stop on Selle Road. The total distance turned out to be 28.85 miles — more than two miles farther than the standard 26.21 miles that constitutes a marathon.

Stansberry and Nigon completed the route in about 5.5 hours, with another hour added for interactions with students and snack breaks.

Along the way, Stansberry and Nigon were greeted with festive signs, cheering supporters and several students who ran along with the pair for up to two miles in some cases. At one point, the runners had accumulated more than half a dozen students jogging in their wake, picking up more students as others dropped behind.

At each stop, Stansberry took a moment to interact with students individually, reading a hand-selected verse to each student.

The gesture was well-received, said parent Jessica Shicker, whose son Deacon made special preparations for the event.

“It was sweet to see my son make sure he was well-rested and hydrated the night before the race,” Shicker said. “He asked a lot of questions regarding the distance, and was in disbelief as he grasped the concept of just how far 26 miles is, comparing it to the times he had run a mile or two around our block with his dad.”

Shicker said her son was so excited, it even convinced their 7-year-old sister – a first grader at Waldorf School – to join in the fun.

“The kids eagerly waited in the rain and cold, looking intently in the direction she’d appear,” Shicker said. “… When she did appear, they could barely contain their excitement, and my throat closed off as I swallowed a rush of gratitude at seeing someone offer such a grand gesture of love and honor to my child. … My kids came home with a sense that they had just participated in something much bigger than themselves, and with very full hearts and spirits.”

“I was very sweet,” Stansberry said. “Lots of students came and ran with me for short segments, or came out and said hello. Everyone was really excited. It was so fun to see everyone.”

As with other area educators, Stansberry said one of the hardest parts of the lockdown has been not seeing her students on a regular basis. She began teaching this particular class while they were in first grade, and the class will be entering fourth grade next season (Waldorf teachers stay with their classes from first grade until they graduate in sixth grade).

“As a teacher, you’re really energized by your students, seeing them learn and working with them every day,” she said. “This has been a challenge, because you don’t get as much of a sense of how they’re doing and you miss all the silly things they say and do, which is a big part of being a teacher. I’ve been with my students so long. They started as almost kindergartners and now they’re starting on the path of being really grown up.”

After the marathon-plus concluded in Selle Valley, Stansberry and Nigon arranged for a ride to pick them up and deliver them home so they could recover in style.

“We had made a lasagna and a bunch of Rice Krispie treats,” Stansberry said. “We lounged on the floor, stretched and ate lasagna, and I was really grateful for it. Parents had texted me pictures they had taken. It was so amazing to see how the community was there when I was out running. People were honking in their cars, some left baskets of snacks for me on their porches. It was so special to feel that support.”