Visitors to Davis Grocery & Mercantile in Hope are sure to notice a Frito Lay box and blanket tucked beneath a table, and a bowl of food by the door. Perhaps harder to miss, though, is the gray cat lounging on the steps, offering a gravelly meow of greeting to all who approach. 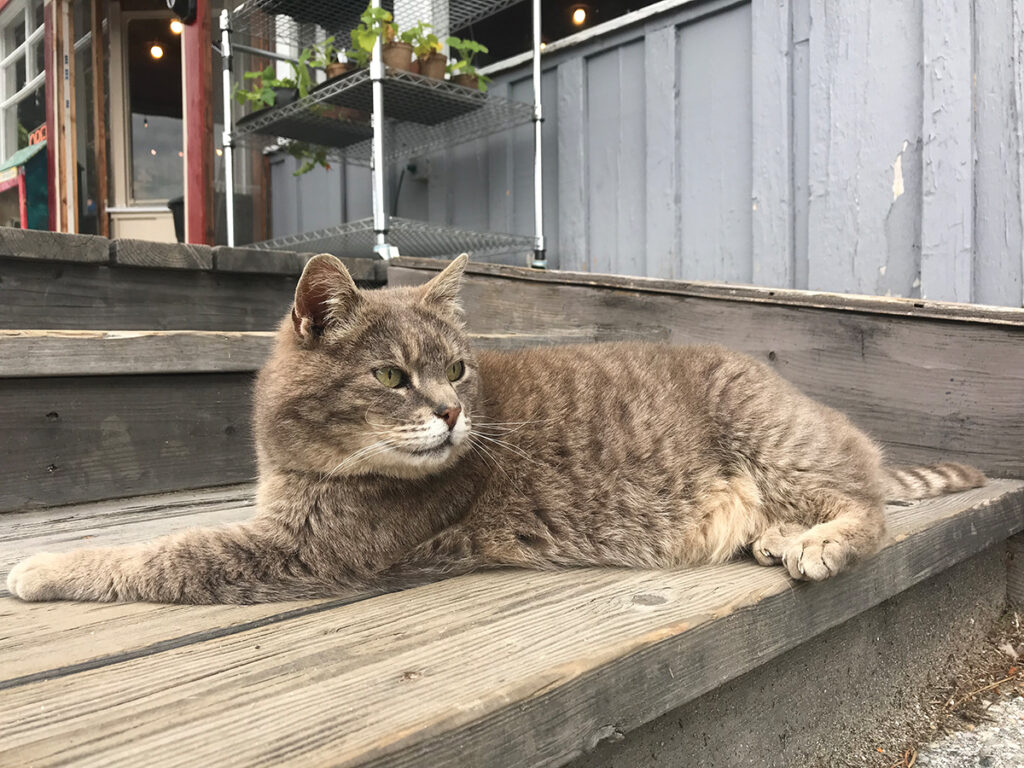 Wilder arrived at the market — then known as the Hope Marketplace — as a young stray. Kally Thurman, who owned the business at the time, said she tried to give him away twice, but to no avail — he came back to the market, clearly having found his home. Thurman and neighbor Vera Gadman began feeding him, then had him fixed.

Tentative estimates by both women place Wilder at more than 14 years old — surprising, as he remains agile and active around the property. Yet, for my 24-year-old self, it is impossible to remember the market without him.

Through the many iterations of the neighborhood — including the grand transition the market made in 2018 from the Hope Marketplace to Davis Grocery & Mercantile — Wilder has remained a constant. He spends most of his time on and around the building’s deck, and spends much of the winter beneath one of the cabins behind the market. Early attempts to bring him inside on particularly cold nights did not sit well with Wilder — he’s an outdoor kitty, through and through.

Thurman said he is a “fabulous hunter and gatherer — just doesn’t brag about it.” Currently, Wilder receives three meals a day thanks to a woman named Cheryl who lives near the market. Cheryl spends time with Wilder each day, and takes him to the veterinarian whenever it’s needed — a service that members of the Davis family, who now own the store, said they appreciate.

Beyond his relationships with people like Cheryl and others who frequent the market, Wilder is not the kind of cat to seek attention. He will accept affection on his own terms, but more often prefers peaceful, non-physical cohabitation on the deck. As Thurman summed it up: “He’s got rules.” 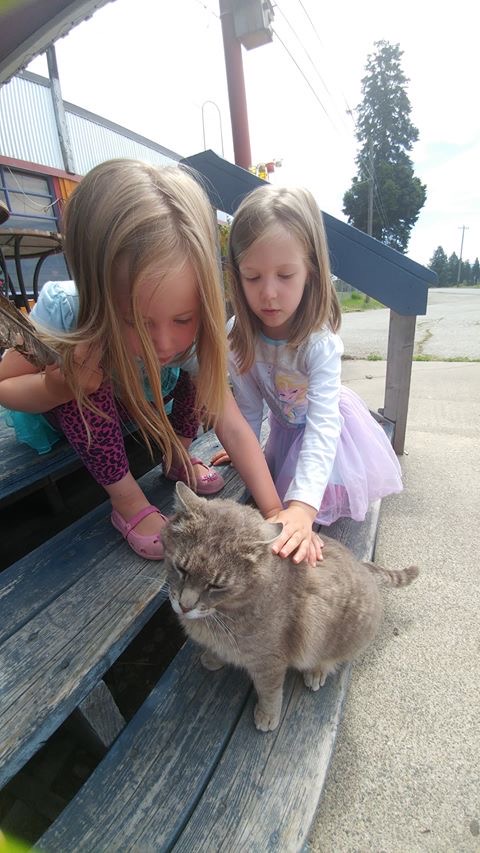 The Davis kids meet Wilder for the first time in 2016. The Davis family now operates the market. Photo by Jamie Davis.

Even I — decidedly a dog person — have an understanding with Wilder. I’ve spent a lot of time on the deck using the WiFi as of late, and Wilder is always nearby as I approach.

“Meow,” he replies, his voice — with its signature gritty undertone — coming across as begrudgingly hospitable. Still, he remains near me as I work — a solid and kind presence amid the busy foot traffic in and out of the market.

Wilder chooses his relationships carefully, but never communicates his distaste with hostile actions. If anything, he simply exits the deck with purpose — as if he has something more important to do. In all honesty, he probably does.

The Davis family met Wilder in June 2016 when they moved to town and took a walk to the post office. At the time, they had no clue they’d end up owning the market and simply stopped to love on the resident cat. Now, Wilder is often present as the Davis kids and their friends ride bikes around the store, ready to accept a quick ear scratch whenever it’s offered.

“He is such an important member of our crew,” said Jamie Davis. “He’s always there to greet customers and to be our store ‘caretaker.’ He really is a big piece of the charm of owning the store and has become part of the family.”

Davis Grocery Cafe Manager Cinnamon Miller said she’s had customers come in simply because they’ve heard about Wilder and want to meet him.

“My favorite thing about him is [when he meets] me at my car and walks me to the door — and if I’m late, boy does he let me know,” she said. “He is very much loved.”

While many people have taken ownership of Wilder over the years, forming relationships through food and the occasional cuddle, it is clear: No one person has truly adopted Wilder. In fact, it might be argued that he — more than anyone — owns the property. We are only visitors to his bustling abode.

“Wilder adopted the market,” Thurman said. “We just named him.”