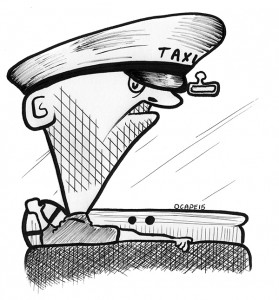 Let’s take a spin down the foggy, poorly lit path of memory lane to the day my father took off my training wheels of my bicycle. I remember being a bit nervous and jittery with anticipation at my chance to ride like a bonafide bipedaling adult human possessing the balance and grace to zip around on a mere two wheels. The wheels came off and off I went. It was a miracle. I took to it like a bird falling out of a nest, gliding off without effort, without a hitch, without a problem. That was it. I could ride a two-wheeled bike.

All in all, it was very anticlimactic. My father and I both were beaming with pride. But later I found out that it was really no miracle. The wizard in this fraudulent miracle of Oz ( my older sister)  eventually pulled back the curtain of my delusion, explaining that for months she had slowly been bending my training wheels upward over time, forcing me to wobble to and fro more and more for months until I eventually learned to balance between them. Apparently, I had been riding on two wheels for awhile. I hadn’t noticed this sabotage at the age of three.

The delusions of bicycling are tricky and insidious to say the least. Luckily for me the only injury I received due to my bicycle delusion was to my three-year-old ego. Fast forward to present time and I have witnessed numerous self-inflicted injuries by drunks trying to bike home from the bars under the delusion that they can navigate on two wheels, while they effectively have the mind of a three-year-old. We have been taxiing people from the ER in the early hours of the morning with sustained injuries (most commonly with split jaws) at an alarmingly increasing rate as we coast no-handed deeper into the summer. In addition to injury and potentially death, there are economic and legal benefits to choosing to take cab from the bar rather than the ER.

The list of injuries that one can attain whilst biking drunk are as vast and variable as Nicholas Cage’s acting style. Wait … I did that wrong. As vast and variable as the dubstep genre. Shoot, still wrong. OK, you can crash on a bike in as many ways as you can create memes off any given photo of a celebrity’s face. There we go, that’s it.

The most common accidents I’ve seen or heard of involve curbs, flip flop malfunction/entanglement, weaving, pavement, trees, stairs, falling off the Long Bridge, dodging cats, dodging raccoons, dodging people, dodging other drunk cyclists that are right beside you, looking down, looking up, looking at your phone, changing your music, loose shoelaces or pant legs and my personal favorite, double riding. I know it seems romantic and sexy to try and double ride someone home after the bar—trust me I’ve been there—but you know what isn’t sexy? Making out with bloody chins ( unless you’re a vampire than go for it, but in that case, you should have just flown home). You know what is sexy? Paying for someone’s safe romantic cab ride home with sultry tunes in the background. It also greatly reduces your chances of getting whacked by a car.

Which brings me to WAACD—Wise Adults Against Cycling Drunk. It’s in association with Mothers Against Drunk Driving, and it’s gaining momentum. Well … no, it’s not. But if anyone wants to get that group going, I’ve already made t-shirts and ribbons.

The economic benefits are really a no-brainer. What’s cheaper: a cab ride home or an ER visit? And that’s just if you’re lucky. How about an ER visit combined with taking time off work to heal, mixed with a dash of having your wages garnished for not paying your hospital bills served on a plate of having to buy a new bike? Or perhaps all of that, plus getting searched by the helpful police officer who came to check on you and having that illegal thing in your pocket discovered … yeah, you know what I’m talking about—that bootleg DVD you bought. Pirating is a serious crime. Come on, you would steal a car would you? Now that you’ve been searched, you’ve got jail time and court fees. Just call a cab: You’ll save money any way you look at it.

Legally, it’s pretty simple really. You can still get a DUI on a bike or be cited for drunkenness in public. Who knows, you might also throw in manslaughter for you double riders out there.

If you’re going to ride drunk though, which I and my associates at WAACD full-heartedly disagree with, make sure you’re set up properly. Tie your shoes or ditch your flops, cut off your pant legs so they don’t get caught in your chain, get a bell or a horn for corners or just yell real loud and most importantly, get a light. If you are in a pinch, you can grab a book of matches from the bar. Light them all at once and place them in your mouth and inflate your cheeks. This will create a red glow simulating a headlamp. Then ride like hell, because the fire is a-blazing and only last like four to six seconds.

I know this is a mountain resort town, and it’s cool to ride bikes. I get it—what’s not cool about carrying a bike helmet around the bar with one pant leg rolled up and mud on your back? Everyone’s gonna be like, “Dayuumn, that dude/dudette can ride a bike. I’d like to ring that bell, and put that in my basket.” I assure you though, once you’re bloodied, mangled, in jail and out of work, the only bell you’re going to hear ringing is that of your cell door for yard time. So call a cab, or, ya know, bust out those training wheels again. Ride on, right on, write on.