It is good to go away now and again, but magical, transporting experiences occur all the time here, even for those who have called Sandpoint home for decades.  Of course, that is repetition of the obvious.  Still, the obvious can elude. 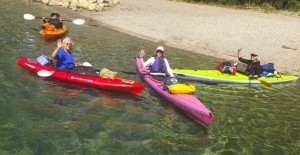 Embarking on a five-day kayak trip around the eastern side of Lake Pend Oreille are (from left to right): Rebecca Patchell of White Fish, Mont. (formerly of Sandpoint), Susan Drinkard, Joyce DeLaVergne, and Sandy Bessler, all of Sandpoint.

Sandy and I have had a goal to circumnavigate our lake’s shoreline in our kayaks for many years, but our jobs only allowed for this to be accomplished in a couple of legs. The summer before last we paddled from Buttonhook Bay at the southern end of the lake up the western side to Sandpoint. Last year’s thick smoke from the fires waylaid us, but this summer we agreed it was a priority.

We know the rhythm of the seasons here—how abbreviated is our summer. Heading toward or over the age of 60, all four of us feel the breeze on our backs of the proverbial winged chariot. Ugh.  The ties between Sandy, Becky, and I go back to the 1980s when Sandy’s husband, Chris, edited the Daily Bee and Becky and I worked there. I worked in Joyce’s classroom as an aide after the newspaper was regrettably sold to the Hagadone Corporation and Sandy and Joyce worked together for Green Thumb Landscaping even earlier. Becky moved to Whitefish, Mont., and winters in Tucson, and she and I have been friends for 33 years. Joyce and husband, Mark, are co-owners of Outdoor Experience. We all love to kayak.

So we had a one-hour planning meeting at the downtown Starbucks with Sandy’s waterproof map of the lake, Joyce’s thorough list of what to bring and me prefacing our planning by reading an applicable poem that feels like scripture:

“The Peace of Wild Things”

When despair for the world grows in me

and I wake in the night at the least sound

in fear of what my life and my children’s

I go and lie down where the wood drake

rests in his beauty on the water, and the

I come into the peace of wild things

who do not tax their lives with forethought

of grief. I come into the presence of still water.

And I feel above me the day-blind stars

waiting with their light. For a time

I rest in the grace of the world, and am free.

We wanted to feel the peace of wild things and to feel the liberation big water provides. Joyce and Sandy worked their arms diligently for a few weeks after a session with a personal trainer at SWAC.  I did some lifting at the gym, not as diligently, and Becky in Whitefish was taking a brand of yoga that requires the holding of poses forever. We felt strong enough. It wasn’t going to be a race, after all.

We left Farragut State Park at 11 a.m., Saturday, June 25—our boats so heavy with food and gear we could hardly carry them to the water, but as Joyce said, “but when you get it in the water, it is almost effortless.” Within the hour we saw a mama Rocky Mountain goat and her two babies high on a mountain so steep it looked as though they were stuck up there with Velcro.

We paddled to Whiskey Rock Campground, but with all ten sites taken, we had no choice but to paddle onward, to what we weren’t sure. We were so tired when we found a tiny, and I mean tiny “beach” a fisherman told us about, another mile north. It was crazy. We had to tie our boats to trees and squeeze our sleeping bags onto a tarp—no room for a tent. We had poison ivy at our heads and the lake at our feet. On a slight incline, we kept waking up to make sure our bags weren’t in the water while our heads were just inches away from the poisonous plants.

We averaged some eight miles per day, about two miles per hour.  We had no turbulent water and the wind was often at our backs (this is not always the case; this area is known for high winds and rugged water that have thrown many a kayak into the rocks).

We saw loons, chipmunks, mergansers, golden eagles, and the swallowtail butterflies were at every stop. We camped the second night on a small beach between Indian Point and Deadman Point along the Green Monarchs where the gigantic rock formations and pristine beaches are breathtaking—the only sign of previous campers being the campfire ring and heart rocks strategically placed on logs. Becky and Sandy put up tents. Joyce and I wanted the stars and the exposure and slept on mats all four nights, my clothes dangling from the trees and bushes around us; they were always in some state of wet.

We did not want to leave the serenity of the Green Monarchs. We had three- and four-hour periods with no boat of any kind in sight, perfect temps in the low 80s, calm wate, and down time to skinny dip and to eat and drink wine. At one point we sat facing the water and a blue heron flew by, seemingly in slow motion, right in front of us, leaving us rather drop jawed. The Green Monarchs are the real deal, so much so that I hesitantly write this for fear of even the slightest prospect of ruination.

We took enough food for four days, sharing it all. Becky brought avocados and carefully put them out in the sun at every stop to ripen them. She made delicious tea in the mornings and dinners of wraps of refried beans and avocados in tortillas warmed by her small stove. We shared yogurt, trail mix, apples, celery, granola, chocolate, oranges, banana chips, peeled boiled eggs soaked in Bragg’s, salami, crackers, all kinds of delicious cheeses, more chocolate, dried fruit and a Bota box of wine.

When both Sandy and I burned our hands, Becky wet some moss and it soothed and healed us quickly. Joyce, somewhat of a naturalist, kept us informed about the lake while Sandy’s expertise with her water filter kept us hydrated as she pumped lake water into bottles at many stops. We kept prolonging our stay at the Monarchs, stopping at many beaches, putting off the inevitable return to people and what ails us.

Finally we paddled to Beyond Hope Resort, where we had a campsite reservation on sweet, soft green grass. We were so tired, but resort employee Angelo moved all our gear from the water’s edge to our site in his golf cart. We were also profoundly hot and thirsty, and not for water or wine. We wanted beer.

Spotting the Canadian flag on the RV in the campsite, brave Sandy and Becky asked if we could buy some beer from them. A resounding “NO” was the response, but they said we could have as much as we wanted. They brought over six beers, a bag of ice and Becky gave them an avocado and some turkey jerky. They visited later in the evening and gave us their strong opinions about Trudeau and did some eye rolling about The Donald. The next morning they sat on a bench on the beach and waved goodbye, seeing us off.

We spent the fourth night on the end of the Sunnyside Peninsula near Hawkin’s Point at Billie and Mike’s Twin Cedars tipi.  With hot water, cots, an outdoor shower, and a Porta Potti, we felt spoiled. Check it out on Airbnb.com.

The last leg of the trip was long and hot. We stopped at Fisherman’s Island for lunch and swam at Kootenai Point. We paddled for hours to city beach, where we had a beer on the deck at Trinity, happy, but sad that we weren’t going back to the water to get into our kayaks again.

We had spent five days outside together, on ground, but mostly in the wilderness of water.

“The surprising thing about a kayak trip with three other women who are going to paddle 42 miles in four days was the ease at which good food appears and is shared… the days of open talking and freedom from the world of pressure to be someone or to speak a certain way, to look or dress like others… like the days of childhood passing the summer, laughing, head thrown back at the sky, and then we would come upon a sandy beach with lapping water and driftwood coves,” wrote Becky in an email.

As the poet wrote, “I come into the peace of wild things…and am free.”