It’s hard to overstate how important Nicolas Cage is to the cultural fabric of 21st-century America. He of the crazy eye, the absurd emotional outburst, simultaneously under- and over-stated, he’s like an alien — we never know when or whether to take him seriously, so when he puts on John Travolta’s face, morphs into a motorcycle-riding demon with a skull of flame or chainsaws his way to vengeance against psychotic cultists, we default to an anxious form of amusement. I swear he starred in National Treasure just so we have to say he’s a national treasure. If Nic Cage did not exist, we would have to create him.

Cage pulls so much weight in the filmmaking world that when he’s in a movie we tend to shorthand describe the project as a “Nicolas Cage movie,” regardless of whether he actually had a hand in the writing, directing or producing of it. In the case of the 2021 surprise masterpiece Pig, he co-produced with writer-director Michael Sarnoski, meaning his bizarre fingerprints are all over it — and it shows.

Critics have frequently likened Pig to the Keanu Reeves-fueled John Wick series, but with — as the title suggests — a pig. On the surface this is apt. 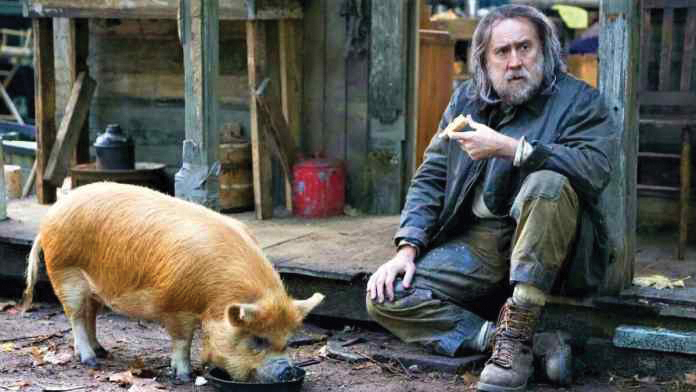 In Pig, Cage plays Rob, a former rockstar chef in Portland, Ore.’s foodie scene who has retreated to the drippy forests of the Pacific Northwest with only his prized truffle-hunting pig for company. Rob and his pig spend long, contemplative days hunting up mushrooms and cooking haute cuisine in a rustic log cabin. They see no other humans, except for a restaurant buyer bro who rolls up in his bright yellow sports car to buy truffles that he then sells to hotshot eateries in the city.

This is a peaceful, fulfilling existence until a couple of tweakers barge in, beat Rob silly and steal the pig, ostensibly so someone else can take advantage of her mushroom sniffer. As with John Wick (in which our hero unloads unholy vengeance on a bunch of dog-nappers), Rob must leave his self-imposed hermitage to save his pig — in the process, journeying into the dark underbelly of Portland’s high-end kitchens.

There the John Wick similarities end. Whereas Reeves kicks ass, Cage gets his ass kicked more often than not. There’s a weariness to his quest; he spends the whole movie in a bloodied pair of long johns, his stringy hair, unkempt beard and battered face worn like badges of authenticity amid the affectations of all those city-dwelling gastronomes. But he doesn’t beat on them with his fists, rather, it’s his barbed tongue and knowing gaze that pack the punch.

Pig is not an action movie in the typical sense. Cage, true to form, subverts expectations by playing Rob with sad-eyed wisdom. He’s like a fallen king, still possessed of the qualities that made him great, but mouldering in noble decline — his talents and soul reserved only for himself.

That said, co-star Alex Wolff deserves at least half the credit for Pig’s charm. Wolff plays the truffle buyer Amir. Superficially, Amir is a caricature of Gen-Z’s neurotic drive for wealth and self-actualization. However, Wolff embodies Amir’s thwarted striving with such wounded sincerity and self-consciousness (even as it’s insufferable), that it’s all a sensitive viewer can do to keep from wanting to give him a hug. Paired with Cage’s crusty Rob, Wolff’s Amir is the character who provides real definition to both roles. More than that, Amir is the keystone to unraveling not only the mystery of who took the pig and why, but opening the whole world into which she disappeared.

Rent it on Amazon.