Rosedale: ‘Our elections are secure’

In face of fraud allegations, Bonner County will take part in state audit of 2020 election results on Oct. 2

Bonner County Clerk Mike Rosedale is speaking out about allegations of fraud against Idaho and its counties in the 2020 presidential election, publicly denouncing claims to that effect by My Pillow CEO and now-famous conservative activist Mike Lindell and announcing Bonner County’s upcoming participation in a state-run audit of the election results.

In a Sept. 21 media release titled “Election Integrity in Bonner County,” Rosedale wrote that he “generally” agrees with Lindell’s belief that “there was massive election night fraud in at least six states” during the 2020 presidential election. To date, claims of widespread election fraud remain unsubstantiated, with a highly-anticipated, Republican-run audit of Arizona’s Maricopa County reaffirming Biden’s win on Sept. 24.

Despite his broader concerns about the integrity of the 2020 presidential election, Rosedale isn’t mincing words about Lindell’s claims of election fraud in Idaho and, more specifically, Bonner County.

“This is disgusting,” Rosedale said, referring to suggestions of impropriety in Idaho elections. “Reputations take a long time to be built and can be destroyed in a moment by the likes of what we see here.”

Rosedale recently obtained a document from a “wonderfully vigilant individual who had attended a Mike Lindell training,” he said. That document offered supposed evidence of how, exactly, elections systems were tampered with to swing the election in Biden’s favor, with Bonner County seeing a supposed 2,244-vote swing toward Biden. According to official Bonner County election results, Trump won with 18,369 votes to Biden’s 8,310.

Rosedale shared in his media release that Lindell’s claims have no basis in fact. While Lindell offers IP addresses through which Idaho election equipment was hacked, Rosedale said the state’s systems are actually not connected to the internet in any way.

“There is no connection to the outside world at all with our scanners or tabulators. No Wi-Fi. No Bluetooth. No cable. Nothing,” Rosedale stated. “In fact, to print any results I have to use a special key fob and a proprietary thumb drive to transfer the information from our scanners to our counter.”

Dates on Lindell’s material showing when, exactly, vote tampering occurred also don’t check out, according to Rosedale, since Idaho elections officials had their data uploaded to the secretary of state well before listed dates like Nov. 5 or Nov. 6.

“What this means is that somebody just assigned a magic vote fraud number to all Idaho counties,” Rosedale wrote. 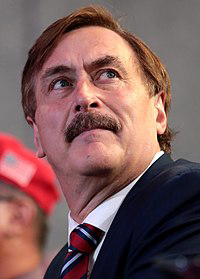 That “magic vote fraud number” appears to be a formula uncovered by Chief Deputy of the Secretary of State Chad Houck, which Rosedale said also worked when applied to fraud allegations in other counties in Alabama, New York and Utah, demonstrating a pattern in Lindell’s claims.

“Lastly, what is really infuriating is that nobody from the Lindell group ever called Bonner County Elections to even find out what type of equipment we use, that we weren’t connected to the internet, our processes, how we communicated with the SOS. Nothing,” Rosedale shared. “No verification or validation of claims. So for the sake of apparently trying to make a big splash, he tarnished the reputations of possibly thousands of counties across the USA. Smooth move, Mr. Lindell.”

Lindell did not respond to a request for comment before press time.

Rosedale is using the claims as an opportunity to assure his constituents that local elections are in good hands.

“My goal here is to let Bonner County citizens know that our elections are secure,” Rosedale told the Reader in an interview following the media release, adding later: “We pain ourselves to get it exactly right.”

In an effort to live up to their word, Bonner County elections staff members will take part in an audit by the Idaho secretary of state’s office on Saturday, Oct. 2 at the Bonner County Administration Building. State elections officials will randomly select several precincts, then hand count paper ballots in an effort to compare results with Bonner County’s official canvas of the November 2020 election.

Rosedale said that five of his staff, five SOS staff, five Republicans and five Democrats will take part in the counting. While seating is limited and members of the public can’t get too close to the ballots as they’re being counted, the audit is meant to be a public display of Bonner County’s election integrity.

“This isn’t a red vs. blue issue. This is a stand for the truth,” Rosedale wrote in his media release regarding Lindell’s claims of fraud in Idaho. “In this office I make sure that each and every red and each and every blue vote counts. Period. All of you who have been so gracious to help elections from both sides of the aisle know this is true and know how hard my elections staff work to make sure of this. Love it or hate it, what Bonner County elections results show are what happened for real.”