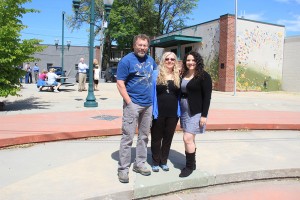 The project, which is funded through a $48,734 Idaho Gem State grant, a $10,000 Sandpoint Urban Renewal Agency contribution and $1,266 in city grant matching funds, will take up 150 square feet in Jeff Jones Town Square. Comprised of 30 hexagonal panels at a cost of $2,000 per panel, the project will be a pioneering effort for Solar Roadways technology. Given the viral fame the company has achieved, the demonstration has garnered worldwide attention.

According to Stapleton, the project should be completed by late August to early September. With council approval secured, Solar Roadways staff will begin ordering parts and assembling the panels. From there, they’ll install the panels and tie them in to the electrical grid. The panels will include 56 clusters of six LED lights, which can be programmed to display a variety of messages, pictures or designs.

“From where they are as a company in terms of development, this will be an important project for them,” Stapleton said.

With Solar Roadways technology nearly ready for its public debut, the company is fielding interest from Missouri, the University of Idaho, Boise State University and dozens of other cities, companies and schools.