“Atheist and Leveler from Virginia”

As we celebrate Thomas Jefferson’s 273rd birthday next week, we need to be reminded about what a controversial figure he was.  In the election of 1800 he was called “that atheist and leveler from Virginia.”

Alexander Hamilton was so committed to preventing “an atheist in religion and a fanatic in politics from getting possession of the helm of state” that he urged New York governor John Jay to block Jefferson’s election.

During the 1800 election campaign, rumors were spread that, if elected president, Jefferson would confiscate all the Bibles in the land and replace them with his own version, one in which all references to miracles and the Resurrection were deleted. Jefferson was confident that the early Church had added supernatural events to his life and teachings. 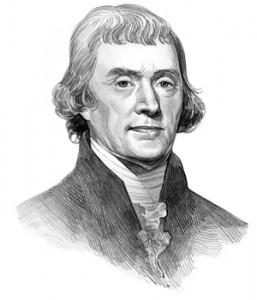 Jefferson believed the propagation of religious dogma was the cause of much evil in the world, and he was convinced that reason alone could guide the moral life.  In a 1787 letter Jefferson had this piece of advice for his nephew Peter Carr: “Fix reason firmly in her seat, and call to her tribunal every fact, every opinion. Question with boldness even the existence of God.”

Some conservatives have called on Jefferson’s authority to criticize the Obama administration.  They promote the phrase “God-given” rights from our founders assuming that the reference is to the God of the Bible.

When Jefferson referred to “Laws of Nature and Nature’s God” in the Declaration of Independence, he was not referring to a deity who intervenes in history and hardens the hearts of world leaders.  (So much for their rights and freedom!) Rights are inalienable only if they are guaranteed by the immutable laws found in human nature, immune from divine veto.

Jefferson was convinced that the English Common Law he studied in law school was by far the best reflection of this natural law.  That would mean, for example, that Jefferson would have, if abortion had been an issue in his day, supported 18th Century jurist William Blackstone’s position that the human fetus was not a person until the third trimester.

These conservatives use the phrase “God-given rights” to promote an American exceptionalism.  The implication is that by having God on our side, we can defeat Europe’s “secular socialism” and continue the unfettered capitalism that has nearly destroyed the world’s economy.

I sometimes call myself a classical liberal. I define that position in terms of the motto of the French Revolution, which I revise as “liberty, equality, and community.”  The American Revolution was far less violent than the French Revolution, primarily because our founders realized the importance of the traditional values embedded in our diverse communities.

Jefferson was called a radical in politics and a “leveler” because of his sympathy for the French Revolution.  Dictionary.com defines “leveler” as “one who would remove social inequalities or distinctions; a socialist.”

But of course Jefferson was no more a socialist than Obama is, but both of them are classical liberals because, while holding traditional values dear, they believed that equality was just as important as liberty.

One aspect of Jefferson’s views is actually way out of line with classical liberal philosophy, based as it is on international free markets.  Jefferson’s ideal America was a nation of small farmers living virtuously on the fruits of their own labor.  True Americans would avoid manufacturing, a market economy, and wage labor, which he thought was degrading to the human soul.

Jefferson disliked the Federalists partly because they “all lived in cities,” but Federalists such as Alexander Hamilton encouraged manufacture, banking, and the wise management of debt. Had it not been for Hamilton’s successful plan to nationalized the Revolutionary War debt and build up the nation’s credit in the world economy, President Jefferson would not have been able to purchase the Louisiana Territory from France.

Republicans praises a man with an odd and anachronistic view of the American economy, so we should commend both Hamilton and Obama for realizing that government and private interests must always work together in truly successful human societies.

Nick Gier taught philosophy and religion at the University of Idaho for 31 years.