Coming off a winter season that left local lovers frustrated and sad, the last thing residents want is more of the same. But if climate predictions hold true, that might just be what we’ll get.

Many climate experts are predicting an El Niño of historic proportions this winter season. The warm sweep of wind over the next several months will affect different parts of the country in dramatically different ways, scientists said, but for the Northern Rockies region, they expect unusually warm and dry weather. 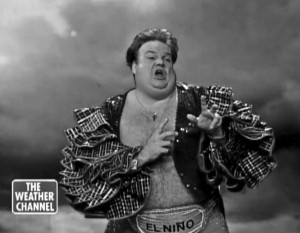 “Nearly all of the credible models we have for seasonal climate prediction are calling for a warm and dry winter across the region,” said John Abatzoglou, a climate scientist and professor at the University of Idaho.

That model is backed by plenty of data across decades, he added. El Niño winters typically bring few days of winter precipitation and decrease the size of the biggest snowfall events.

“All of the decent El Niños over the past 50-60 years have resulted in below normal April 1 snow water equivalent for northern Idaho,” Abatzoglou said. “The two strongest El Niños on record in the winter of 1982-83 and 1997-98 actually brought close to normal precipitation for the state of Idaho, but above normal temperatures that allow less precipitation to fall as snow and hasten the rate of snowmelt.”

Considering the low-precipitation winter and a dry summer to match, that’s a discouraging prediction on several fronts. After the devastation of this summer’s wildfire season, no one is eager for a repeat. According to Abatzoglou, only time will tell how next year’s wildfires will hash out, as they’re largely dependent on next summer’s precipitation and temperature.

“That said, starting off the spring with a wimpy snowpack doesn’t help the matter,” he added.

The Flathead Beacon, meanwhile, reports that Northwest Montana farmers are bracing for what could be difficult year, especially since the region already suffers from drought. 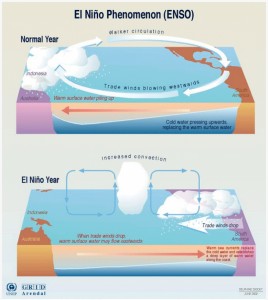 The El Niño Phenomenon explained. During a normal year, equatorial winds gather warm water and pool it toward the west, creating cold water off the coast of South America. During an El Niño year, easterly winds weaken and warm water moves to the eastward, creating the potential for a warmer winter in North America. Diagram courtesy of ENSO.

“The old saying is, ‘Seed in the dust, your bins will bust.’ Well, we’re seeding in the dust,” Tryg Koch, co-owner of Heritage Custom Farming, told the Beacon. “We have no choice but to keep a positive attitude We’re totally relying on Mother Nature. It is what it is. I’m not going to say I don’t lose sleep some nights though.”

Schweitzer Mountain Resort maintains a similar willingness to roll with nature’s punches. Marketing manager said no matter what may come, the staff is committed to providing a great season for its guests. To that end, they have their snow machines ready to deploy should the weather prove stingy.

“We can sit here and worry, but it’s all down to Mother Nature,” Chrismer said.

Indeed, when the resort staff receive conflicting reports on a regular basis, Chrismer it’s best not to obsess over the details and simply focus on the job at hand.

“The Farmer’s Almanac will say one thing, and another publication will say another,” she added.

That’s probably a smart approach. Even with strong evidence predicting a warm and dry season, there’s no definitive answer as to what this winter’s snow will look like,  Abatzoglou said.

“Collectively, this forecast increases the odds, but doesn’t guarantee, a poor snow year in the region,” he said. “The impacts of El Niño tend to be a bit stronger during the latter half of winter, so hopefully a few solid snowfall events can deliver the goods to ski resorts ahead of peak visitation.”