Friday brought Medicaid expansion one step closer to Idaho’s November ballot, as volunteers gathered from across the state at the Capitol in Boise to submit more than 70,000 verified voter signatures in favor of closing the “health coverage gap.” 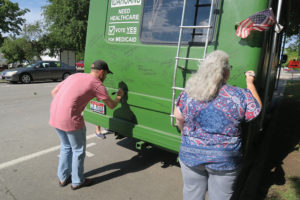 A couple Sandpoint residents sign the Reclaim Idaho RV before it left for Boise on Thursday morning. Photo by Ben Olson.

“The ballot measure would provide a healthcare solution for thousands of single parents, near retirees, rural residents and all hard-working Idahoans who earn too much to qualify for Medicaid and too little to afford coverage on the state’s health insurance exchange,” said Idahoans for Healthcare in a statement Friday. The group is a coalition of healthcare providers, business leaders, community organizations and grassroots activists looking to expand Medicaid in Idaho.

Strizich and her husband, Garrett, as well as Luke Mayville, are the leading voices behind Reclaim Idaho, the grassroots campaign that led the charge for signatures over the last year. Garrett and Mayville hail from Sandpoint, where they made a stop Thursday to speak with locals about the ballot initiative. 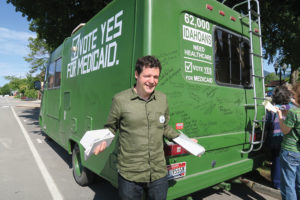 Luke Mayville getting ready to pass out materials before hitting the road for Boise Thursday morning. Photo by Ben Olson.

“We’ve got a lot of work to do to earn Idahoans’ votes, but there’s a lot of excitement around this very popular initiative,” Strizich said, noting the months ahead will be all about voter outreach. “This is one of those common-sense solutions that people across the political spectrum can get behind.”