How to co-exist safely on Lake Pend Oreille

Boaters, swimmers, paddlers and shoreline landowners are all using the county’s waters to their fullest potential this summer, and while there may be enough water to go around, there’s often an issue of both respect and safety as the summer reaches its apex of recreational use.

With the help of some local officials who also sit on the Waterways Advisory Board, the following are a few reminders in safety and courtesy when using the area’s waterways. 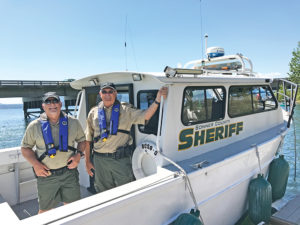 Lake safety is based largely around the coexistence of multiple lake users, including boaters, swimmers, those on paddlecraft and more. Lieutenant Ed Jochum, head of the Marine Division of the Bonner County Sheriff’s Department, said he has observed collisions of these different users all over the county’s waterways firsthand.

“Kids swimming in the launch areas, especially at (the Hope) boat basin, is an issue,” Jochum said. “The other day I had a kid swim right behind the boat while I was backing up.”

“Boaters have the right of way. The facilities are paid for with boater dollars,” he said, citing both the gas tax and boat registration fees.

“That issue is inherent at every boat launch. You see it at Garfield Bay, you see it everywhere,” said Steve Klatt, director of the Bonner County Waterways and Parks Department. “The docks they walk on are boat docks — it’s just a problem. Kids will go to the water frequently unsupervised.”

Due to these unsafe interactions, Klatt said his department is looking to create a designated swimming area at the Hope boat basin. The area would include a float dock specifically for swimmers, as well as a shore dock.

“I would like to see it in place next summer,” Klatt said.

Personal flotation devices (more casually referred to as life jackets) are required to be worn by children under 14 on boats 19 feet or smaller at all times, and jackets must always be within easy reach for adults riding on watercraft both motor-powered and not. Life jackets must say “Coast Guard Approved” on the label to be considered legally valid.

“Personal flotation devices are just something that is so frequently overlooked,” Klatt said, adding life jackets are just as important for people on paddlecraft as they are for people in high-powered boats. “We have so many kayakers, paddleboarders, paddlecraft people who absolutely have no boating experience of any kind and they’re recreating with no regard to visibility, particularly when it gets to be dusk and just not understanding that they are risking their own safety by having no regard to where they’re recreating.”

The importance of PFDs is only emphasized by the fact that three people died on Lake Pend Oreille over the July Fourth weekend — all three were not wearing life jackets.

To combat this, Idaho Parks and Rec with the help of Coast Guard funding provides a PFD kiosk at each prominent boat ramp in the county.

“I was at (the Hope) boat basin last week and there were about six left and they were all thrown on the ground, but they were all soaking wet, so kids are using them,” Jochum said.

To make sure people are abiding by PFD laws, marine officials make it a point to check that the adequate amount of life jackets are on board while doing routine safety checks both on the water and at boat ramps.

Be aware of drift

Due to a breach in the lake’s shear boom system this spring, the amount of driftwood around the lake is far higher this year than in years past, Klatt said.

“I think that this year regarding boat safety people really need to be cognizant, particularly at dusk, of big debris in the water,” he said. “From a county liability standpoint, we can’t move debris — we have nowhere to put debris. If we interfere with this natural course and tow it somewhere and something happens, we have liability.”

When those from the marine division patrolling the lake discover debris, Jochum said the areas are flagged so they’re visible from a distance.

“Normally, where the debris is found, it is virtually all on private land. We just mark them,” Jochum said. “They tend to clear themselves out of the (lake) system over time.”

Due to increased complaints regarding excessive wake from shoreline homeowners over the past several summers, Jochum said his department is cracking down. The general guideline is that there should be no wake “within 200 feet from any shoreline, dock, pier, bridges, other structure or any person in the water,” according to the BCSO’s website.

“We from the marine division are basically taking a no-tolerance stance. We’ve written eight to ten citations already,” Jochum said.

The issue also has environmental implications when it comes to erosion, so Lake Commission coordinator Molly McCahon said she is working with a subcommittee of the Waterways Advisory Board to push the narrative “avoid the shore, ride the core,” meant to encourage boaters to stay as far from the shore as possible.

The county has invested in three portable buoys that Jochum said they’ll be moving around into problem areas to alert the public to what 200 feet is. On top of that, Jochum said they’ll be doing “emphasis patrols” — sitting on private docks that have reported wake problems and issuing citations. These patrols will begin in the coming weeks.

“Our point with ‘avoid the shore, ride the core’ is not really to emphasize the 200-foot wake zone, because there are many boats out there that that distance isn’t really adequate,” McCahon said, noting that modern wake boats are meant to create excessive wake for recreating purposes. “We really just want to encourage people to stay as far away (from the shore) as they can. We want to avoid creating any more regulations — we just hope people can be self-regulating.”

Damaging wake isn’t the only issue landowners are concerned about when they call the sheriff’s office, Jochum said.

“We’re getting complaints about audio noise and excessive engine noise, and we’re targeting that, also,” Jochum said. “I’m surmising it might be because those new wake boats have those huge speaker systems on them. You didn’t see that 10 years ago — they’re 12-inch speakers, and they really pump it out.”

In addition, Jochum said certain exhaust systems, specifically those mounted above water, are illegal in the state of Idaho.

Ultimately, Jochum said noise — and most other lake safety issues — comes down to sharing the waterways in a respectful manner.

“Be respectful of homeowners, and other boaters, in the area,” he said.