I am passionate about medical research — especially about the brain. If you think that’s largely because I have a chronic and progressive neurological condition (Parkinson’s disease), you would be correct.  There may be other reasons as well. Knowing that the universe operates in mysterious ways, I wonder if there is any connection to my 13-year-old self who saved his money from mowing lawns, so he could buy a high-quality microscope and peer into the magic and mystery of the unknown? 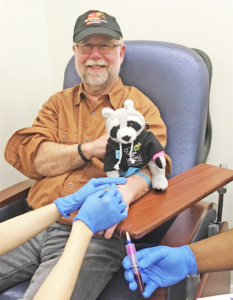 The author has his blood drawn with a little help from “Parky,” the official mascot for the World Parkinson Congress. Courtesy photo.

That makes my adventures last week almost perfect. I was asked to participate in a grant review process for the Parkinson’s Foundation. Prior to our meeting, each of us spent 20 or more hours studying the research proposals–reading, trying to understand the “big words” (like mesenchymal), evaluating and scoring. These research proposals were from “post-doc’s” scattered across the country at various elite universities and research centers. A post-doc is just that — a person who has recently finished a Ph.D and is looking to strike out on their own (with the help of a mentor), complete a research project, get published and get more funding so the cycle can repeat. Unfortunately, in the big scheme of things, less than 25 percent of proposals ever get funded.

How does the process work? In this case, two PWPs (people with Parkinson’s) and 10 scientists sat around a large conference table in an office about a block from the Empire State Building to discuss the merits of the finalists to determine who gets funding. The PWPs may not comprehend all the hardcore science (although we do know that LRRK2 is the leucine-rich repeat kinase 2 gene that has over 20 mutations that may cause or contribute to PD), we do know how PD affects quality of life. We provided valuable input by helping put a human face on the research. Together, we decided how to distribute most of a million dollars!

Since I was flying to New York, anyway, I checked in with my favorite world-class PD researcher: David Sulzer. Dave is not only the smartest guy I know, he runs a lab at Columbia University doing some of the most exciting work in the PD arena. Luckily, he had time to have lunch and to carry on a conversation about a variety of topics: the politics of academia, the art of getting published, what it takes to get funded, the National Institute of Health (NIH), mitochondria, autophagy and more. Even though I only understood about half of his scientific musings, it was an incredible opportunity to learn (what I could) from a genius. Not only that, I got a private tour of the various lab stations and ongoing research projects. The highlight of the tour was seeing images from a $250,000 microscope. Is that cool or what?

Another reason for my visit to Columbia University was to participate in a research project. One of my least favorite activities is donating blood. So, of course, this study involved a blood draw — a lot of blood. The plan was to collect 22 of those little test tubes full. The purpose, as I understand it, is to get enough blood to isolate T cells that cause inflammation in the brain and may kill neurons involved in Parkinson’s. In blood, T cells are very rare, which is why they needed so much. T cells are also known as killer cells and are supposed to recognize invaders and—get ready for an official medical term—zap them. Unfortunately, they can sometimes misidentify your own brain cells and zap them. In a nutshell, this research is investigating PD as an auto-immune disease. The possibilities are exciting! Could this lead to better treatments? Could it slow or halt the progression of PD?  Could it result in a cure? With those potentials on the table, I was willing to do my part and give them my blood.

Sadly, I apparently have lousy veins — after five needle sticks, my veins decided it was enough and shut down. I was only able to fill a few of the test tubes. Better than nothing, but still disappointing. Was it worthwhile? Absolutely. Imagine. My blood may help move us closer to a cure.

When I share my thoughts on participating in PD research, I frequently quote Rabbi Hillel the Elder from over 2,000 years ago. Loosely translated, he said: If not us, who? If not now, when? Thus, I was feeling smug and self-satisfied for doing some good deeds. Mother Nature stepped in to knock me down a peg or two in an effort to keep me humble. Due to weather in Minneapolis, the airport shut down and my eight-hour return trip turned into a nightmarish 32-hour odyssey that included a frenetic cab ride from LaGuardia to Kennedy Airport, sleeping on the floor of the terminal and spilling a hot cup of coffee on myself. Karma? Maybe so. But, I did get a free upgrade to first class between New York and Seattle.