Series of local vigils planned for peace in Ukraine

Between 30 and 35 area residents gathered April 10 along Highway 2 for a peace vigil centered on the conflict in Ukraine, which Russian troops triggered in February with an unprovoked invasion.

Organized by Sandpoint High School sophomore Grace Rookey, with help from the Bonner County Human Rights Task Force, the gatherings have been ongoing since early March. 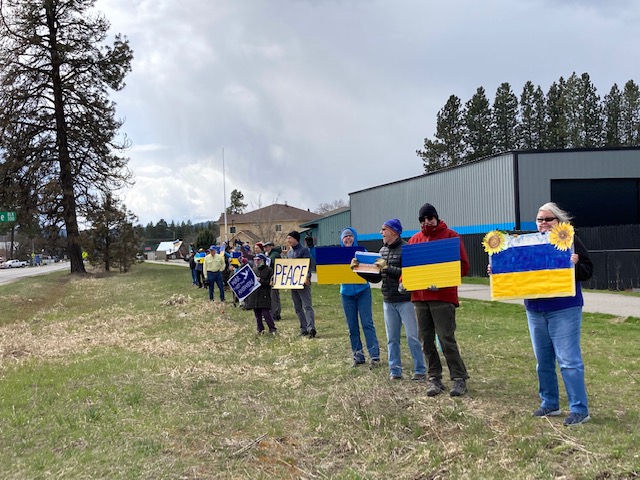 From its initial assault, Russian military forces have engaged in an escalating campaign of violence and terror focused on a broad range of civilian targets. In a report on conditions in Ukraine released April 13, observers with the Organization for Security and Cooperation in Europe found “clear patterns of IHL [international humanitarian law] violations by the Russian forces.”

The team of human rights experts, composed of legal scholars from Austria, the Czech Republic and Switzerland, was directed by 45 of the 57 member states in the OSCE to investigate possible war crimes committed by Russia in Ukraine. In particular, the report highlighted Russian attacks on a hospital and theater in Mariupol as war crimes.

While the observers also found evidence of humanitarian law violations by Ukrainian fighters — particularly against prisoners of war — the report made clear that not all violations of IHL rise to the level of “war crimes.”

Regardless, the totality of Russia’s transgressions amounted to a “catalog of inhumanity,” according to Michael Carpenter, U.S. ambassador to the OSCE.

Information gathered by the mission is to be forwarded to international tribunals, according to Reuters, which noted that Russia’s representatives to the OSCE condemned the report as “propaganda.”

According to BCHRTF Co-President Linda Navarre, the peace vigils have included SHS students, members of the Quaker and Presbyterian faith communities, and BCHRTF attendees. Plans are to continue similar gatherings at the same location from 1-2 p.m. every Sunday “for the foreseeable future.”

“Lots of honks and thumbs up,” Navarre told the Reader in an email.