The city of Sandpoint approved the Selkirks-Pend Oreille Transportation bus system, better known as SPOT, for another year of funding Wednesday. 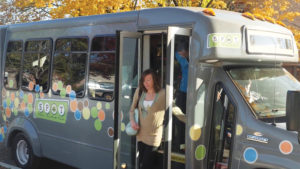 The bus system, which is preparing for one of its busy seasons marked by the opening of Schweitzer Mountain Resort, will keep rolling on $78,000 from the city, in addition to revenue from other cities and sources. The request was an increase by $8,000 from last year, and according to Clifton Warren, treasurer of the Selkirks Pend Oreille Transit Authority, that’s to establish budget parity with the city of Ponderay, which paid $78,000 last year.

According to Warren, SPOT has grown substantially from its humble beginnings seven years ago. The service now operates seven vehicles in its fleet, and that number will soon be expanded. It also kicked off special event service, transporting people to high-profile attractions like the Festival At Sandpoint. That service offered 2,800 rides this year, an impressive figure for its first year, Warren said. It also took an estimated 100 potential cars per night out of the residential areas surrounding the Festival, which Warren said played a significant role in reducing congestion.

“It was convenient, and we got nothing but good feedback from the riders,” he added. “They loved it.

SPOT also recently added Boundary County to its list of community partners, offering three days of demand-response service in Boundary County and two days of service from Bonners Ferry to Sandpoint, a useful service for seniors making their doctors appointments and shopping trips.

Also new is a van pool program, with one van coming up from Coeur d’Alene to Quest, which employs many people from the area. Warren said SPOT officials hope to expand that service in the future.

In the near future, Warren said SPOT will likely take over bus service from the Schweitzer Red Barn to Schweitzer Village. Officials received quotes this week for the buses, which should be delivered in time to start service this year.

If grant opportunities come through, expanded winter service to Bonners Ferry could bring additional skiers and snowboarders down to the mountain, Warren added.

Another opportunity is to establish a SPOT route linking to a Greyhound service, which would connect Sandpoint and Bonners Ferry to Coeur d’Alene. From there, riders could connect to buses heading toward Spokane and the airport.

SPOT’s staff consists of one full-time manager, a part-time dispatcher and 14 drivers. Indeed, a lack of drivers are one of the primary challenges facing the system, and another full-time office position is sorely needed, Warren said. Other challenges include aging buses, which Warren said are being pushed to the limit of allowable mileage. However, officials are already pursuing funding to replace fleet vehicles as needed.