Recent news that BNSF plans to move forward with a second railroad bridge over Lake Pend Oreille has sparked a lot of conversation. The proposal, initially floated in 2014, is back and could be here to stay. 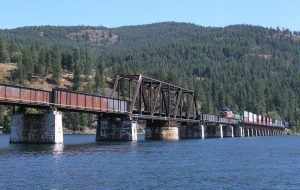 The current rail bridge experiences 50-60 trains per day, with traffic swelling up to 70 trains per day during the peak traffic season. BNSF rationalizes that a second bridge will help alleviate long wait times at blocked crossings.  Yet, shorter wait times could very well be offset by an increased number of trains facilitated by the addition of another bridge.  BNSF’s assurance of smoother flowing rail traffic sounds promising. However, their proposal, which could theoretically double the number of trains passing through Sandpoint and the region, also carries with it unintended impacts on daily life and an increased risk of potentially devastating accidents.

The recent derailments of two trains in Bonner County exemplify the risks to public safety and the environment that adding another bridge could exacerbate. Although the coal train that derailed in Ponderay was empty and the train that derailed in Cocolalla was carrying corn, these trains could just as easily been carrying hazardous materials like volatile Bakken crude oil, anhydrous ammonia, or liquefied chlorine gas.  A derailment of trains carrying any of these materials near our rail-side communities could threaten lives.  Moreover, a derailment of this sort along the shores of Lake Pend Oreille or over it would have devastating impacts on the quality of our drinking water, recreation and wildlife habitat.

Loss of these critical resources and amenities along with increased safety concerns would threaten the resiliency of our local economy, which relies in part on tourism, and our region’s ability to recruit new businesses to the area.

While the construction of a second bridge does not guarantee any of these outcomes, the added infrastructure is likely to increase the probability.  Whether our rail-side communities want to assume the added risk is a question that should be vetted through a robust public debate and comment process, but BNSF may qualify for certain permits that would not require public input.

The construction of a second bridge, as proposed by BNSF, will require permitting from the United States Army Corps of Engineers (USACE), among other permits.  In some cases, necessary permits from the USACE can be obtained through a general permitting process that does not require public comment.  However, the USACE has discretionary authority to require an individual permitting process that mandates public comment when a proposed project has the potential to result in significant impacts on the public and the environment.

A proposal of this scale should have the benefit of the local communities’ opinions and concerns.  The best way to ensure the public can weigh in on this proposal is to request that the USACE require BNSF to apply for an individual permit that mandates a public comment period.  Requests to the USACE can be directed to:

If you believe that ensuring the integrity of our current rail infrastructure, including tracks and the existing bridge, should take precedent over creating new infrastructure that could result in additional accidents, threats to water quality and overall quality of life, please take the time to contact the USACE.

Shannon Williamson is the executive director of Lake Pend Oreille Waterkeeper and a Sandpoint city councilperson. Matt Nykiel is a conversation associate with Idaho Conservation League.