This Saturday, five Bonner County women will be honored for their community service and leadership with the cherished “Women of Wisdom” award bringing to 100 the total of women so honored in the program’s 18 years.

The recipients to be honored on May 13 are: Patti Clemons, Janel Holm, Donna Hutter, Myra Lewis and Georgia Simmons. They were selected by the 22-member Women Honoring Women (WHW) committee “from many nominations, which is no easy task,” says committee member Kathy Chambers. 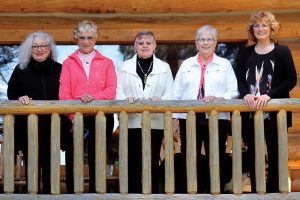 WOW selection calls for “a candidate to be 65 years or older, demonstrate vision, collaboration, leadership, grace, courage, integrity and a love of learning through the pursuit of knowledge. She shows a commitment to and has had a positive impact on the Bonner County community. She is an inspiration to others and an example for future generations of women.”

“Women of Wisdom” was the creation of Marsha Ogilvie in 1999 “who realized there were so many outstanding women, unnoticed in our community, who deserved recognition for a lifetime of service,” Chambers says. Ten women were honored that year in what was supposed to be a one-time event, “but it was so successful that it has been an annual event ever since,” she adds.

Patti Clemons is an original member of the WHW committee and the board of directors of Kinderhaven.

“She was on hand for the original Kinderhaven ‘Festival of Trees’ and has continued helping with and donating to that event,” wrote Barb Merritt in her nomination letter. Clemons has also been active in Panhandle Animal Shelter events.

“Janel’s contributions to this world and our community have made a genuinely positive difference in the countless lives she has touched,” wrote Marianne Love and Helen Newton.

Donna Hutter “exemplifies what it means to ‘give back’ to all those organizations that make this community so very special,” according to Barbara Eacret. Donna is a member of Angels Over Sandpoint, sponsor and volunteer of the School Backpack Program and is a Kinderhaven Ambassador.

Myra Lewis moved to Clark Fork with her husband to build the Diamond T Guest Ranch. She also taught business and physical education and coached volleyball.

Marianne Love, her teacher friend, wrote, “It took no time for everyone on staff to develop a great respect for her as she loved her students and provided a positive force in our schools.“

Georgia Simmons’ special gift of collaboration and teamwork  is mentioned in her nominating letters.

Marcia Wilson explains that Simmons’ “ ideas for fundraising and commitment to their success have resulted in more than $1.5 million to be invested in Panhandle Alliance for Education’s classroom grant and endowment fund.”

She also has been affiliated with Kinderhaven, Holly Eve and Bonner General Health’s Heart Ball.

WHW started awarding scholarships to area young women in 2002, according to Julie Jurenka, WHW scholarship committee. The awards encourage young women to become future Women of Wisdom by assisting them in their quest for higher education. To date, 34 scholarships have been awarded.