Seasons: Not what they used to be

I am planning to get married next July. I say “planning to” because I fear that printing definitives about anything personal and happy will tempt the universe to ruin it; but, in an ideal world, I’ll walk down the aisle on a sunny July day in 2021 and celebrate with all my favorite people.

All of the work and preparation leading up to that event is undoubtedly less joy-inducing, as was a recent conversation with Reader Editor-in-Chief Zach Hagadone during which it occurred to me that my marital scheduling was less than ideal. 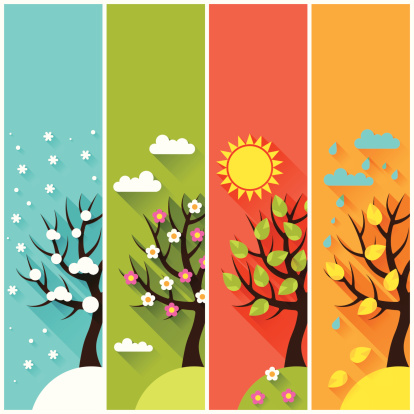 As any journalist who closely covers a municipality will tell you, August is budget season. It’s arguably the most arduous and nerve-wracking time of the year for reporters, who are tasked with sifting through numbers and bureaucratic goop to unearth a story about services and the people who use them.

I’m already thinking about the summer of 2021 and foreseeing myself as a burnt-out bride sending exasperated emails to the county clerk about taxes, cost increases and budget cuts. Will I have a chance to breathe? Probably not — a dilemma over which Zach and I shared a laugh.

Our conversation got me thinking: My adult life isn’t built with the same seasons it was when I was a kid.

On a basic level, we had spring, summer, fall and winter. Those were pretty easy to keep track of. By the time I was in school the seasons seemed more amplified — summer vacation, for instance — and a few more got added in, like sports seasons.

The seasons stayed largely the same until I graduated college and struck out on my own. Things are more complicated now, as my priorities have become more robust and my schedule more complex.

The year begins slow, as I’m sure it does for most people, and rightfully so: we’re coming down off of the holidays, and the weather isn’t good for much (said like a true non-skier, I know). My birthday lands at the beginning of February and, from there, it’s full speed ahead.

For my fiancé’s family, March marks the official start to farm season, and we like to lend a hand wherever it’s needed. We also start our own garden in early spring, and I do my best to acknowledge a sort of half-hearted spring cleaning season around this time.

Unfortunately, there are also two mud seasons at my house: the first when the snow melts, and the second when it starts to snow but doesn’t want to stick. This doubles as the-floors-are-only-cleaned-when-we-have-company-over season.

Some springs bring primary election season — always a joyous and not-at-all-stressful time in the newspaper business.

May in North Idaho means the start of tourist season, when the friendly waves I deliver on my road go unanswered by people without 7B plates who are probably wondering, “Does that lady know us?” No, I don’t. You should wave back anyway.

June and July are a blur, often capped off by The Festival at Sandpoint, marking the end to the summer’s most exhilarating time. August is budget season, of course, as well as the start of a season that’s dominated my falls for four years now: volleyball season.

Coaching volleyball monopolizes my time and mindspace for three months, and overlaps with hunting season — an inconvenient and physically taxing coincidence. Despite my distaste for exercise or counting calories, coaching and hiking mountains a couple months out of the year has certainly done what it can for my health, which is good, because the budget and election seasons absolutely destroy my posture and bring on regular midday donut binges.

Volleyball ends in November, and suddenly I’m staring down the barrel of the holiday season. As we all know, there is not enough time during the holidays to do everything we hope to accomplish, and pretty soon we’re all raising a glass to the upcoming year.

I, for one, will welcome the hastening of 2021. Here’s to another year of seasons you won’t find on a normal calendar.