Time to grease those bearings and perfect that kickflip. The 14th annual King of the Kongcrete skateboard competition is dropping into the Concrete Lake Skatepark in Sandpoint on Saturday, Aug. 17, shedding light on a local sport that attracts athletes of all ages and abilities. 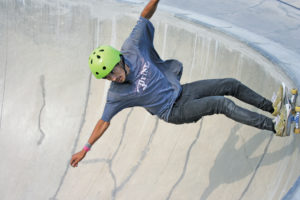 Sandpoint Parks and Recreation Supervisor Jason Wiley credited 7B Boardshop, among other sponsors and organizers, with keeping the city-hosted event alive for more than a decade.

“It gives [local skaters] a place to showcase their skills and get together and have a little fun,” he said.

The event splits skaters into four skill levels: beginner, intermediate, advanced and shop sponsored. Competitors vie for best tricks and best run in their category. The action starts at noon and will run until finished.

While skateboarding isn’t known as a spectator sport, Wiley estimates that King of the Kongcrete attracts three times more supporters than participants. He said oftentimes the skaters’ families show up to cheer on the athletes.

“It’s more of a family event than people might think,” he said, “and that’s part of what makes it so cool.”

Registration is now open online at sandpointidaho.gov/parksrecreation, or the day of the event 10 a.m.-noon at the skatepark, 2102 Pine St.. Competitors must pay a $15 entry fee. Helmets are required and other protective gear is highly recommended.