Inspired and following the leadership of Grace Rookey, a Sandpoint High School sophomore, 70 people gathered March 6 for a peaceful event along the bike path between Michigan and Superior streets in Sandpoint. Attendees held sunflowers; signs that said, “Stand with Ukraine”; and many were dressed in blue and yellow. Sunshine added to the bright colors — making up for the heavy hearts. There were dozens of honks and thumbs-up from people driving by. 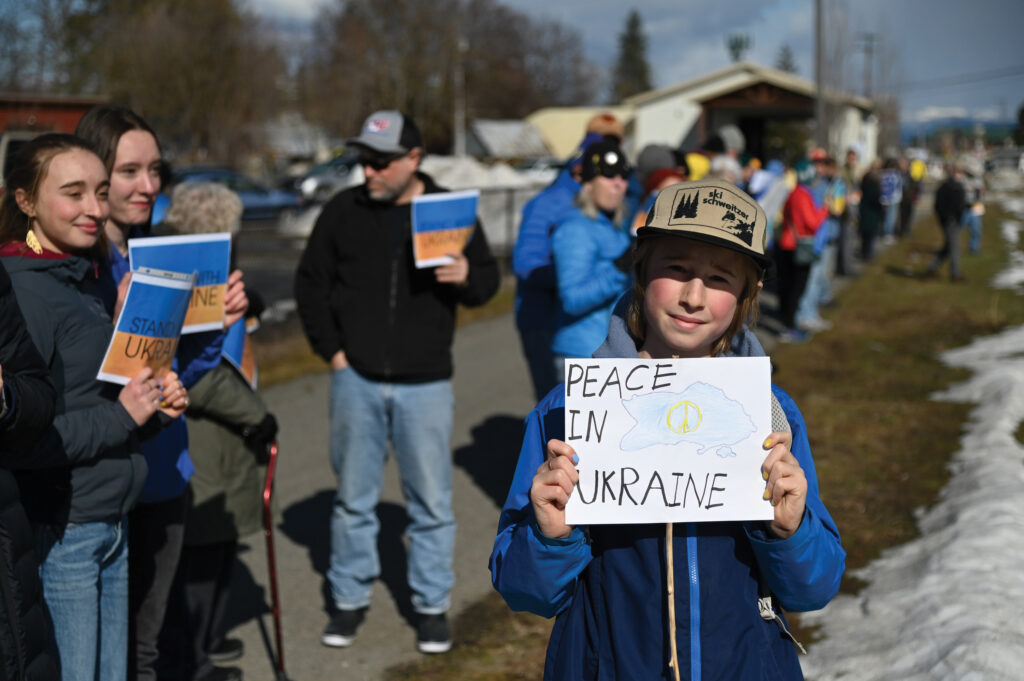 Grace Rookey looks on as her younger brother, Cairn, holds his sign in support of Ukraine. Photo by Tim Bonine.

Rookey reached out to the Bonner County Human Rights Task Force for help organizing the event, stating that she was “seriously concerned about everything that is happening in Ukraine” and wanted to do something to help.

Linda Navarre, long-time BCHRTF board member and retired middle school teacher, took this to heart — and saw it as an opportunity for people who felt like Grace to gather and express their solidarity and support. The BCHRTF quickly moved into action and supported with sign making and outreach.

Those who came together on March 6 showed support for the people of Ukraine and to take a stand against the violence and oppression of their invasion by Russia. Some also spoke about the importance of acknowledging the injustice in many other countries like Yemen, Palestine, Syria, Lebanon and Ethiopia. There was an awareness that as we stand in solidarity, we must remember to care about the humanity and lives of all people regardless of their race, ethnic origin, nationality, education, or social class background.

The smiles and camaraderie shown by the people who gathered together indicated how good it feels to take a stand against conditions that are intolerable. And it’s an example of how much energy is generated when empathy is really shown for all people.

The news is filled with images of heroic Ukrainians standing strong, proving that the real power lies not in the number of soldiers you have, but in the strength of the citizens who come together.

When asked how Sandpoint could be stronger together, BCHRTF Board member Carrie Clayton said, “What we are seeing happening in Ukraine is devastating. It is also an important reminder that we must be citizens, communities, neighbors, that know, care, love and respect each other, because strong, caring communities can overcome almost anything when they are protecting the places and people they love.”

While standing in solidarity helped those who attended this event to help overcome feelings of helplessness and despair, there are other things we can do as well.

This list came directly from a Ukrainian citizen who has now lived through 14 days of war:

• “Spend time reading about the war in Ukraine, it is not stopping yet and I know it is hard to keep track, but please take some time to follow the independent media and get informed;

• “Use your voice and your platform to openly condemn the Russian war against Ukraine. Don’t blame Putin for all of this, saying that it’s Putin’s war. Unfortunately, the regime stands on the backs of many, many people — including the ones walking around my country right now killing people and the ones giving them orders to shoot at nuclear power plants. The international support so far has been amazing, but we need to keep stepping it up;

• “Help Ukrainians refugees get a job, a shelter or help fund humanitarian supplies.”

Brenda Hammond serves as co-president of the BCHRTF, alongside Linda Navarre.