One does not simply walk into a review of The Lord of the Rings: Rings of Power without establishing their Tolkein bona fides. At least that’s how it appears from the volleys of reviews lobbed with orcish density at the Lord of the Rings prequel series, which premiered with two ultra-cinematic episodes Sept. 1 on Amazon Prime. 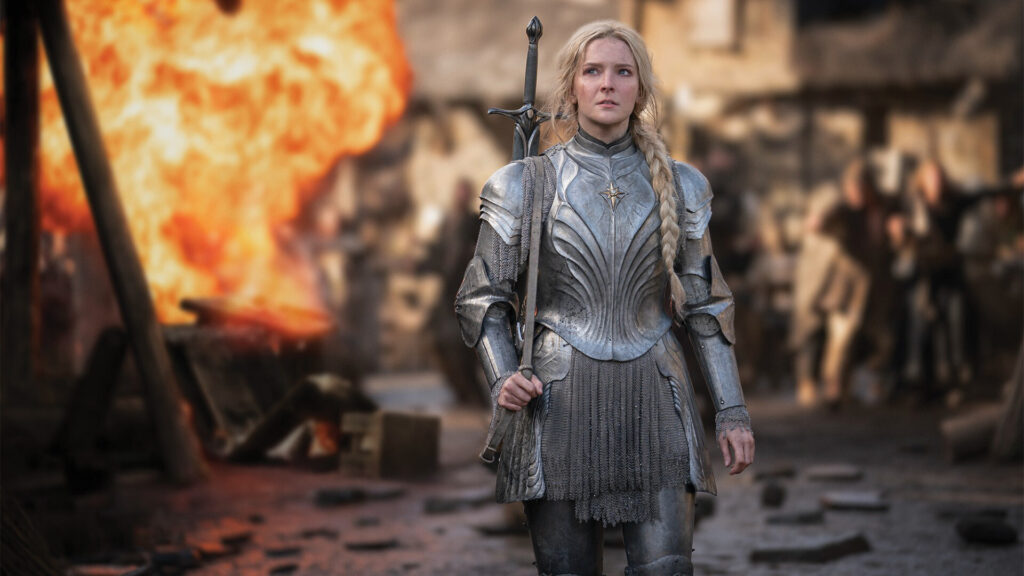 For my part, I have watched the 1977 Rankin/Bass animated feature The Hobbit at least once a year since around 1987. The Hobbit is the first book of “serious” literature that I can remember reading cover to cover, which occurred in about 1990, when I was in the fourth grade. After that, I read The Lord of the Rings at least a half dozen times and watched the 1980 rotoscoped Rankin/Bass version of Return of the King often enough to recognize that Peter Jackson borrowed a lot from it to create his version of the tale in his films, which I have also consumed with regularity over the past 20-plus years (particularly around Thanksgiving, as I find them quite conducive to turkey farts and naps. The less said about Jackson’s Hobbit films, the better).

I’ve also read the lesser-known Farmer Giles of Ham, The Adventures of Tom Bombadil and the inscrutable Silmarillion — or at least tried to more than once — and watched every biography, biopic and even an “Epic Rap Battle of History” on YouTube featuring J.R.R. Tolkein that has come my way.

Suffice it to say, I am familiar with the world that Amazon has sunk about $1 billion into recreating and exploring (exploiting?) on the small screen in 2022, and have many personal associations with it.

Does this mean I like Rings of Power? Does it mean I’m manning the walls of my psychological Helm’s Deep to keep the gate against every inconsistency with Tolkein’s lore contained therein? It’s OK, and nope, respectively.

I’m an adult, and I know the meaning of the word “adaptation.” I’m also aware that Tolkein’s estate has not made the Silmarillion available to filmmakers for option, and so the showrunners of Rings of Power are cobbling together their origin story based on LotR appendices that read more like encyclopedia entries than narratives.

All that said, Rings of Power is shaping up to be a worthy addition to the film-based Tolkien-verse. The show opens during the pre-dawning of the world — that is, before the first sunrise, thousands of years prior to the events of The Hobbit, when illumination flowed from a pair of great trees in the elfin homeland of Valinor. There, the first elves dwell in perfect immortal happiness, among them a child named Galadriel, who LotR fans will recognize as the lady of Lothlorien (played by Cate Blanchett in the Jackson films), and one of the most powerful entities in Middle-earth.

Into the eden of Valinor comes the evil god-like being Morgoth, destroying the trees and extinguishing the light. The elves go to war, pursuing Morgoth, his sorcerer-hatchetman Sauron and their minions across the Sundering Sea to Middle-earth, where that land is laid to waste by centuries of bloodshed.

The armies of Morgoth and Sauron are defeated, resulting in a long period of peace during which the elves colonize Middle-earth, ruling over an increasingly resentful population of dwarves, humans and others.

Enter the star of the show Galadriel (Morfydd Clark), who has grown into a fierce commander, leading a troupe of elves on a mission to track down and destroy Sauron. She is among the only elves to believe that the wicked wizard still exists (which we all know is true).

As she struggles with her obsession, irritating everyone from a young Elrond to the high king of the elves, other strange things are stirring. In a small human village, an elf soldier is in love with a mortal healer, and the two begin investigating what appear to be mysterious ransackings, livestock disease and disappearances; among the harfoots (proto-hobbits), a headstrong daughter (Markella Kavenagh, the other star) stumbles across a “man” who has fallen from the stars as a comet (his name probably rhymes with “Randolph”); Elrond joins a probably-shifty master crafter in trying to get the surly dwarves to create a vast furnace for the fashioning of some instruments of power (probably rhyming with “things”); and, all along, Galadriel keeps finding disturbing evidence of Sauron’s foul deeds.

The show is indeed beautiful — the $1 billion price tag obviously reflected in its visuals. The writing is… not great. Dialogue is often stilted and kind of campy. If you’re hoping to see familiar actors, you won’t. Is it true to Tolkein? Yes and no, but Tolkein didn’t write scripts. Is it better than HBO’s Game of Thrones prequel House of the Dragon? I’d bet a silmaril on it.

Tags: lord of the ringsrings of powershow review