Local emergency crews’ extensive training in aquatic rescues paid off last week when a man and a woman were pulled from the water near the Long Bridge. 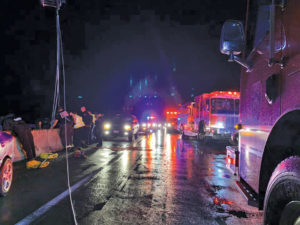 According to Selkirk Fire, Rescue and EMS, both individuals were safely rescued around 10:30 p.m. Friday after an accident left them stranded in the water about a quarter-mile from shore. Thanks to a two-pronged approach involving a firefighter and a rescue boat, the crew was able to pull off the rescue quickly and efficiently. The firefighter was lowered in a dry suit from the Long Bridge, while a rescue boat launched from City Beach to recover the pair. They were both returned to shore via Selkirk Fire Boat 1. The agency didn’t disclose what caused the accident or how the man and woman fell into the water.

Bonner County Sheriff’s Office and Bonner County EMS assisted on the rescue, which caused both lanes of the Long Bridge to be shut down for the duration.