Norilina Harvel, who pleaded guilty to embezzling more than $200,000 from Bonner General Health in May, was sentenced to 90 days in jail on Friday. 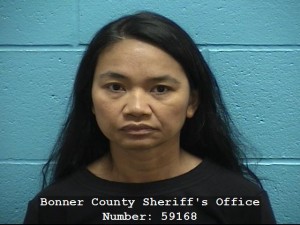 The sentence, which also included a handful of court fees and restitution as a requirement of probation, brings to an end nine months of legal proceedings since Harvel’s arrest. Altogether, Harvel will pay $217,075 in restitution.

“We were satisfied with the outcome, especially the large amount of restitution paid by the defendant,” said Bonner County Prosecutor Louis Marshall. “I was pleased with the cooperation shown by Bonner Health throughout this process.”

An employee of the hospital for 18 years and its chief financial officer for 10 years, Harvel was accused last year of funneling funds into fraudulent bank accounts set up in the hospital’s name. By the time BGH officials discovered the malfeasance, Harvel had already left her position and taken a job outside the state. Once the accusations against her went public at the end of September, Harvel surrendered to the authorities less than a week after her arrest warrant was issued.

At Harvel’s sentencing, Judge Barbara Buchanan noted that while many expect prison sentences for major embezzlement, Harvel’s Level of Service Inventory score, which measures an individual’s likelihood of re-offending, was exceptionally low. Moreover, Harvel and her attorney’s filed a large majority of her restitution payments at the sentencing, with the rest likely to be paid within her probationary period.

While hospital officials were disappointed with the short incarceration period, they appreciated the sense of the decision.

“We would have liked a longer jail sentence,” said BGH CEO Sheryl Rickard. “However, it is more important that she pay back the funds that she took from the hospital, which can only happen if she is working and not in a jail cell. We are pleased that paying restitution is a condition of her probation.”

Likewise, Prosecutor Louis Marshall was happy to have resolution in what proved to be a complicated case.

“These are difficult crimes to prosecute given the large amount of paper evidence,” Marshall said. “We were able to utilize the forensic accountant hired by the hospital as opposed to having to hire our own accountant, which would have cost the taxpayers thousands of dollars.”

Harvel is just the latest in a string of embezzlers that have run afoul of regional businesses and municipalities. In 2012, Susan Hopkins was sentenced to five years in a state prison plus reimbursement payments for embezzling $246,561 from Coldwater Creek. And last year, former Athol clerk Sally Hansen was sentenced to four years in federal prison for embezzling $417,879 from the city.

“This case illustrates the problem in society with embezzlement,” Marshall said. “In general and in this case as well, people who steal a lot of money from their organizations tend to be trusted employees with good educations and spotless criminal records. Managers need to be vigilant as this can happen to any organization.”