“Winning will require a monumental effort by volunteers all across the state,” Mayville wrote in an email, noting that political initiatives in Idaho must gather signatures from six percent of all registered voters statewide and also from six percent of voters in 18 districts. 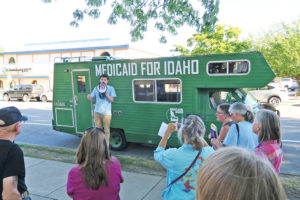 Luke Mayville speaks to a crowd of dozens at Farmin Park.

This comes after Reclaim Idaho’s Medicaid for Idaho Tour, when members of the group traveled the state this summer to encourage people to share their stories of healthcare troubles in hopes of bringing statewide awareness to the Medicaid gap.

“Its head is in the Panhandle. Its limbs stretch down to Salmon and Shelley, Blackfoot and Burley, McCall and Mountain Home. Its heart is everywhere. It has no political party, because it is bigger than the parties,” Mayville said. “A ballot initiative campaign would awaken it.”