As a fan of near-future, dystopian, cyber-tech science fiction, I occasionally find a frightening book that warns how the future could unfold. “The Water Knife,” by Paolo Bacigalupi, is such an adult tale. As I was reading it on a plane, a man next to me asked me about the author’s name, a strange question from a random stranger. I said I thought it must be an Italian family name. The elderly gentlemen politely smiled and said that it is a rather obscure colloquial expression. While difficult to translate, the meaning was something like “a trickster.” Later, I would regretfully and belatedly realize that the gentlemen was an oracle. 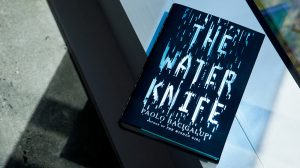 “The Water Knife” pioneers the genre called “climate science fiction.” Its thesis is that, after years of drought and environmental degradation, the politics of the west is dominated by the control and administration of water. Our North Idaho is actually a geographic hydrological anomaly, as it has abundant water within the vast area east of the Cascades and the Sierras called the Great Basin. Most of the west is high desert plateau, and if it wasn’t for the various mountains that collect and concentrate water, the inland west would be a mostly dry, marginal area for humans. In much of the west, water is the precious metered resource that enables life.

In “The Water Knife,” water cartels become powerful entities that control the politics and wealth of the region. Water is the currency of wealth, and entire cultures shrivel up and die. Phoenix bites the dust. Texas succumbs, too, as a failed state of would-be refugees. The federal government decays into ineffective chaos as corporate power perverts government at all levels. Water is more expensive than fuel, and the elite reside in luxurious, highly secured, self-contained biotic communities called “arcologies.”

The water cartels engage in vicious conflicts as they deploy their own high-tech, well-funded militias. They fight over the ability for hydrological control and ownership of the precious historical senior water rights. All this is enabled by the endless flow of cyber intelligence and intrigue. The water knife evolves as the clandestine senior fixer whose many shadowy skills become the point of spear for the water cartels’ battles and political machinations. Enter Angel Velasquez, the water knife for the Southern Nevada Water Authority (SNWA). He is the loyal agent to the “Queen of the Colorado,” Catherine Case—the refined, hyper-intelligent, elegant but at times vicious executive magnate of the southwest water empire.

Angel arises from the streets and gang warfare to become the elite water knife agent of the SNWA. But he has a change of heart when he is serendipitously thrown into relationships with two wonderfully developed characters: Lucy, an east coast environmental journalist, and Maria, a drought refugee courageously struggling to survive at the degrading and thread-bare margins of society. The social contrasts could not be more third world: a world of immense concentrated wealth (read 1 percent) with remaining masses in critical poverty. Angel, as his transformation evolves, makes the quick transposition from the world of the omnipotent hunter to that of the hunted in a wild-ride scenario.

Along the way, there are many references to current tech and politics, such as Angel’s customized Tesla, the book “Cadillac Desert” or the casual stop-and-frisks by security agents. Some references you may not wish to imagine, such as the Clearsacs that you squeeze to filter your you-know-what into drinkable water that all disenfranchised folks must use.

In Angel’s transformation and relationships, Bacigalupi deals with the eternal questions of humanity. He forgoes overt philosophical pontification for focused dialog and context. His fast and nerve-racking pace provides a stage to address each character’s humanity at the micro level of loyalty, trust and social responsibility within personal and professional relationships. At the macro level, each character struggles with the heavy weight of the fallout of human-induced or anthropomorphic environmental degradation, including the degraded role of local, state and federal governments when they abysmally fail. Corporate powers then surge into the resulting political vacuum with their own set of values, rules, power plays and agendas, and it don’t look nothing like democracy.

Current climate change affects the entire globe, and Bacigalupi provides a dismal view of how the scarcity of water resources leads to an increasingly accelerating divide between the haves and have-nots in the West. That leads to an eventual erosion and subsequent destruction of democracy, representative government and the American dream. All this is illuminated through the sharp, well-written and thought-provoking dialog of the story’s characters. Each must deal with their survival and personal demons. But each cannot help but contemplate how they arrived, where they desperately need to go and who can help them make the journey. Elusive trust must be tested and re-invented every moment. Older folks in the story remember our present time as the golden-age utopia of milk and honey where water ran freely, an era of wealth and stability.

The frightening aspect of “The Water Knife” is the pessimistic but entirely believable extrapolation of technology, politics, corporate greed, economics, authoritarianism and environmental tragedy all rolled into a well-researched, scientifically plausible cultural rendering of a desperately dry geographic landscape in the Inland West. Be sure to keep a glass of ice water nearby if you choose to read this extraordinary tale; guaranteed, you will never take it for granted again.