How the weather affects the music you listen to

It rained most of last week, and as a result I’ve found myself listening to work by more melancholy, contemplative artists on our office Spotify account. Or, as staff writer Lyndsie Kiebert calls it: “sad bastard music.” 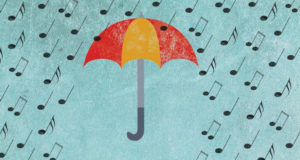 The truth is, the weather plays a vital role in the type of music we listen to. So much so that Spotify teamed up with AccuWeather in 2017 to find out what people listen to in different weather in order to introduce a new playlist called “Climatune.”

Spotify correlated an entire year of weather data from AccuWeather with more than 85 billion Spotify streams to create the playlist, which lets listeners check out the weather in their region, as well as listen to a playlist that reflects the weather in a listener’s area. Spotify accessed listening data to correspond with five types of weather: rain, clouds, snow, wind and sun.

Some of the analytics are what you’d expect. Spotify found that sunny days typically spur higher energy, happier-sounding music that feels fast, loud and noisy, as well as cheerful, euphoric tunes. Rainy days brought lower-energy, sadder-sounding music with more acoustic than electronic sounds. Instrumental songs are most preferred when it snows.

“There is a clear connection between what’s in the skies and what’s on users’ play queues,” said Spotify data researcher Ian Anderson. “For almost all of the major cities around the world that we studied, sunny days translate to higher streams of happier-sounding music. Sunny weather has an even bigger impact in Europe.”

Some cities bucked the trends, however. Both New Yorkers and Philadelphians are the most affected by bad weather — residents of these cities substantially changed their listening habits when it rains. Instead of listening to quieter music when it rains, Chicagoans actually get excited and stream happier music. Music lovers in Seattle and Miami don’t care about cloudy days; both cities’ populations listen to more energetic music on cloudy days. San Francisco, on the other hand, leans in hard on cloudy days and plays the saddest of “sad bastard music.” Houston music lovers respond the strongest to rain — they ditch electronic sounds and drum machines and increase listening to acoustic instruments by a whopping 121% when it’s wet outside.

Another question some researchers are asking is whether climate change will shift the ways we react to certain songs. Will we be as eager to queue up The Beatles’ “Here Comes the Sun” when slogging through another long, sweaty heatwave? Will we so joyously scream Buster Poindexter’s line, “Feelin’ hot hot hot,” when a drought continues unabated for years?

Aplin looked into how many song titles, band names and lyrics contain references to weather and found about 800. Of the 500 greatest songs of all time, as Rolling Stone called it in 2011, 7% were weather related. Bob Dylan, John Lennon and Paul McCartney were the most prolific in this category, Aplin found.

While the sun was referenced most often, rain came in a close second. “Frost” and “blizzard” were at the bottom of the list. Love and relationships were the biggest single category for weather metaphors. No surprise there.

“What we found about pop music was that the lyrics can be used very clearly to link the weather to a particular emotion, and usually the sun is positive and the rain is negative,” Aplin said.

One exception to this is country and western songs, which refers to rain as a positive — notably because of its vital connection to agriculture.

Aplin’s researchers were also intrigued to find that in the 1950s, which was an active decade for hurricanes, more music was written about wind and storms. She believed that potential shifts in weather might also bring about a change in musical themes as climate change brings ever-more frequent extreme weather events.

Instead of carefree songs about sunshine and gentle breezes, Aplin said darker, more dramatic songs could be created instead.

“You might find more songs about severe weather because that is more part of people’s lives, or a backdrop to their lives, than the weather we have now,” she said.