Queen B. Drag show anything but a drag

When the going gets tough, the tough… put on a dress?

It’s certainly true for John Dowling. When he puts on his high heels and make-up, a remarkable transformation occurs; he becomes “The Misty Boxx” and develops a stage presence that residents of small towns like Sandpoint aren’t often exposed to. 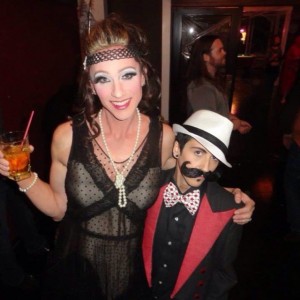 Dowling, who lives in Sandpoint with his wife (who also dresses drag, becoming “Corbin Thicke”), said he started dressing drag in 2010 as a way to express himself.

“The activism side is what keeps me doing it,” he said. “Taking [drag] to small towns exposes it to people that are not normally exposed to gay culture, and I’m hoping it’s in a positive way. People tend to give entertainers more leeway.”

The Queen B. Drag troupe consists of about a half dozen individuals who sometimes ask locals to participate for their occasional shows.

“It’s a lot of fun,” he said. “We emphasize the fun and don’t hammer on any issues or anything. We just want people to laugh and have a good time.”

The troupe first started performing in Sandpoint in 2012, when they appeared at La Rosa Club.

“It was a friend of mine’s birthday, and La Rosa let us use their space,” said Dowling. “Initially, I had mixed feeling about it, being such a small town. I didn’t know how Sandpoint would react to it. I thought we’d see people protesting on the street. After three years of performing, we’ve only had a few letters published in the Daily Bee condemning us for ruining the family atmosphere of Sandpoint.”

Gay culture is always stifled in small towns, according to Dowling, and the drag shows allow that closeted culture to embrace their existence.

“We know there are members of the gay community in Sandpoint,” said Dowling. “They have no place to go and meet and be themselves. We want to give them a place to relax and have fun. We bring the humor out in it. There’s a lot of comedic relief.”

According to Dowling, the small negative backlash that has occurred is nothing that concerns him or the rest of the troupe.

“There will always be people who don’t like what you do, no matter what you do,” he said. “I’ve met the most redneck people who came up to us after the show and said they were impressed with our performance and had changed their mind on the issue. You’d never think logger-type guys would say that kind of stuff to a drag queen, but they did, and it meant a lot to us.”

Dowling pointed out that he does not identify himself as a homosexual or transgender. “I consider myself more of a two-spirit; the Native American way of looking at it, where you embrace both female and male parts of yourself. I’m married to a woman, and by all appearances we seem like a straight couple.”

Two summers ago, Dowling and his wife were married in full drag—him dressed as a bride, her dressed as a groom.

“It was a total freak show,” he said. “We had a bearded lady, we had a person hammering nails into their head. It was wild.”

At the show on Saturday night, audience members are expected to tip the performers if they want to be up close and personal with the dancers. There will be games, as well as dancing between sets. The performers always make time after the show to talk with the audience and pose for pictures with them.

For Dowling, these shows represent not just a good time but a surge forward in the way gay communities are viewed in general.