Pete Thompson, former owner and co-founder of the Bonner County Daily Bee and a self-described “newspaperman” to the core, died at his home Sunday. He was 89. 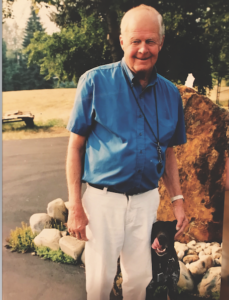 A mentor to many regional journalists, a tireless volunteer for charitable organizations like the Sandpoint Lions and a strong advocate for Idaho conservation, Thompson will be honored in services 11 a.m. Friday at St. Joseph’s Catholic Church.

As the owner of the Bonner County Daily Bee until its sale to the Hagadone Corporation, Thompson helped launch many a young career in the 1980s. One such individual is Keokee Publishing owner Chris Bessler, who considers Thompson to be a mentor.

“Pete was a heck of a good guy, and because he owned the paper in his hometown, he put a lot of heart into it,” Bessler said.

Thompson was friends with former Idaho Governor Cecil Andrus, who passed away in 2017. Shortly after the former governor died, Thompson shared fond memories with the Sandpoint Reader about the fishing trips and visits he and Andrus enjoyed. United in their commitment to conservation policies, Thompson was appointed by Andrus to serve on the Idaho Fish and Game Commission.