Development at former U of I property on N. Boyer will be decided by City Council

Nearly three weeks after tabling a decision on the University Park development — proposed for the 75-acre former University of Idaho property on North Boyer Avenue — Sandpoint Planning and Zoning commissioners again took up the subdivision project at their Oct. 6 meeting, unanimously agreeing to recommend that the City Council deny the application.

Reading from the motion to deny, Commissioner Slate Kemp said the project was “not consistent with the overall planning goals outlined in the comprehensive plan.” 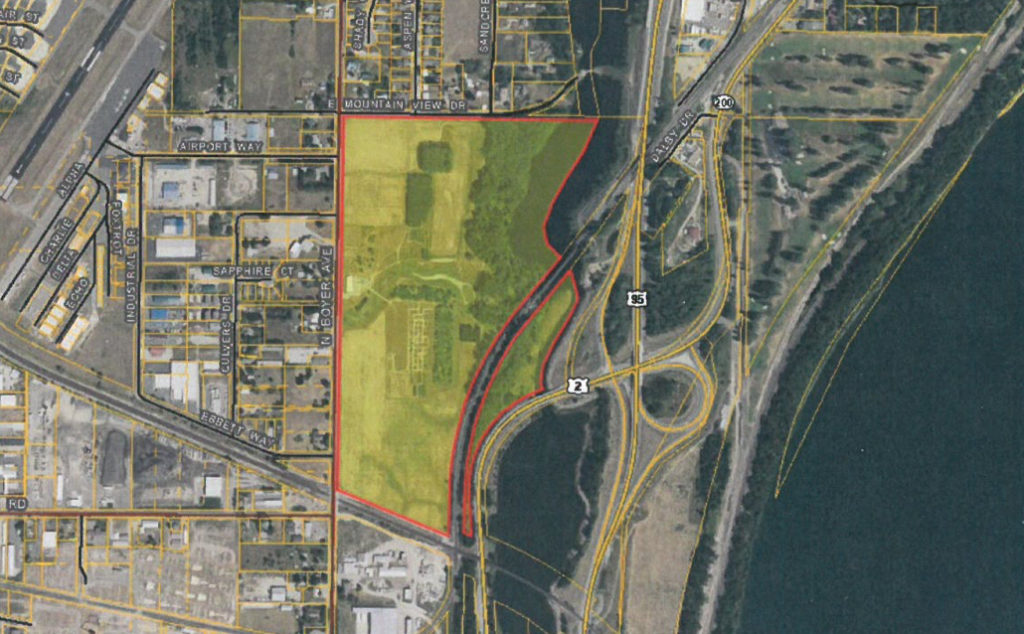 An aerial view of the Univ. of Idaho property on North Boyer. Courtesy image.

Commissioner Forrest Shuck recused himself from the meeting, given once and potentially future business dealings with the developers, and Commissioner John Hastings was absent.

Specifically, commissioners stumbled over a 2,000-foot-long block of double-frontage lots planned to run along the east side of North Boyer, and worried about the lack of continuing east-west streets across Boyer.

Notable as the last large tract of developable land within Sandpoint city limits, the draft layout of the University Park subdivision calls for access via North Boyer at two points in the south and one point in the north, at East Mountain View Drive.

The southernmost roadway, opposite Culvers Drive to the west, would access the proposed commercial area of the development. To the north, another road would lead into and out of the subdivision. Between that ingress/egress and East Mountain View, however, would be the long block of double-frontage lots that gave planning commissioners — and neighbors concerned about increased traffic — so much trouble.

At the Sept. 15 P&Z meeting, Commissioner Cate Huisman worried aloud that such a long block of lots — all with their backyards abutting the busy street — would result in “a canyon of plastic walls” akin to some large-scale subdivisions in the Coeur d’Alene and Rathdrum Prairie areas.

At the Oct. 6 meeting, Huisman applauded the developers’ efforts to build “badly needed housing at moderate prices on moderate lot sizes.” However, she added, “We’re going to be living with this plan for the next 100 years,” making it all the more important for planners to maintain “the charm and comfort of Sandpoint neighborhoods that we say we’re looking for.”

Sandpoint planning requirements stipulate that blocks must be between 300 and 600 feet and double frontage lots are prohibited unless topography, integrated street design or other conditions make it “undesirable” to meet the standard. To construct the 2,000-foot block of double-frontage lots, developers Tim McDonnell of K-M Enterprises of Idaho and Derek Mulgrew of M&W Holdings would need to secure a variance, which commissioners ultimately didn’t think was warranted.

Representing the developers, Jeremy Grimm of Whiskey Rock Planning and Consulting — and a former Sandpoint planning and community development director — told the Reader in an email following the P&Z meeting that, “We fundamentally disagree with the recommendation of denial made by the Sandpoint Planning Commission and are dumbfounded by their decision. They dropped the ball and were myopic, applying not the principles laid out by the adopted design standards of the various master plans, but rather dove into arbitrary minutia, whims, hopes and their personal desires for the development configuration of the land … The Planning Commission seemed to be looking for any reason to deny this proposal.”

In their hour-long discussion Oct. 6, P&Z Commission members sought ways to either open the long double-frontage block to North Boyer or otherwise break it up. Some commissioners questioned whether developers could allow driveways entering onto North Boyer while others noted that planning rules call for the continuation of existing streets into new developments — specifically, in this case the northern end of Culvers Drive and Airport Way, which would have dead-ended into North Boyer, per the proposal.

“I don’t see a justification for the block length to be that long, other than streets cost money and that’s obviously going to add significant cost to the project and it’s going to take more time and it’s going to cut into a number of lots, theoretically,” said Commissioner Mose Dunkel.

“I don’t think there’s been a justification put forward to make the double fronting lots a requirement or that they’re a necessity in this location,” he added. “Not saying that I love people pulling on and off directly onto Boyer from their driveway, but that is a reality on a lot of other areas on Boyer already.”

Commissioner Jason Welker came to the Oct. 6 meeting prepared with concerns drawn chapter and verse from City Code and the Comprehensive Plan, opening much of the discussion on the various issues raised by the project.

In addition to questions about block length, double-frontage lots and street continuity, Welker also questioned how snow removal would be accomplished on the east side of North Boyer (that would be handled by the city, not residents); whether accessory dwelling units would be allowed to back up within a few feet of the Boyer sidewalk (they aren’t prohibited); and whether a 25-foot common space could be built between Boyer and the University Park lots so as to avoid their being classified as double-frontage (that option isn’t part of the plan).

“Perhaps maximum block lengths are there in our Code for a reason,” Welker said.

Grimm, in his email to the Reader, argued that the commission “completely disregarded” the Urban Area Transportation Master Plan, “which calls for the minimization of road entrances and driveway approaches along Boyer Avenue.”

“This suggests they either don’t understand the transportation master plan or are staging a mutiny against it,” he wrote, adding that such a decision sends a chilling tone to the development community, which is “already gun shy about developing within Sandpoint city limits.”

“Extraordinary review fees, months-long delays to receive responses from the Building Division, arbitrary and unclear decisions and application of the City Code in total raise red flags,” he wrote. “The unfortunate result is that development interest is being pushed out into Bonner County and adjacent communities, where the regulatory burden and entitlement process is far more consistent and clear.”

Commissioners were not insensitive to the balancing act they were being asked to perform with the project. While universally supportive of the open space and pedestrian access elements of the proposal — including a potential partnership with Kaniksu Land Trust to deed about a fifth of the Sand Creek-adjacent property as a conservation easement — and heartily in favor of more affordable housing, concerns about infrastructure, neighborhood feel and traffic impacts won out.

“There may be some conflict here between optimal transportation and optimal housing,” Huisman said.

The proposal now goes to the Sandpoint City Council for a final decision, though it was immediately unclear when the matter would be addressed.