I’m a massive nerd when it comes to anything in the fantasy genre. Lord of the Rings, Dungeons & Dragons, Game of Thrones — well, maybe just the first five seasons. I’ll be the first to admit that many fantasy tropes have corrupted our understanding of the medieval period. It’s understandable how we may have modified history to suit our biases; the time in which we live now is so completely different from what the world was like back then that we feel we have to inject parts of our modern lives into the settings for them to make logical sense. 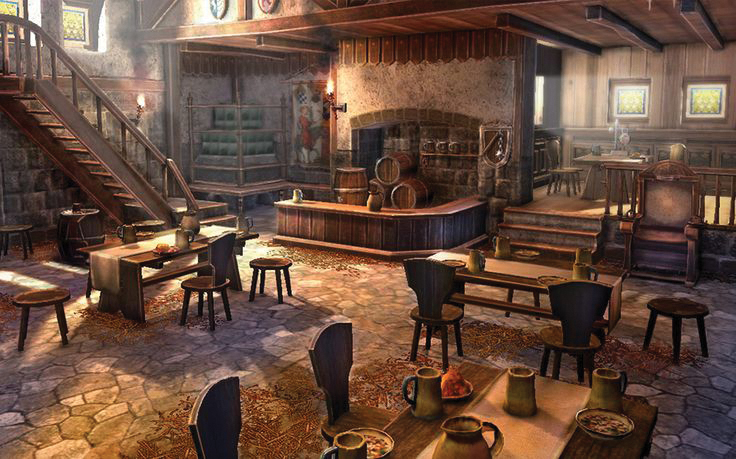 Today, we will take a look at a few common ideas in the fantasy genre that have warped our understanding of history.

Every fantasy story has featured the small-town tavern or inn — it’s the place where adventurers go to kick up their feet after a long battle, or is commonly where they’ve gathered to meet. All differences are set aside at the table behind a flagon of ale and, once they’re done, they can head upstairs for a good night’s rest.

The most common misconception about inns and taverns is that every town had one. While pilgrimages were common during the medieval period, it was often the poorest members of society or members of the clergy that were traveling. It wasn’t very Christian of anyone to charge either party for room and board, so it was more likely for people to stay with relatives along the road. Occasionally, they would stay with complete strangers in their homes.

Additionally, inns and taverns were almost never under the same roof. They were frequently different businesses altogether. Owning a tavern would have been a full-time affair, as liquor and food were extremely difficult to transport over long distances. Managing an inn would have been quite similar to being a modern-day property manager, rather than a hotel mogul. It would have been the establishment owner’s job to make sure people were paying their rents and not trashing the building in the process. Inns were generally just a few large rooms with a shared sleeping space per room, as it was easier to build one big bed than a dozen smaller ones.

The kingdom comes to the king

It’s often displayed in fantasy that the king sits upon his throne, and his subjects come to him to pay their tributes and respects, as well as bring him their disputes. The first few moments of Game of Thrones actually held more truth to how a king operates than virtually the entirety of the rest of the series. The life of a king was often spent traveling — going to his subjects to make sure they were behaving and still loyal.

Having a king visit a noble’s home was seen as both an honor and a burden. House guests, much like dead bodies, begin to stink after a few days, and the king would often bring hundreds of guests wherever he went. The burden of feeding and boarding all of these guests fell squarely on the shoulders of whomever it was the king was visiting — and if the king liked it there, he would stay for weeks at a time.

This was likely more than simple mooching, as it could be a supreme test of loyalty. Those who had considered betraying their king and pledging their allegiance to another could be pushed as they watched their food and drink stores dwindle away. It would be much easier for the king to deal with a traitor when his entire retinue was currently occupying the castle. Additionally, all of this traveling around and living his best life at his subjects’ expense allowed the king to both keep an eye on his kingdom and maintain his own coffers while he was at it.

There were few classes, and they were set for life

Societal class is a tricky subject, no matter what culture you are a part of. It’s common in fantasy settings to see a division of two classes: the peasantry and the nobility with no crossover between them. In actuality, there was believed to be considerable crossover, and even a host of other classes thrown in between. Social class in the medieval period — much as it is to this day — was dictated by three factors: wealth, education and influence.

Much of these three factors could be bypassed to a degree if one were to devote themselves to the clergy, which consisted of its own complex social class system and frequently interjected itself into the daily lives of nobles, peasants and everyone else.

Social classes were frequently shaken up during times of conflict, such as the Crusades, when tens of thousands would march off to war and sometimes never return. Frequent rebellions also led to the destruction of noble houses, allowing for other social classes to rise in their place. This was especially true during the Wars of the Roses in England, from 1455 to 1487.

The conflicts are quite dense and difficult to summarize, but they encompass a number of bloody rebellions, executions and middle-class nobles rising to the English throne through treachery, ambition and marriage. If you’re curious, there are volumes of information and four seasons of The Tudors on DVD at the library.

It might not seem like it sometimes, but we really have evolved as a society in the past thousand years. We’ve gotten better at many more things than simply killing each other; though, I believe we can always improve.