Putting the ‘champ’ in champagne

Learn the art of sabrage and you’ll conquer every party

Some activities seem to have everything going for them. Sabrage, or the art of opening a bottle of champagne with a saber, must be high on the list. It has a rich history, it displays a certain flair to an already exuberant activity, it adds class to an already classy beverage, it involves a sword and it’s inherently dangerous. 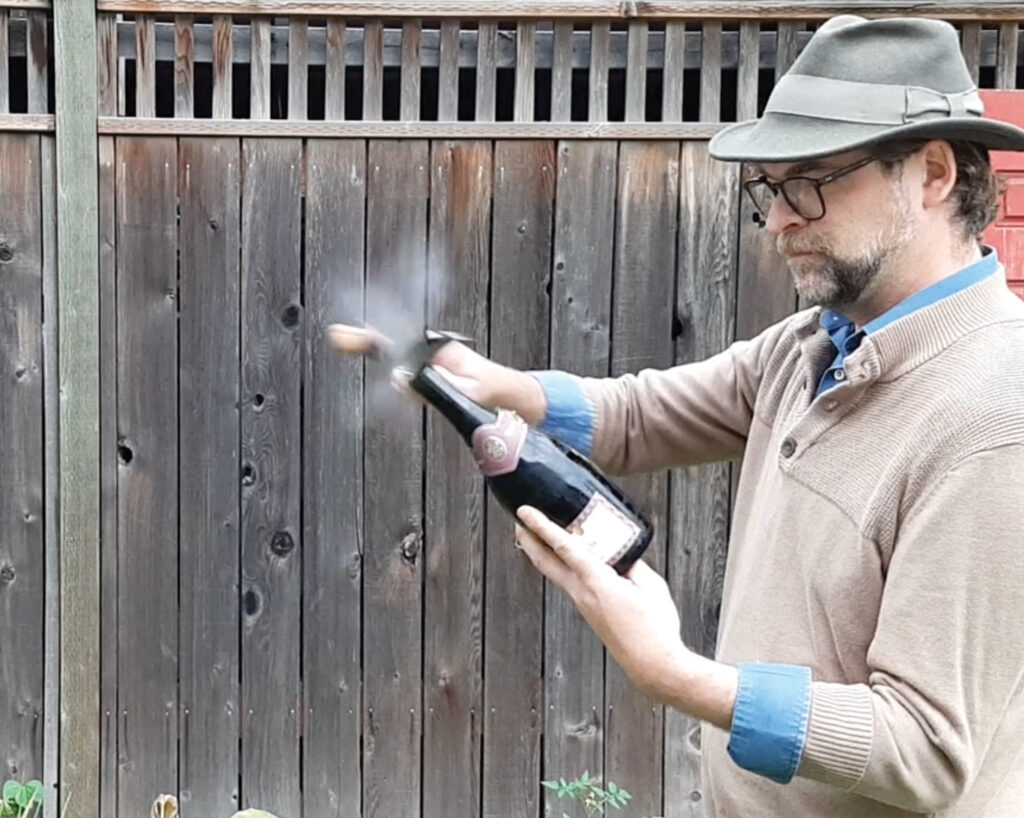 Odds are most people have at least a passing familiarity with sabrage, and probably associate it with the poshest of posh occasions. Its origins, however, are much more rough-and-tumble.

The most-told tale is that Napoleon Bonaparte’s Hussars, being on the move, didn’t have time to pull over on their horses and pop corks by hand. Thus, they used the edge of their blades to sever the corks from the necks of their bottles for some bubbly to go.

From there, sabrage has been deeply ingrained in the popular imagination as something rakish and reserved for high-style hotels and aristocratic celebrations. However, anyone can do it — provided they follow some very explicit rules — and doing so will automatically make them a cause celebre at any gathering.

I know this because Reader Publisher Ben Olson knows me quite well, and therefore gifted me a specially designed “champagne saber” for my 42nd birthday last month. Since then, I have successfully sabraged no fewer than seven bottles of sparkling wine, all without incident and to the delight of all who stood by in witness.

Before an explanation of the process, it is imperative to cover the physics at play and why they are important not only to a successful performance of sabrage, but one in which no one is permanently injured (nor any unnecessary loss of champagne is suffered).

Make absolutely sure the champagne or sparkling wine you’re going to open is cold. That is, at least 45 degrees Fahrenheit, but certainly not almost frozen. (So don’t go sticking it in your freezer.) This can be accomplished by chilling in the fridge for 24 hours, buying the bottle already well chilled from the store and/or turning the bottle upside down in an ice filled bucket for at least 10 minutes before opening.

Warm champagne, aside from being disgusting, is more active in the bottle, meaning the cork is more liable to spontaneously pop itself. Whether you’re ready for it or not. Don’t shake the bottle, for obvious reasons. If those reasons aren’t obvious, you shouldn’t be drinking champagne.

So much emphasis is placed on the proper temperature of the bottle because it contains so much pressure from dissolved carbon dioxide. Good French champagne (which is really the only kind that can be properly called “champagne”) holds up to 90 pounds per square inch of pressure. Lesser types of sparkling wine are still somewhere in the 60 psi range.

For comparison, most passenger car tires are recommended to carry 32-35 psi. No matter, that’s enough force to propel a cork at upwards of 50 miles per hour — sufficient to cause permanent eye damage (or blinding), shatter glass and, at the very least, leave a nasty bruise. This is such a danger to the eye, that the American Academy of Ophthalmology has an entire article on the dangers of flying champagne corks.

All that out of the way, sabrage — which almost every source refers to as an “art” — is the precise deployment of physics to create a controlled release of this pressure, which when done correctly will shear away the cork from the bottle neck, carrying with it the glass ring (called an “annulus”) in which the cork remains trapped. The very best sabrage will also result in little to no wastage of wine.

Preparation is critical to success.

Remove all the foil from the bottle neck — not just from around the cork. Remove the cage, also called a “muselet.” The bottle is now “live,” meaning it could go off at any time.

Hold the bottle in your non-dominant hand, with your thumb inside the depression at the base — called the “punt.” Being absolutely certain to aim away from any people or objects that could be damaged, and remembering that corks have been recorded to travel distances of between 20 and 70 feet, depending on internal conditions, angle the bottle at 45 degrees away from your body. It’s also a good idea to place a towel over the arm with which you’re holding the bottle.

Rotate the bottle in your hand until you locate the seam, which will be a thin line in the glass running from the base all the way up the neck. Where that seam meets the annulus holding the cork is where you will strike. That point is the Achilles heel of any champagne bottle, where it is upwards of 60% weaker than anywhere else.

Now the fun part: Take up your sword/saber/knife — the one I received from Ben is a handsome 16 3/8-inch Laguiole champagne sword with an ebony handle, which retails for about $50 — and place it blade down. Some sources say it doesn’t matter whether you use the sharp or blunt end, while others strongly caution against striking with the cutting edge. All I can say is my Laguiole is blunt on both edges, and it hasn’t missed its mark yet.

Angle up the blade slightly and slide it along the seam, making contact with the annulus and (hopefully) sending the cork flying.

Among the many important points to pulling off sabrage is that you swing “through” the cork. Your sabrage stroke must be an unbroken motion — as if the cork isn’t even there. If you don’t do this exactly right, you’ll create a fracture in the bottle and all that pressure will either blow back at you or expand outward (or both). Don’t try to hack at it or strike it with a quick whack, and never, ever, ever strike downward on the neck of the bottle. Any of these incorrect methods will result in the bottle (and its contents) exploding in your hand like a boozy hand grenade.

The stroke doesn’t take much force, either, having little to nothing to do with the power of the strike, but where on the bottle is struck.

Follow those steps and you’ll be sabraging with the best of them — or at least not showing up in any of the thousands of “sabrage fail” videos on the internet. There’s nothing quite so embarrassing as reaching for greatness but coming up short. Just ask Napoleon.