Unpopular opinion: I’m not a super big fan of most of what we eat during the holidays. I like turkey and all the trimmings, but it’s more to do with ritual and nostalgia than actual preference. I’ll eat turkey sandwiches all year long, but there are some pretty darn long odds of me cooking a full bird and chowing down on stuffing in, say, mid-August. Combine that with the general freight — financial, emotional and physical — that comes with the weeks between mid-November and Dec. 31, and that’s a lot of stress eating of buttery meat.

All this is to say that New Year’s Eve and its accompanying day after is high in the running for my favorite holiday — I love its secularism and freedom from dubious history, its mingling of self-reflection and celebration, and its better-than-average food and drink. Given all that, it doesn’t seem fair that Thanksgiving and Christmas — the latter especially — get to eat up weeks on the calendar while New Year’s is essentially one and done.

This year, more than most, feels like we need to lean on as much celebration and superstition as we can to launch us clear of the events of the past 53 or so weeks — and really the events going all the way back to 2016.

In that spirit, I’m going to eat good-luck foods at least through the end of this month, stretching out the hope and celebration of the new year for as long as possible. 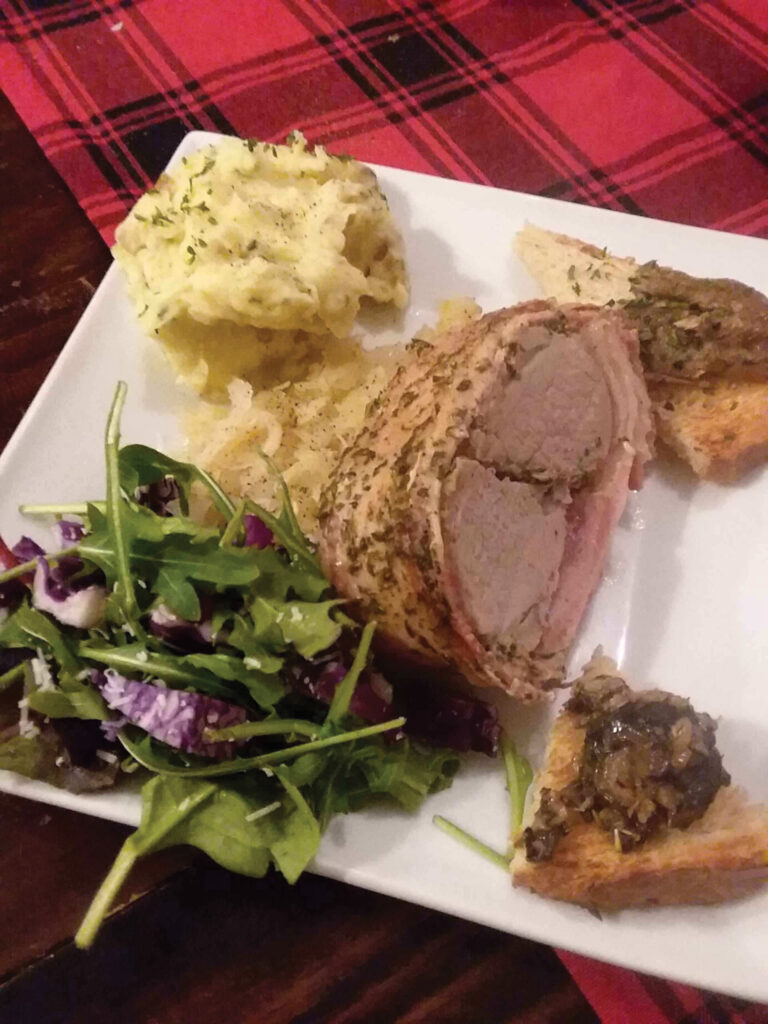 A feast of pork loin wrapped in bacon, served with mashed potatoes, escargots and pickled herring on toast. Photo by Zach Hagadone.

Pigs have long been symbols of prosperity and good luck for the new year — the obvious, though frankly grim, reasons for this being that they are fat and tasty, and the ownership and slaughter of them by humans has always been highly beneficial to the humans. Another reason, which I find compelling, is that while barnyard animals like chickens and sheep dig backward with their hindlegs, pigs are ever and always rooting forward — an earthy reminder to do as Winston Churchill recommended and “keep buggering on.”

For 2020 New Year’s Day I cooked a 2.3-pound pork loin, rubbed in olive oil; spicy English mustard; and salt, pepper, rosemary, parsley, garlic powder and a few pinches of crushed basil; then wrapped it with strips of bacon and drizzled with honey. Cover it with foil in a deep glass baking dish, then bake it at 325 degree Fahrenheit for about an hour and a half, slice it up and serve.

Alongside pigs, fish also have old associations with abundance and, according to some sources, our finned friends are likewise known for their perpetual forward motion. There are too many ways to prepare fish to mention here, so I will stand up for one of my favorite ways to consume ichthyoids, which almost no one else likes: pickled and/or tinned.

As it turns out, preserved fish have a proud place in new year cuisine. Scandanavian peoples, in particular, traditionally eat pickled herring, in particular, to mark the turn of the calendar — the dish symbolizing hopes for a robust catch and drawing on the preserved stock of fish meant to tide folks over during the long dark of a far northern winter.

I like to put pickled herring on squares of toasted rye bread or English muffin bread, topped with a spritz of lemon and some cracked pepper. I also love a sandwich of sardines, spicy mustard and arugula.

In large part because of Americans’ immigrant history, cabbage often gets a bad rap as a low-rent vegetable whose boiled stink filled the stereotypical cramped hallways of 19th-century tenement buildings. True enough, cabbage has been a staple food for poor people for a long time, but that also means it’s a crop whose abundance can be relied on, making it a good-luck food that even my soon-to-be 6-year-old daughter enjoys eating raw.

I, too, like to munch on raw cabbage — particularly in a salad of mixed greens and dressed with balsamic glaze (not vinegar, because it’s too runny). I’m an even bigger fan of sauerkraut, though, and that too is an aged traditional new year food in central and eastern Europe.

As with pickled fish, sauerkraut combines the hopes for a healthy upcoming harvest and celebrates the foresight to lay in a stock of preserved sustenance for the winter.

OK, this might just be in my house, but this year we decided to bring snails into the pantheon of our good-luck foods. I was embarrassingly old when I first tasted escargots, which happened about three years ago on a visit to Montreal, Quebec. There I had it served on a bed of paper-thin sliced jambon (ham) and lacy strips of parmesan. To introduce my kids to snails, I sauteed three or four diced cloves of garlic with a hefty handful of diced crimini mushrooms, juice of half a lemon, a tablespoon of butter, salt and pepper, and rosemary, then dropped in the snails. I used a can of one dozen snails (no shells), drained them and patted them dry before cooking and serving on a crostini with grated parmesan.

As for their significance to celebrating the new year, I’ve decided snails are lucky because they’re slow and steady, and we all know that wins the race.