The court proceedings for a public records lawsuit against Rep. Priscilla Giddings, R-White Bird, won’t take place until after the adjournment of this legislative session, according to legal representatives.

Giddings, who is running for lieutenant governor, is the subject of a civil complaint filed by Erika Birch, a Boise attorney who represents the 19-year-old legislative intern who accused former Rep. Aaron von Ehlinger, R-Lewiston, of rape in April. 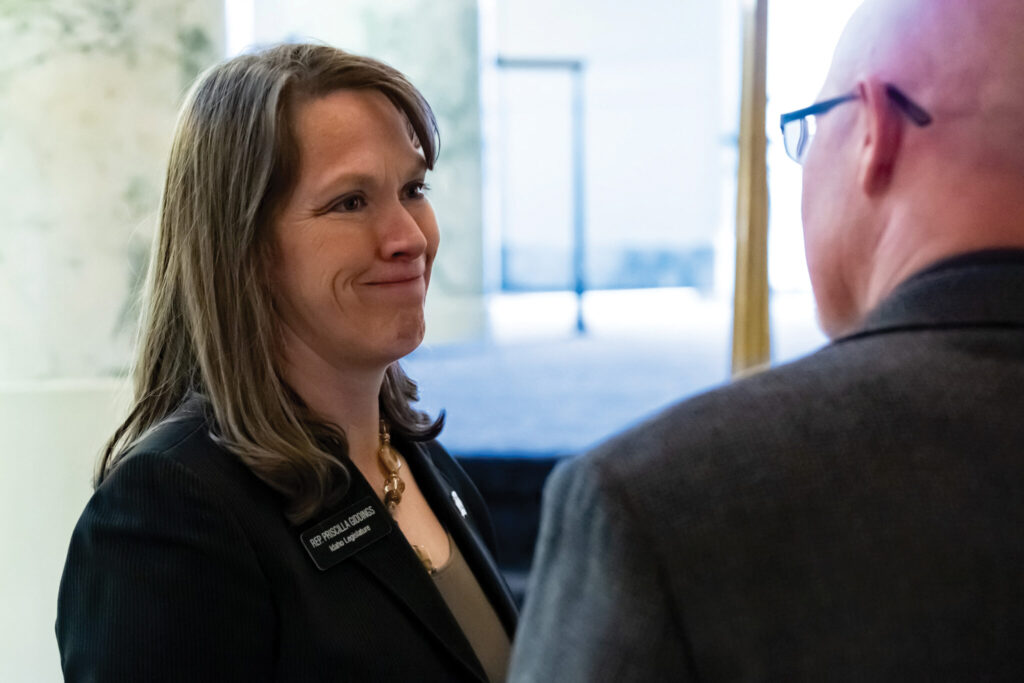 Rep. Priscilla Giddings, R-White Bird, greets supporters in the House gallery before the session at the statehouse in Boise, Idaho on November 15, 2021. (Otto Kitsinger for Idaho Capital Sun)

Birch’s complaint states she sent a public records request to Giddings on Aug. 19, 2021, for any written or electronic communications between Giddings and von Ehlinger that were related to her client, who is referred to as Jane Doe to protect her identity.

The Idaho Statesman was first to report on the complaint.

Two days after Birch’s request, Giddings responded to Birch by saying, “My office does not have any public record related to your request that isn’t already public. I have asked the Legislative Services Office to search their databases as well. My office considers this request closed.”

In an emailed response, Birch said she did not know what Giddings meant by her statement and cited two sections of Idaho Code related to the Idaho Public Records Act that Birch said Giddings did not follow with her response, including identifying a statutory authority for the denial of the request.

According to the complaint, Giddings did not respond after Birch’s follow-up email. Birch then sent an email in December reiterating her request to “avoid initiating a lawsuit” that also went unanswered, according to Birch.

Giddings could not be reached for comment by the Idaho Capital Sun. She has posted about the lawsuit on her campaign page on social media.

“This lawsuit is over a ‘public records request’ for records that don’t exist,” she wrote. “The legislative services office even searched all my files and found nothing related to their request.”

Lawsuit is over process and compliance with the law, Boise attorney says

Under Idaho’s Public Records Act, the request would include letters, emails, text messages, chats, instant messages or any other communication, whether or not it took place on state-run devices or platforms. If the content of the messages was about Jane Doe or the Ethics Committee proceedings, the records would be subject to public disclosure.

Wendy Olson, who is representing Birch in the civil suit, said it doesn’t matter whether the documents exist or not.

“The request was made for public records, and then rather than responding substantively, Rep. Giddings responded the way she did,” Olson said. “That’s not an appropriate response under the public records law, so the purpose of the lawsuit is to enforce the [law].”

In Idaho, legislators can invoke a constitutional privilege against civil suits during a legislative session, and Giddings has taken that option, Olson said.

“We want the records, we want an appropriate response to see if there are any records, and we have agreed with the [Idaho] Attorney General’s office to hold off on resolving this issue until the completion of the legislative session,” Olson said.

According to court documents, Deputy Attorney General W. Scott Zanzig has been assigned to represent Giddings in the case, but the office declined to comment on the matter.

“Based on the pending nature of the litigation, our office will not have comment beyond the contents of the court filings,” AG spokesman Scott Graf said.

The Idaho House of Representatives voted 49-19 to censure Giddings in November, following the recommendation of the House Ethics and Policy Committee that was formally issued in September. Republicans and Democrats in the House lodged a complaint against Giddings over the summer that said she engaged in conduct unbecoming of a legislator. On her Facebook page, Giddings posted a link to a blog that named and included the photo of the intern who said von Ehlinger raped her.

Von Ehlinger, who represented the Lewiston area and resigned his legislative seat following the ethics hearings on his behavior, was arrested on felony charges of rape and forcible penetration with a foreign object on Oct. 8. He pleaded not guilty to those charges in November, and the case is scheduled to go to a jury trial on April 26. Von Ehlinger has maintained his innocence and testified before the Ethics Committee in April that the sexual contact was consensual.

Birch has also filed a civil suit against the Idaho Legislature on behalf of Jane Doe, citing a violation of the Respectful Workplace Policy, emotional distress and defamation of Doe’s character.

According to reporting from the Idaho Statesman, the tort claim filed in September against the Legislature also mentioned Giddings’ Facebook post that revealed Doe’s identity. The claim also stated von Ehlinger and his attorney, Leroy, were told that they should not identify Doe, but claims Leroy did release her information.