Watching Quinn Dunn and his three-legged Great Dane Layla play together at the Ponderay Dog Park, no one would know they had moved to town just a week ago. 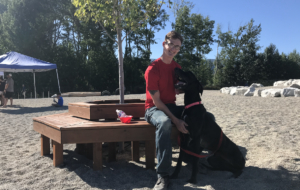 The pair wandered the pea gravel-covered grounds on a recent sunny Sunday afternoon, checking out the various agility course structures, stopping for a drink of water in the shade and sharing smiles and tail wags with other park visitors. They seemed right at home, despite having recently relocated to North Idaho after Dunn, fresh out of the military, accepted a job in Sandpoint. He said he drove past the new park on his way through town and decided he and Layla would try it out before he started his full week of work.

“A dog park is somewhere that people in the community can socialize not only interpersonally but also with their dogs, because a lot of times you’ll have dogs that won’t leave their family — the only animals they’ll see are the ones on their property,” Dunn said. “This definitely gives the people of Sandpoint and the surrounding area an opportunity to socialize and allow our animals to spend time with each other.”

The two-acre Ponderay Dog Park, located next to the Panhandle Animal Shelter on Kootenai Cutoff Road, consists of separate areas for small and large dogs, a covered entrance and gazebo, agility course, plenty of seating space and a walking path around the park’s outer perimeter. Though the park won’t have its official grand opening until Sunday, July 28, dogs and their humans already frequent the space.

“What we’ve been seeing, even on Facebook before we opened, is people trying to arrange play groups,” said PAS Executive Director Mandy Evans. “The reason for this dog park is definitely the dogs, but the benefit that it provides people — that’s meaningful to us, too.”

For Evans, it’s a vision come to fruition. Thanks to a $25,000 grant from national pet training brand PetSafe, the shelter had the idea to open a park next door. However, the grant would only be enough to fence the property.

That’s where Steve Nybank came in.

Nybank, a retired airline pilot with a soft spot for pups, originally approached Pend Oreille Veterinary Service about the possibility of a dog park in the Sandpoint area. When they pointed him to Evans, the idea became a reality in short order. From the fundraising, scheduling and layout all the way to the tree species planted in the park, Nybank had every detail covered. Only nine months passed between proposing the project to the Ponderay City Council and seeing it open to the public.

At a private park opening for sponsors and supporters July 21, Nybank expressed gratitude for the various contractors, landscapers and other businesses who contributed to the project.

“If it wasn’t for you folks putting your work aside, bringing your labor, your materials, your dollars to this park — we wouldn’t have this,” he said. “I’m very proud of the community and very proud to be able to be a part of having this happen.”

The official grand opening celebration for the Ponderay Dog Park is Sunday, July 28 from 3-6 p.m. Call the Panhandle Animal Shelter at 208-265-7297 for more info.