Mad About Science: A tale of two birdies

Whenever we talk about megafauna, we are generally talking about creatures that lived thousands, perhaps even millions, of years ago. Huge, lumbering beasts that humankind was lucky enough to have never interacted with. The two subjects we’re looking at today were huge creatures by today’s standards, and also shared a unique experience that other giant creatures like the megalodon, one of the world’s largest-ever sharks, and Deinosuchus, one of the largest crocodilians, never experienced: the aromatic scent of human fear. 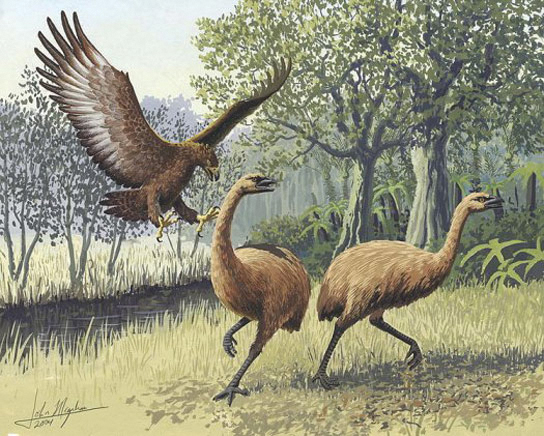 If the Haast’s eagle was around today, it would make a walk outdoors a bit scarier of an adventure. Courtesy image.

Haast’s eagle was one of the largest birds of prey we have on record — believed to weigh around 33 pounds, standing three feet high and sporting a wingspan of more than 12 feet, this bruiser was a specialized killer built to take down some awesome prey. As is true of both of our subjects today, Haast’s eagle was a native of the southern island of New Zealand.

You might be thinking to yourself: “Well, I know it interacted with humans, but such a huge creature in this day and age is impossible. It must have gone extinct 50,000 years ago.”

Hold onto your sunhat, because your mind is about to be blown.

Haast’s eagle stuck around on Earth until about 500 years ago, around the same time European powers were starting to colonize every land they could find. This raptor was so big and awe-inspiring that it is believed to have inspired the legend of the Poukai. The Poukai was a Maori legend of a giant bird that would hunt and kill humans, something Haast’s eagle was fully capable of doing.

I’d like you to imagine yourself strolling about New Zealand in 1300 CE. You have a canoe at the shore and a weapon you’ve managed to fashion from whatever you’ve managed to find in your travels. A shadow rides the thermal updrafts hundreds of feet above your head, obscuring the sun every few moments as it passes — as it passes, you swear it’s getting larger and larger. Suddenly, that shadow is diving straight for you. Imagine a bullet being fired from a gun, but that bullet is 33 pounds and equipped with razor-sharp talons.

The level of primal fear the early Maori settlers must have faced cannot be conveyed to a modern mind. We have no equivalent with which to compare the experience. In the entire history of human evolution, up until the first World War, being hunted from the sky has never been a dilemma humans have had to face — except for a few hundred years in New Zealand.

Fortunately for us, humans weren’t the primary food source for Haast’s eagle.These raptors hunted a much larger game: the moa bird. Moas were an extremely varied type of flightless bird, ranging anywhere from the size of turkeys to the Haast’s eagle’s preferred lunch, a 10-foot tall, 550 pound ostrich-like variation.

I know what you’re thinking: “It tastes like chicken.” Unlike chickens, large flightless birds all have very dark red meat, and have been described as being closer to cow or pork than their skittish cousins. Emu meat has been gaining some traction around the world as an alternative to beef production, while other farmers have begun raising domesticated emus for fun.

As much as I love birds, my interest in interaction ends the moment they become large enough to kill me on a whim.

You may be curious to know how a 30-pound animal can kill something more than 10 times its size. As it turned out, quite easily. The strongest weapon in any raptor’s arsenal isn’t its beak or its talons — it’s gravity. A raptor’s feathers are specially evolved to reduce air drag when flying, and especially during a dive. The faster the eagle can dive, the more force it can deliver when it impacts its prey. In the case of the moa, this initial impact was to cripple or stun the bird more than anything else, so that the eagle could finish it off by cracking its skull with its powerful beak — a technique that was believed to also have been employed on adult humans.

Ideally, when Haast’s eagle would kill a moa, it would eat a bit of it before leaving, then return to the carcass over a period of days — a macabre buffet, if you will. If the eagle were to gorge itself, it wouldn’t be able to fly again. This wasn’t a tremendous problem for the eagle until humans showed up, as up until that point it had no natural predators, which contributed to its ability to grow to such tremendous sizes — a phenomenon known as island gigantism.

Unfortunately for both the moa and Haast’s eagle, they would both be driven to extinction by humans over-hunting the moas. By the time Europeans came to New Zealand in 1642, both of these birds had been extinct for at least 150 years.

If you’re out and about enjoying the sunshine and a smoothie bowl, ponder for a moment how lucky you are that you don’t need to worry about being dive-bombed by a raptor the size of a toddler.