Who are the town’s leading players?

Despite the number of Pokémon haters out there, there’s no denying its impact in changing the way gamers interact with society.

“Pokémon Go” has gotten people out of the house to battle their Pokémon at gyms and to collect items and Pokémon at Poké stops, which are usually placed at city landmarks such as public art, statues, churches, etc. Modules can also be purchased from the in-game store that are “plugged in” publicly to Poké stops, so everyone around benefits with an increased percentage of Pokémon. This person is loved by nearby strangers and friends … well, at least until the lure module expires and your 30 minutes of fame is up. 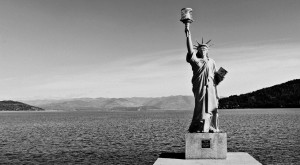 The Statue of Liberty at Sandpoint City Beach is a popular Poké stop. Photo by Ben Olson.

Alright, maybe the claim that players are “getting out of the house” is a bit of a stretch. Sure, their physical bodies are outside, but all their attention is focused on their phones. As a former New Yorker, it strikes me as normal to avoid eye contact, conversation or taking in the sights, and for good reason. Although the city has some of the most beautiful sites in the world, you’re more likely to see a homeless man peeing in the corner of the subway car, so why not keep your eyes glued to a mobile device? With “Pokémon Go,” the rest of the world has become a bunch of Yankees.

Through very thorough field-testing on my part—solely for the purposes of this article alone, of course—I’ve witnessed nights at the ever popular Sandpoint City Beach Poké stops where upwards of 30 people are out for the hunt. Pokémon that appear are shown simultaneously to all users. As soon as a rare or powerful Pokémon is spotted, it’s announced with directions to help others run in time to catch it as well, much like lions hunting gazelles in a coordinated team effort. One of these hunters from Sandpoint, Jaymes Hyder, says he feels, “far less anxious after hours in town, as police can’t assume any suspicious activity is occurring when it’s blatantly obvious that they’re Pokémon Go users.”

To put it lightly, Team Instinct (yellow), is clearly the dominant team in Sandpoint. It is led by captains Davey Breakey (DarthDavey, Level 29), Eric Clark (7BTedBundy, Level 28), and Jaymes Hyder (SharkKing420, Level 26), who coordinate together to claim all the gyms in town and place their Pokémon. They consistently take 10 or more gyms each day, which can then be cashed in for coins via the in-game store. As the highest-level player in town, Davey often plays together with his father, Jeff. He says it “has become a really great way to bond with my dad.”

Clark is a Sandpoint police officer (he assures me he doesn’t play on the taxpayers’ dollar, so no worries there.) Since his job takes up so much of his time, he makes the most of his free hours and is a threat on the streets and in the gyms.

Team Valor (red) is headed by captains R.T. Bruce (RT, Level 26) who early on in the game caught a Dragonite in Sagle. There’s also a very strong and admirable player who goes by the username CameronPhoto (Level 26) …oh wait, sorry. That’s actually me.

As for Team Mystic (blue), Josh Swanlund (JustJohnin365, Level 25) is a clear front-runner for team captain with a Gyrados at CP 2006.

Some of the notable gyms in Sandpoint include Joel’s Mexican Restaurant and the Statue of Liberty at Sandpoint City Beaches. This area in particular—along with the fountain at Jeff Jones Town Square—have become a nexus for Pokémon enthusiasts as there are three Poké stops in very close proximity to each other. Another gym in Sandpoint, for reasons still unclear, is located at Coffelt Funeral Services on Division and Pine, which strikes me as a strange choice by the game developers. It leaves me asking how exactly locations were chosen throughout the city. If Joel’s can benefit from their “Pokémon Go” gym assignment, why not other similar establishments? Does this open up a Pandora’s box of sponsorship opportunities for businesses and companies to bid or pay for prime in-game locations? On the opposite end of the spectrum is the Holocaust Museum in Washington, D.C., where officials have asked for the location to be removed from the game.

Truly, I realized the impact of this game on my second day playing, when I decided to swing by the gym located at the roundabout in town. As I got close to being in range, I passed a group of maybe five “Pokémon Go” players who began to shout at me, “Hey kid, get away from that gym. This is our gym! Keep on walking.” It’s no joke, Pokémon gangs and foot soldiers guard and protect their territory. It brings its share of strange moments, like being called a “kid” by a bunch of teenagers at the age of 27.

Out of the total 721 total Pokémon, only the first 151 (first generation) are listed so far in the game. These 151 were the only ones available in the initial Gameboy games, which basically dictated my entire fifth-grade life alongside the Pokémon trading cards. I remember the ecstatic feeling of getting a Charizard in a pack of cards, comparable to finding a rare Michael Jordan or Babe Ruth card. It was just as profitable, too, with me selling the card for $250 to facilitate my obsession.

However, I believe “Pokémon Go” is different. It’s a ground-breaking feat of technology that has elevated this potential fad into a world phenomenon, especially when you consider the generations of Pokémon enthusiasts in line awaiting their favorites that have yet to be released.

Whether you’re a hater or a fanatic, this fusion of our virtual lives into our real ones (and vice versa) is like nothing we’ve ever seen before. Even just under the Nintendo umbrella, I can easily see games like “The Legend of Zelda” and “Super Mario Brothers” utilizing this unifying first-of-its-kind tech.

Just imagine what your favorite game would look like in the real world.