On your marks, get set… swim!

There’s nothing quite like the sight of several hundred people breast-stroking their way to the finish line at the end of the 1.76 mile Long Bridge. And that’s exactly what awaits Sandpoint on Saturday, Aug. 1, when people turn out for the 21st annual Long Bridge Swim.

Now a local institution, it’s hard to believe an event as big as the Long Bridge Swim started with just one man. Local swimming fanatic Eric Ridgway, founded the event in 1994 by getting two kayakers to follow him as he made the initial trek. Enough people heard about it and were interested that the following year, over 70 people registered to swim the Long Bridge. Sixty-eight of them ended up actually participating. Ridgway had the idea to turn the swim into a community event. Some people thought it wouldn’t work out. Others thought it was a great idea. 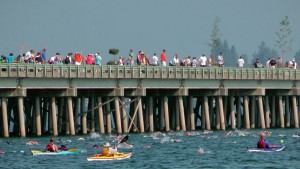 Today there are well over 700 swimmers who participate in this fun community event.

Ridgway emphasizes that his number one concern from the beginning was safety. He created a multi-layered safety protocol that other events have come to follow. He took it into his own hands to reach out to the sheriff’s office, U.S. Coast Guard Auxiliary, Bonner General Health and fire department, while recruiting a multitude of spotters, kayakers and jet skiers to ensure the safety of the swimmers.

Founder and director for 19 years, Ridgway expresses deep satisfaction for the outcome of his event as well as appreciation for the community that supports it. The idea was to make the swim accessible to the average citizen—not a competition specifically for the elite swimmer.

Zuberbuhler had an eye-opener in 2009 when there were a few drownings in Bonner and Boundary County. He soon realized a surprising number of people in North Idaho who didn’t know how to swim. He went to Bonner County Parks and Recreation as well as the school district and created a program funded by donation and sponsorship of the Long Bridge Swim. The program brings kids, starting in third grade, to Sandpoint West Athletic Club to take swim safety courses and swim lessons every so often. Special ed students take a class every Monday, nine months out of the year. Lessons continue up into middle school.

“No child in this county should leave third grade without knowing how to swim,” Zuberbuhler said.

As someone who has lost a sibling to drowning, I am a firm supporter of this program, and I strongly encourage you to get a hold of Zuberbuhler if you know any child or adult in need of swimming lessons or safety courses.

In fact, all the sponsorship and donation money goes toward teaching kids how to swim. And if you were wondering where the registration money goes, it’s definitely not to the people running the swim. All of those people are volunteers and work purely to keep a positive community event going. Registration money goes to different things like the machine that picks up goose droppings at City Beach and the 12 pilings that Jim Woodward from Apex Construction replaced this winter. Zuberbuhler believes in putting the money towards these type of investments that will last many years after he is gone.

The Long Bridge Swim team makes it easy for both residents and visitors to register, jump in the water and swim toward the glory of crossing the finish line. The behind-the-scenes people deserve some glory too, though. There are eight department chairs that cover everything from food to insurance. About 50 people coordinate the hundreds of volunteers but there are a few people who go above and beyond, including Karen McClelland, Courtney Sanborn, Wesley Dustman, Donnavan Leavitt, Sharon Bistadeau, Gretta Warren, Suzy Miller, Keith Hertel and Meleah McNair, Shawna Prummer, Ben Thompson and Gina Woodruff.

If you are interested in assisting in sponsoring the race as well as the swim lessons for kids and adults who don’t know how to swim, go on the website listed below and see how you can sponsor. If you cannot sponsor but still want to help, contact with Courtney Sanborn and volunteer to be a safety kayaker alongside the swimmers next year. She can be reached at [email protected]

In order to participate in the swim, register online at www.longbridgeswim.org or via mail. Registration closes Friday, July 31 this year, with registration occurring from 5:30-7:30 p.m. at Sandpoint High School. If you don’t register in time, you always have the whole rest of the year to train and sign up for the 2016 Long Bridge Swim.

For more information, visit the website or get in contact with current LBS director, Jim Zuberbuhler, at (208) 263-2010.