Nothing beats a good hunting story

North Idaho’s love of hunting will take center stage at the Panida Friday evening as the Full Draw Film Tour makes a stop in Sandpoint. 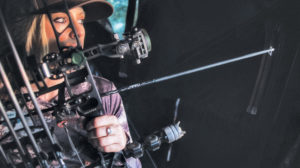 Part of the series “Pursue the Wild,” hosted by Kristy Titus, will run during the 2018 Full Draw Film Fest. Courtesy image.

This is Jade Helmich’s second year running the tour, an endeavor he started with a few friends in Lewiston. Full Draw is dedicated to stories of bow hunting and is now in its eighth season. Helmich said he’s enjoyed taking the reins.

“I love seeing all the hunters that come to the show and are excited to mingle with other like-minded individuals and get stoked about hunting,” Helmich said. “It’s pretty hard to beat that.”

Full Draw isn’t something you can experience on your average televised hunting network, Helmich said.

“The films we have on this tour are better than TV — they have a better story,” he said. “They’re not constrained by sponsors and commercial spots. The storylines can be emotional, but uplifting and exciting, too.”

He said there will be chances to win two Hoyt bows, First Lite apparel, a pair of Crispi boots and every child who attends will be entered to win a youth bow.

Helmich said he thinks Sandpoint in particular will enjoy this year’s film lineup.

“I know people in Sandpoint love their elk hunts,” he said. “This year, six out of the 10 films are elk hunts, so come, bring your buddies, drink a cold beverage and get stoked for the upcoming seasons.”