Sandpoint’s Gary Payton talks about the future of climate change

It was an emotional moment when French Foreign Minister Laurent Fabius gaveled approval of the Paris Agreement last Saturday night. Over 13 demanding days, representatives of 195 nations at the Conference of the Parties, 21st Session (COP21) hammered out an historic agreement intended to slow the onrush of human-caused climate change, assist developing nations in adapting to impacts, and accelerate the transition to low carbon economies. 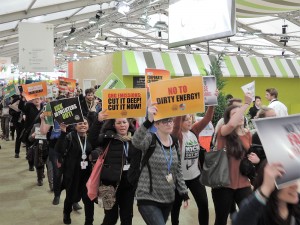 The preamble of the agreement acknowledges the challenge succinctly, “…climate change represents an urgent and potentially irreversible threat to human societies and the planet…” The science is settled.  And, as Elizabeth Dirth, the Vice Chair of 2050 Scotland’s Youth Climate Group boldly told a COP21 audience, “We caused it. We’re threatened by it. We need to fix it.”

Key points of the Paris Agreement include:

•Goals: keep the rise in average global temperature to “well below” 2 degrees C (3.6 degrees F) and aim to limit the rise to 1.5  C (2.7 F). By some point after 2050, human caused emissions should be reduced to a level which forests and oceans can absorb.

•Targets: countries agree to set national emission reduction targets every five years. 180 nations brought targets to COP21. The review mechanism will continue to “bend the curve” downward by reviewing and strengthening the targets. 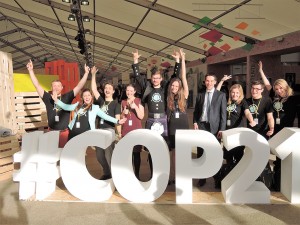 2050 Scotland’s Youth Climate Group are part of the next generation’s leadership to apply solutions to climate change. Photo by Gary Payton.

•Financing: wealthy countries should continue to offer support to poor countries to adapt to the impacts of climate change. The current pledge is to provide $100 billion annually by 2020 into the Green Climate Fund.

Defenders of the pact offered quick appraisals. “…this Paris outcome is going to change the world.” “…a turning point in the human enterprise, where the great transformation towards sustainability begins.”  “…an unprecedented demonstration of how global cooperation has the potential to steer us on to a pathway of a safer future.”

Detractors were equally quick to weigh in. “It’s a fraud really, a fake.” “Lots of promises and lots of issues left unresolved.” “The agreement contains mainly moral appeals and lip service.” “Unenforceable.” “Too slow.” 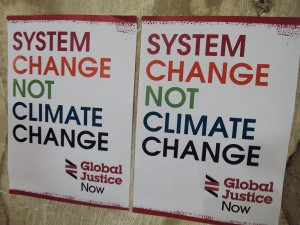 Posters like these hang outside the conference. Photo by Gary Payton.

Last Friday I attended a climate event with hundreds of others from around the world. As the speaker rose to address the audience, he reminded us, “We live on the edge of hope and fear.” His words resonated deeply within me.  I know that even if all the national pledges to reduce emissions are kept, we only “bend the curve” downward to about 2.7 C above pre-industrial levels. Across the coming decades, extraordinary efforts will be required by nations and their sectors of society to reduce to a 2 C increase (the target set in 2009) or the stretch goal of 1.5 C (the target reset in 2015). I know that advancing temperatures will continue sea level rise threatening island nations, contribute to further species extinction, expand drought stricken areas, strengthen global storm events, and more. Yet, I cling to hope and resist succumbing to fear.  I hold on to that hope because of what I witnessed in Paris.

Governments at all levels (national, state/province/city) were well represented.  National representatives may have shaped the Paris Agreement, but much of the progress toward reducing CO2 emissions will happen at intermediate and community levels of government.  Steps like encouraging energy efficiency and advancing the use renewables like solar and wind.  Will we in Idaho and Bonner County play our role?

In an underreported aspect of Paris, Bill Gates and Mark Zuckerberg joined with other investors to launch the “Breakthrough Energy Coalition.”  The group will invest billions to accelerate research and development in innovative clean energy.  Beyond industry giants, the display space surrounding COP21 showcased dozens of worldwide companies highlighting their new technologies to move toward  low carbon economies.  We have only to think of Sandpoint’s Solar Roadways to see but one of these emerging companies.

In official and unofficial gatherings, Paris was energized by the participation, passion, and demands of young adults.  While their generation may not have “caused” the advance of climate change through excessive consumption, this generation will be living with the immediate impacts and serve as leaders developing and applying solutions.

The Paris Agreement represents a milestone in decades of work by government officials, scientists, environmental activists, and average citizens.  It is not a perfect agreement.  It took too many years to get here. But, I submit it adds momentum to our collective efforts to address the causes and impacts of climate change.  Each of us as citizens of the world has a responsibility to live more lightly on the planet.  The time for denial is past.  The time for our renewed actions is now – government, business, faith community, NGOs, and individuals.  Me?  My next step is to offset the carbon emissions of my flight to and from France through a contribution to Climate Stewards.  What’s your next step?