Lenny Guerrero knows what it’s like to not have a roof over his head. On the one hand, Guerrero is a tech-savvy entrepreneur, a self-starter and innovative thinker. On the other hand, his lifelong bout with anxiety and bi-polar disorder has often left him in situations of despair.

“I’ve been homeless for the past year,” said Guerrero. “It was something I was thrown into.”

Guerrero is frank and honest about his issues, not shying away from the uncomfortable reality we often sugarcoat: “I don’t want to come across as a pity story, but the truth is, we get into situations sometimes that are beyond our control. The reason I got into my situation is because of my mental and emotional state. I’m professional enough to know what needs to be done, but I couldn’t get the help I needed. I’ve spent the past 15 years in therapy and counseling and have been making tremendous progress the last few years.”

Instead of succumbing to a downward cycle, Guerrero is looking forward to how he can solve an issue that has plagued Bonner County for years: how do you provide housing to those who can’t afford it, while also offering job training? Guerrero might just have the answer. 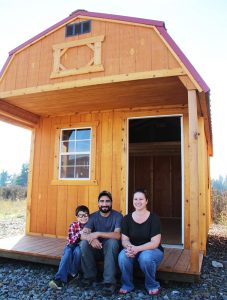 Lenny Guerrero, center, sits with his son Ezra, left, and business partner Dani Parsons, right, on the porch of a portable building that will be very similar to the cabins proposed for Hearts to Homes. Photo by Ben Olson.

Guerrero’s idea, along with business partner Dani Parsons, is to provide a community of portable cabins clustered around a place of business, which would serve as the anchor to the community. The cabins would provide a semi-permanent place for people to stay when they can’t afford rent elsewhere, and the businesses attached to the community would give them a place to work off their rent and learn valuable skills that will help them find jobs in the future.

“I got the idea of building tiny houses two years ago, when I was in Denver,” said Guerrero. “I tried to get involved with a tiny house village there, but it didn’t work out. I went on a manic high for a couple weeks and that’s what got me into my homeless situation.”

Guerrero recovered and returned to Sandpoint so he could be with his seven year-old son Ezra: “I slept by the railroad tracks all summer and met the good people at the Food Bank and offered to volunteer. I realized what I needed to do. I went to a board meeting at Creations and it seemed more of my style. I didn’t want to work to get rich, I wanted to get involved with a nonprofit.”

It is Guerrero’s aim to establish a nonprofit called Heart to Home to get the housing project off the ground.

Guerrero and Parsons have drawn up a prospectus outlining costs for potential investors. The $150,000 project includes six dry cabins, shared bathroom and kitchen facilities, job training, annual salaries for the two co-presidents and incidentals like utilities, blankets and hygiene products.

The project will have a few phases. Initially, Guerrero and Parsons want to start with smaller units to build up a stable working community. He’s already found a few people who want to sponsor building the cabins.

“Right now, it’s important to provide simple cabins with access to the things they need done, the necessities,” said Guerrero. “At least they’ll have somewhere to sleep inside and get warm.”

The cabins will be simple, rudimentary living quarters. Bathroom and kitchen facilities will be centrally located within the village and shared amongst the residents. When the family has gotten more of a foothold, they can then transition into a larger unit.

“The goal is to create a stable, working community,” he said.

The businesses attached to the village will feature various services such as construction, smart phone repair and other user-friendly industries. Guerrero’s own extensive work experience will help dictate the services offered, as well as provide job training to the residents.

“I started working at a young age,” he said. “I did landscaping and HVAC construction. Then I had a mobile auto detail business when I was 16. I also started a Dish Network dealership and did a lot of home construction.”

While Guerrero applauds the tiny house movement, he sees his project as a cheaper alternative, utilizing portable buildings that cost fractions what a tiny house costs to build.

Guerrero sees his project as a way to curb the rising issue of homelessness in Bonner County, which is often overlooked because it is not in plain site.

When asked how his project differs from a traditional homeless shelter, Guerrero said, “They don’t direct you to the right resources at a shelter. I’ve had some bad experiences at shelters. I’ve gotten really sick. Everybody’s sick there, and they are very unsanitary. People use the bathroom right next to you on the floor, the lines are really long to get a bed.”

Guerrero and Parsons are currently submitting their proposal around to obtain a location and funding. They initially had a site picked out near the University of Idaho extension campus on North Boyer, but it fell through. They are also interested in grants, monetary donations, building materials, transportation donations, food, clothing, bicycles, skilled labor and volunteers to make this project a reality.

“We want to build a community,” he said. “We’re not going to turn anyone away for not having money. We’ll figure out a sliding scale, or they can do work in exchange for rent. There are a lot of people on the verge of being homeless. Maybe they’re in an unsafe place, a dysfunctional situation or a place of domestic abuse. Whatever the reason, they should have a safe place to live. We want to provide that for them.”

If you are interested in participating in the project, or donating much-needed resources, please contact Lenny Guerrero at 208-610-5088, or email [email protected] for more information.