What to expect with the upcoming Cedar St. facelift

Phase one construction is slated to begin on Cedar St. on May 21

With Sandpoint drivers settled into the new traffic patterns, this summer will mark the beginning of more transformative changes to downtown streets. 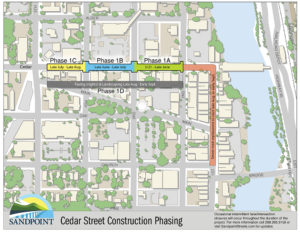 Construction begins next week on phase one of a downtown revitalization project designed to reshape the way locals walk, explore and interact with the shops and attractions of the downtown core. Starting May 21 and progressing until Sept. 7, the work will center on Cedar Street and involve demolition, excavation, utility installation, grading, concrete placement, electrical work, landscaping, irrigation, asphalt paving, and striping, according to city officials. Earthworks Northwest will handle construction duties, and all businesses will remain open while construction progresses.

The upshot is a Cedar Street equipped with new amenities, infrastructural upgrades and an overall improved feel for those weekend downtown visits.

“The new and wider sidewalks, I think, will add significantly to the comfort and feel of the street, furthering downtown as a destination,” said Aaron Qualls, Sandpoint director of planning and economic development. “This will also expand opportunities for sidewalk cafes and other seating areas which can add vibrancy at the street level.”

“The seat walls in front of the stormwater planters at the corners, I think, will also be another noticeable amenity which serves a dual purpose:  dissuading people from walking into the planters while creating a comfortable place to sit,” Qualls said. “The stormwater planters themselves help treat water runoff before it enters Sand Creek in order to help protect water quality.”

“New lighting, I think, will also be very noticeable, adding comfort, safety and a sense of energy during evening hours,” Qualls added.

In order to mitigate the impact and invasiveness of the construction, it will be rolled out one block at a time. During block-by-block work, that area will be closed off to drivers. Work begins from May 21 to late June on Cedar between Second and Third avenues, advances to Cedar between Third and Fourth avenues from late June to late July and finishes on Cedar between Fourth and Fifth avenues between late July and late August. Following the block-by-block work, Cedar will be closed from Second to Fifth avenues for about 10 days, allowing for final paving, striping and landscaping. It will take place during evening hours to minimize impact to downtown business and event activity.

According to city officials, the work will be carefully planned to avoid restricting access to businesses. Workers will also manage dust with water during workdays and throughout the weekend. Nevertheless, residents should expect the typical construction impacts of noise and traffic detours. With a wealth of summer events for downtown Sandpoint already in the works, project heads are coordinating with business owners and event planners to keep the impact to a minimum.

Funding for the project comes from a Sandpoint Urban Renewal Agency and an Idaho Community Development Block Grant awarded by the Idaho Department of Commerce. Phase one is only the beginning of a grander project meant to refresh the look and character of downtown Sandpoint. Next year, phase two of the project is scheduled to begin, which will focus on First Avenue. The work during phase two will bring First in line with Cedar, introducing similar improvements to its appearance and utility. Toward the end of the 2019 work season, the sewer main and laterals along First will also be replaced.

For more information on the project, visit www.sandpointstreets.com.