Net Neutrality: How the ‘first amendment of the internet’ is coming under attack

Last week, the Trump administration intimated that its next move to deregulate broadband internet service companies would be to abandon net neutrality rules established under the Obama administration. The rules were established under President Obama to preserve an open internet and ensure it couldn’t be divided into “pay-to-play” fast lanes for media companies that can afford it. The converse is that those who couldn’t afford it would be relegated to the “slow lanes.”

What exactly is net neutrality and why is it important? In a nutshell, net neutrality is the idea that internet service providers (ISPs) treat everyone’s data equally. This means a work email is transmitted at the same speed as your streaming on Netflix, or transferring money to your bank account online. It also means that ISPs don’t get to choose which data is sent more quickly than others, and which sites get blocked or throttled down because the company didn’t pay extra. 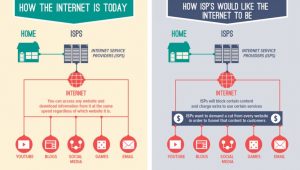 Many describe net neutrality as the “First Amendment of the internet.”

So why is this important? In this era of “any regulation is bad regulation,” the issue of net neutrality is going to impact you more than you think.

President Trump’s new FCC chairman Ajit Pai has announced plans to overturn the 2015 order, effectively gutting net neutrality. A vote on his proposal is due to take place Thursday, May 18.

Supporters of net neutrality include content providers such as Netflix, Apple and Google, who argue that people are already paying for connectivity and deserve access to a quality experience. More than 800 startups, investors and other organizations sent a letter to Pai stating: “Without net neutrality the incumbents who provide access to the internet would be able to pick winners or losers in the market. They could impede traffic from our services in order to favor their own services or established competitors. Or they could impose new tolls on us, inhibiting consumer choice.”

Big broadband companies such as AT&T, Comcast, Verizon and Cox don’t support net neutrality, because they argue the rules are too heavy-handed and will stifle innovation and investment in infrastructure. The companies have filed a series of lawsuits challenging the FCC’s authority to impose net neutrality rules.

What’s a real world example of how the abolition of net neutrality might affect you, the viewing public? Let’s say Comcast decides to establish its own streaming television site. To ensure viewer satisfaction, they could throttle Netflix down unless they pay higher premiums to enter the “fast lane” of browsing. Why does this matter? Have you ever been streaming and had the episode fail repeatedly? Do you continue watching or move onto something else?

Think this is just a hypothetical? Wrong. In late 2014, Comcast throttled down the speed to Netflix until the latter agreed to pay Comcast to fully open the spigot of data.

“Last Week Tonight” host John Oliver referred to this as the “mob shakedown” aspect of a post-net neutrality internet.

President Trump and the GOP have made it known that they are friendly to big corporations, even if it leads to the unfettered accumulation of corporate power. In March, Congress voted to allow ISPs to sell the browsing habits of their customers to advertisers; a move that critics charge will fundamentally undermine consumer privacy in the U.S. Without the rules that were once in place, ISPs can sell people’s data without consent. If President Trump follows through on abolishing net neutrality, the only people that get rich are the behemoth service providers like Comcast, AT&T, Cox and Verizon, who, incidentally, FCC Chairman Pai once worked for. Are you getting the picture yet?

So what can you do? If there’s anything about the internet it’s that a big enough response can really make a splash. In Sunday’s “Last Week Tonight” host John Oliver urged his viewers to write to the FCC to advocate for the support of net neutrality. In classic governmental bureaucratic nonsense, the FCC hid the public comment behind a long URL, confusing forms and hard to access pages and reference codes needed to continue. Public comment should not be this difficult, Oliver stated, which is why the late night talk show host decided to make it easy on the internet at large.

Oliver bought the website www.gofccyourself.com which bypasses all the governmental red tape and takes you directly to the form where you can leave a comment on net neutrality. If you would like to comment on the issue, please click the link above and then click +EXPRESS. You will then be able to comment on this important issue which could redefine the internet as we know it.

I urge you all to go online to the website www.gofccyourself.com and tell the FCC to preserve net neutrality rules backed by Title II. Support an open internet, not sped up or slowed down at the whim of a dollar.