As Idahoans have done throughout the state, Bonner County residents leaned into the unprecedented mail-in-only 2020 primary election — navigating an improvised process and changing deadlines to participate in the election in historic numbers.

According to Bonner County Clerk Mike Rosedale, “it’s looking like 15,100 people requested ballots, which for us is 53.8%, which is really high.”

In an effort to lessen the spread of COVID-19, Idaho Gov. Brad Little ordered that the primaries would be conducted via mail-in ballots, rather than risk exposing both voters and election workers to the virus at physical polling places.

At first, Idahoans had until May 19 to request ballots in the primary to decide legislative and congressional candidates. On May 21, the Idaho secretary of state’s office announced that the turnout would likely surpass the largest of any non-gubernatorial primary election in Idaho history. More than 415,500 voters had requested ballots statewide, representing almost 46% of registered voters. 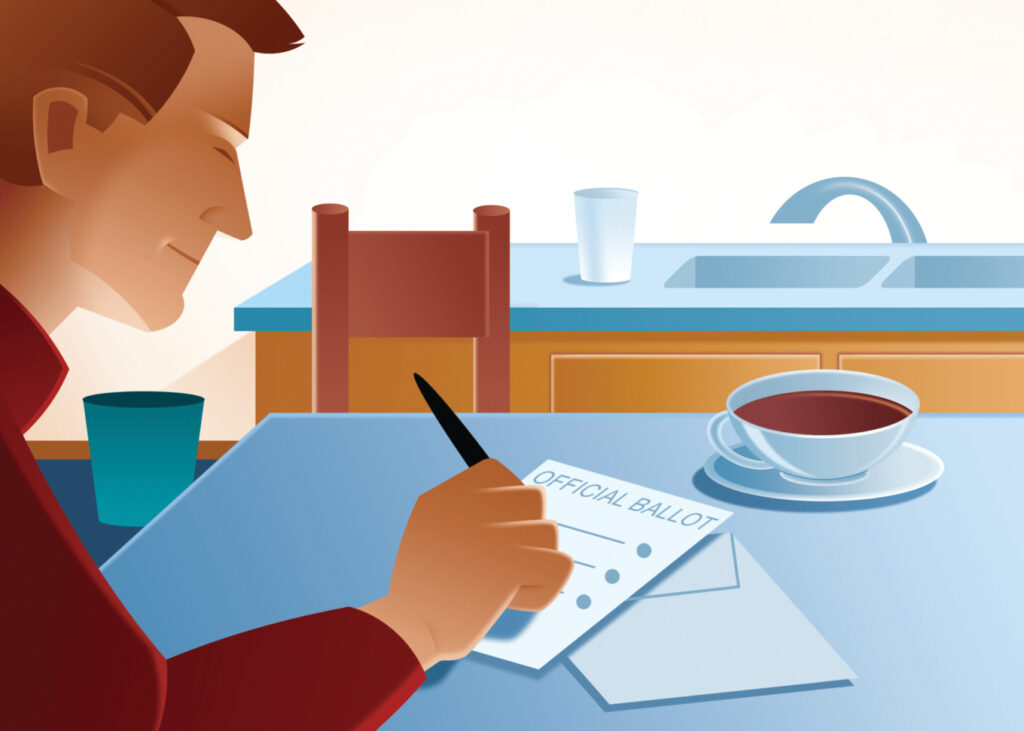 “The numbers truly speak for themselves,” Secretary of State Lawerence Denney wrote in the release. “Voting is a right Idahoans hold dear and they were not going to let the coronavirus get in their way of participating in the May primary election. We want to say thank you to all of the Idahoans who adapted with us through these changing circumstances.”

Circumstances weren’t done changing, though, as Denney’s office on May 22 issued another communication to the 44 county clerks throughout Idaho, telling them that because of a ruling from Idaho District Court Judge B. Lynn Winmill, the deadline for ballot requests would be pushed to May 26 at 8 p.m.

In the statement, the secretary of state’s office said the seven-day extension resulted from a challenge brought by U.S. Congressional candidate Nicholas Jones — vying for the House seat held by Republican Russ Fulcher — who claimed Idahoans were being disenfranchised because the office’s website went down several times ahead of the May 19 deadline, effectively making it impossible for voters to request their ballots on time.

Altogether, Rosedale said about 700 requests came into his office during the week-long extension, helping further push participation to much higher-than-usual numbers.

With that kind of participation comes a potential problem, however, as the court order now gives those voters who filed a request during the extension period a narrow window in which to get their ballots filled out, signed and returned to the clerk’s office by 8 p.m. on Tuesday, June 2.

“One thing that I would emphasize: Bring those ballots in by hand,” Rosedale said. “Make sure that they don’t get hung up in the mail, because it’s not when they’re postmarked, it’s when we get them. We have to receive them by 8 [p.m.] Tuesday [June 2].”

Voters can return their finished ballots to a drop box at the Bonner County Administration Building, located at 1500 Highway 2.

“That way you don’t even have to worry about if it’ll make it in time,” Rosedale said.

“We’re sending them out the absolute fastest we can do it,” but, he added, requests that came in after noon on May 26 were mailed out May 27, so the “best case scenario” is that those ballots will arrive on Friday, May 29.

That gives voters the weekend to fill out and sign their ballots, potentially being unable to drop them in the mail until Monday, June 1.

“In that case, we might not get them until Wednesday [June 2] and they won’t count,” Rosedale said. “I want everybody’s vote to count. That is my job, and if everybody gets to vote then I’ve done my job.”

As it is, Rosedale said ballots have already been “coming in non-stop” since the initial May 19 request deadline, pouring into his office in “massive batches.”

Ballot requests broke down by party affiliation — or non-affiliation, as the case may be — with 2,115 Democratic ballots requested; requests for 2,430 unaffiliated/nonpartisan ballots; and 10,323 Republican ballots requested. As of May 27, Rosedale said his office still had about 100 requests to process — all of which came in on the day of the deadline.

“Four years ago, which would be the most apples-to-apples kind of comparison of a presidential year and the May primary, we had 32.56% and we had 7,300 [voters]. This year we had more than twice the number of voters that we did four years ago,” he said. “From what I understand, all the counties are reporting that exact same thing and almost to the same percentage — to within 2% or 3%, all across the state.”

The massive turnout for ballot requests — which East Idaho News reported May 27 represents the highest voter participation in a Gem State primary “in at least 30 years” — would most likely not have occurred without the mail-in-only process.

“It was looking two months ago like [COVID-19] could be a firestorm, and that’s what [state elections officials] had to base their opinion on — what it looked like two months ago. All you can ever hope to do is make the best decision you can with the information you have at the time, and I think the state did do that two months ago,” Rosedale said, noting that “this way more eligible voters are actually voting than normally would have voted, so that’s a good thing.”

Regardless, “It was a huge turnout and it will be interesting to see what the results are,” he said.