Mysteries of the deep

The ancient history of our lake – Part 1

In this three-part series, we explore the formation of Lake Pend Oreille and the things that may lurk in its unknown depths.

In August 1866, Civil War General Thomas F. Meagher leaned over the rail of the Mary Moody steamboat on his way to a new military post in Montana, pondering in awe at the clear waters of Lake Pend Oreille and the things he saw in its depths.

As the general wrote: “The little harbor is over 60 feet in depth, cold, clear and of a golden brown, owing to the trees so densely crowding in upon it and the noble mountains overhanging it; but so clear that, close to the graveled beach, where the water is fully 20 feet in depth, the smallest trifles, from a fish head to a broken saucer, are shiningly discernible.”

However, the 20 foot depths that fascinated Meagher on the northern end of the lake were no match for the 1,150 feet of water that plunge to the deepest point of the lakebed at its southern end. 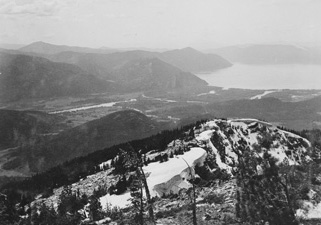 From a high point like Scotchman Peak, one could have witnessed the massive floods that rushed into Lake Pend Oreille at the end of the Ice Age. Photo from the Matt Schmitt collection.

Employing seismic technology, the U.S. Navy confirmed the lake’s true depth in the 1950s. Until then, the lake was estimated to be “half a mile” deep or even “bottomless.”

Though there was no way for residents to know how far down Lake Pend Oreille extended, many of them had lost a rope, a hat or even a loved one to its inky depths, never to be seen again. How was it possible that a lake could be so deep and dark?

Many of our country’s deepest lakes are formed in dormant volcanoes, but Lake Pend Oreille does not have the distinctive round shape, nor is it nestled in the middle of a single mountain. In the early 20th century, scientists began exploring other possibilities.

A 1922 article in Northern Idaho News shared the theory that the lake was sculpted by the slow and formidable power of glacial activity. That same summer, a geologist named J. Harlen Bretz began conducting studies of basalt formations in the Columbia River Plateau that would ultimately blow the standing theories out of the water, so to speak.

While glacial force was certainly at play, Bretz’s work proposed that erosion on the scale of which he observed in the Channeled Scablands could only have been formed by a geological event of cataclysmic proportions. He suspected they may have been the result of a massive flood.

Of course, like most brilliant scientific ideas, Bretz’s theory was immediately rejected by his peers as impossible. At the time, most people believed in uniformitarianism, the idea that the same physical laws that governed the present day had always operated in the same way throughout the past. Bretz’s theory disrupted their tidy explanations.

A few years later, he met another geologist, J.T. Pardee. While working for the U.S. Geological Survey in Montana, Pardee discovered evidence that there had once been an extensive lake that stretched throughout western Montana. He called it Lake Missoula. When the two geologists presented their ideas at a Washington, D.C. symposium in 1927, it kicked off a 40-year debate.

Could it be possible that ancient Lake Missoula and the ravaged formations of the Scablands — hundreds of miles apart — were somehow connected by a flood of epic proportions?

Scientists eventually proved that they were correct, and that the geological event was bigger than anyone had guessed.

“The outflows of Lake Missoula created the greatest floods known to have occurred on Earth,” Roy Breckinridge wrote for the Idaho Geological Survey in 1997. And Lake Pend Oreille was at the heart of it.

The Purcell Trench, part of which we know as the valley between the Selkirk and Cabinet mountains, was formed during the Mesozoic Era through converging tectonic activity. These movements formed the mountains and valleys of North Idaho. At the same time, floods of lava were forming the basalt foundation of eastern Washington. From 2.6 million to about 14,000 years ago, Ice Age glaciers advanced into the area.

At the end of the Ice Age, the Cordilleran Ice Sheet crept south, blocking river drainages. One of those drainages was where the Clark Fork River now feeds into Lake Pend Oreille. The ice built up and formed a massive dam that accommodated — and then held back — the waters of 200-mile-long Lake Missoula.

From around 15,000 to 13,000 years ago, the dam repeatedly experienced breaches that sent up to 530 cubic miles of water rushing into the Purcell Trench at speeds of up to 65 miles per hour. After about 25 years, the dam would reform, the lake would refill and eventually the dam would breach again. Over the course of 2,000 years, scientists estimate that this happened as many as 100 times.

The ice scoured the bedrock of Lake Pend Oreille, an additional 1,500 feet below its current depths, and the repeated floods filled the trench with almost 400 feet of sediment. The flood waters would roar through Lake Pend Oreille and out the southern end of the trench into the Rathdrum Prairie. Effects of the floods can be seen in geological formations from Clark Fork all the way to the Pacific Coast.

Accounts of early travel on Lake Pend Oreille fascinate us, as we step back into the lives of those who lived hundreds of years before us. Looking to the future, General Meagher prophesied, “In a coming time, not yet remote, the repose of those waters will be broken by the shrill scream and paddles of the steamboat.”

If he had been able to see the past, his worries about steamboats would have been overshadowed by the screaming sound of billions of gallons of water. Unfortunately, during the lake’s most exciting events, there may have been no humans to witness them at all, and there are certainly no surviving accounts.

Research provided by the Bonner County Historical Society. Hannah Combs is the museum administrator for the BCHS. To dig into the facts behind the Ice Age Floods, visit the museum (611 S. Ella Ave. in Sandpoint) to read studies written by scientists.